HOUSTON (ICIS)–Production from trona mines in the US increased during much of 2016, leading to a slight rise in soda-ash output.

US production of natural soda ash increased 1.8% from January through October of 2016 over the same period in 2015, according to US Geological Survey (USGS) data.

Demand for natural US soda ash in Asia is expected to increase in 2017 due to a supply crunch in the synthetic Chinese soda ash market. Some Chinese producers were operating at full capacity to fulfil orders, but as winter began in 2016, some plants in northern China were heard to have reduced their operation rates due to environmental issues.

China has unknown reserves of natural soda ash, but it is the largest producer of synthetic soda ash, with an estimated 60 plants. 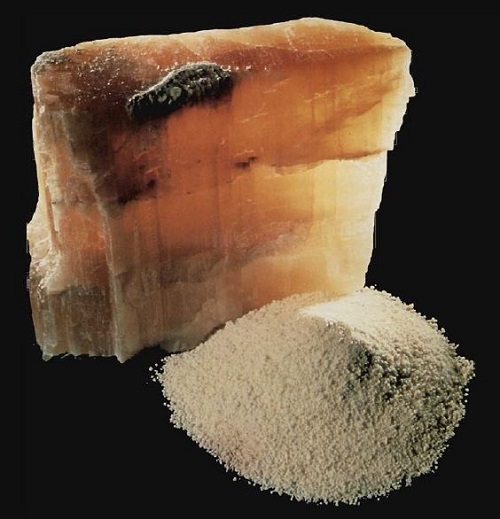 As 2016 ended, US soda ash contracts were not fully assessed for 2017, but should be finalised in January.

Some prices for soda ash were heard to decrease by $5-6/tonne, according to buyers who expect lower 2017 contract prices. This due a small oversupply in the US market in November 2016.

However, other sources reported that price increases of $5-10/tonne are being passed on to some buyers. This due to the supply crunch in the Chinese synthetic soda ash market.

Most US soda ash contracts are multi-year contracts, with two to three years being most typical. The pricing terms of the contracts are re-negotiated annually, usually in October through January.

The chart below shows soda ash prices for the US and Asia, as assessed by ICIS. 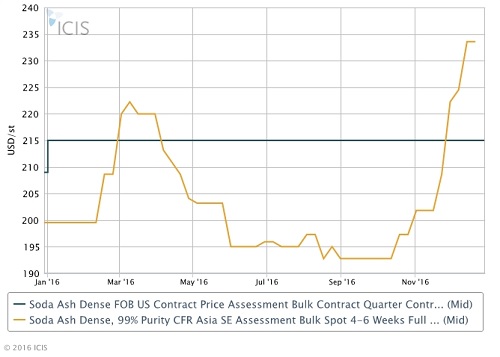 Exports of US soda ash from January through October were 4.98m tonnes, according to US Census Bureau (USCB). 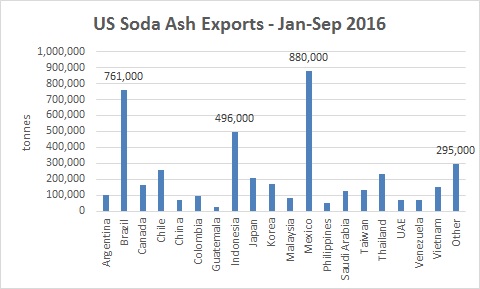 On soda ash imports, Germany was the top importer to the US with 17,200 tonnes shipped from January through September of 2016, according to USCB data. Other major importers of soda ash to the US were Italy and the UK.

TOP IMAGE: Natural US soda ash from trona mine (Image courtesy of a 1998 report by the Wyoming State Geological Society)