HOUSTON (ICIS)–US prices for isocyanates are mixed heading into the new year, with prices for toluene di-isocyanate (TDI) shooting up on global supply tightness while prices for methyl di-p-phenylene isocyanate (MDI) are following a mostly steady trend.

In the TDI market, tight supplies have resulted in significant upward movement in prices in both the US and in other major global markets. BASF shut its new 300,000 tonnes/year TDI plant in Ludwigshafen, Germany, for an indefinite period following a 17 October explosion and fire.

Earlier in October, Covestro declared force majeure on TDI and MDI production in Europe stemming from a problem at its nitric acid supplier. According to sources, the force majeure was lifted in late December and normal deliveries are expected to resume by January. 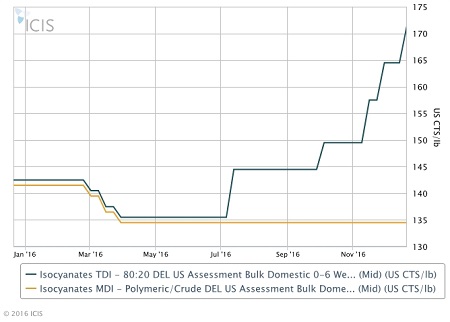 Prompted by these supply shortages, US producers have separately announced consecutive TDI increases of 5-10 cents/lb ($110-220/tonne), 10-13/cents/lb and 10 cents/lb.

Buyers are hopeful that TDI prices will stabilise in the first quarter as supplies begin to normalise, with some buyers on quarterly contracts hoping that they will be able to avoid much of the recent increase movements as the supply outlook may be more balanced by the time they negotiate new contracts.

For 2016, TDI prices have risen by 29 cents/lb from the start of January and by 36 cents/lb compared with the year to date low point during the second quarter.

In the MDI market, prices are following a mostly steady trend as sufficient supply has helped blunt the momentum for any price increases.  However, increase initiatives of 7-8 cents/lb emerged for January in the second half of December in response to rising upstream costs.

Even after production issues stemming from Covestro’s force majeure in Europe and a 20 September explosion at Wanhua’s 600,000 tonne/year MDI plant in Yantai, China, sources in North America stated that they were still able to source their usual volumes.

One buyer said that North American supply had gone from long to balanced as result of supply disruptions in Asia and Europe. The strong increases seen in polyurethane co-feedstock TDI have also stiffened buyers’ resistance to any increase initiatives on other polyurethane raw materials, according to sources.

Compared to the start of 2016, ICIS assessments for US MDI are down by 7 cents/lb while prices held mostly steady between April and December.

As a result of the sharp divergence in pricing trends for MDI and TDI, the spread between the two widened considerably in 2016.

The wide spread that has opened up between TDI and MDI also indicates a divergence between isocyanate pricing trends and feedstock cost movements. 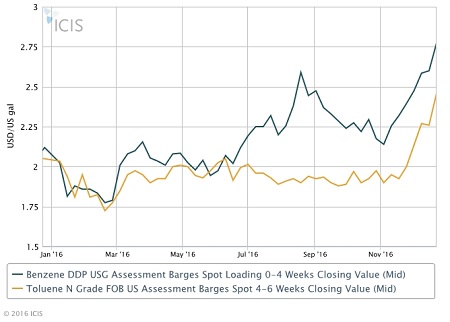