OUTLOOK ’17: US EG increase expected at start of Q1 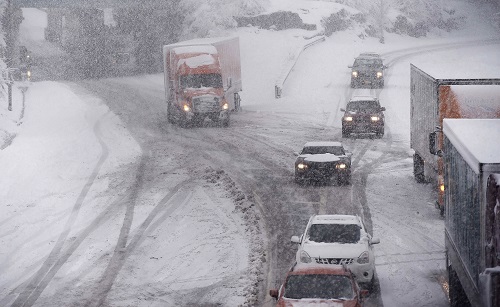 Higher Asian prices open up an arbitrage opportunity for US exports, tightening domestic supply and raising ethylene glycol prices. Demand from antifreeze makers could rise if winter is particularly cold, like last year’s Winter Storm Jonas that hit the northeastern US. (ddp USA/REX/Shutterstock)

Spot import prices in Asia have been surging amid bullish market sentiment fueled by anticipation of tighter supply, stronger crude oil prices and inventory building activities, according to market sources. 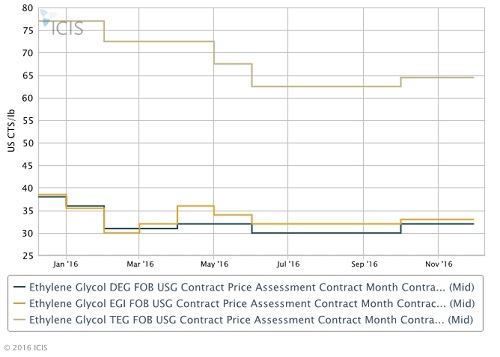 Demand for monoethylene glycol (MEG) is likely to remain slow, as the downstream polyethylene terephthalate (PET) sector is at a seasonal lull, while the antifreeze sector has been slow to take off due to mild weather.

PET resin and bottle demand will pick up over the summer as the weather warms up and consumption of bottled beverages increases.

Mid-winter buying in the antifreeze sector is a possibility, but is dependent on the weather. If winter is particularly cold, MEG demand could see a spike in buying activity from antifreeze makers.

MEG and diethylene glycol (DEG) demand in downstream unsaturated polyester resins (UPRs) will be dependent on how well the economy performs, as UPRs are widely used in an assortment of products including sinks, shower stalls, pipes, tanks, boats, buses, trucks trailers and automobiles.

In comparison, triethylene glycol (TEG) demand is better, though demand during the winter season is dependent on the weather. A colder winter will mean stronger demand for TEG, which is used in natural gas dehydrogenation.

Huntsman will bring down its EO/EG plant in Port Neches, Texas, for a major maintenance in 2H 2017. The maintenance, carried out once every four years, is expected to have a cash cost of less than $50m and last for about two months.

MEG in the US is primarily used in the production of PET and in antifreeze.