HOUSTON (ICIS)–Imported product arriving at a discount and margin pressures are expected to remain the biggest drivers in the US epoxy resin market for 2017.

US epoxy resin contract prices were steady for much of 2016 but fell in January and July, while spot prices fell 14 cents/lb ($309/tonne) during the course of the year.

Producers in the US pushed for several price increases, but were met with strong resistance, given ample supply in the market.

Pricing in 2017 is expected to face similar dynamics, sources said. 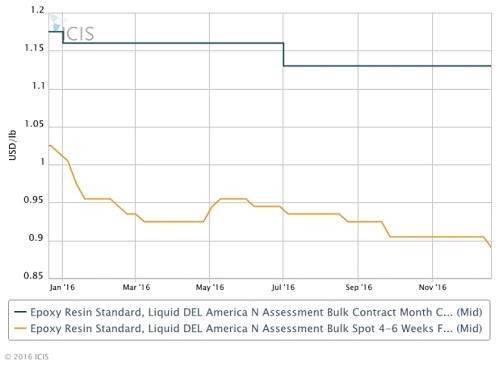 US producers said there will be pressure at the start of the year to increase prices, given upstream increases late in 2016 that are atypical.

US producers said they are still attempting to restore margin loss from the third quarter of 2016, when feedstock costs soared around 8-10 cents/lb.

Buyers in the US have said that although thin margins are a concern for producers, price ceilings in the US will likely remain set by overseas prices.

There is no expectation that Asian epoxy producers or sellers will experience strong enough demand regionally to offset their need for exports into the US.

Given expectations that benzene will remain cheaper in Asia and give those sellers a feedstock advantage, there is little doubt Asian sellers will be able to offer product into the US at attractive discounts.

Overall demand growth and consumption of epoxy resins in 2017 should be steady, with some slight growth related to US GDP levels.

However, a major source of increased demand could come if global crude oil values rise and production increases.

A major source of lost consumption of epoxy resins has been into the oilfield resins sector, and growth in that sector would likely push the US market toward a more balanced position.

Major US epoxy resin producers include Hexion, Huntsman and Olin.