HOUSTON (ICIS)–Capacity for the US paraxylene (PX) market will likely be flat through 2025, according to ICIS data.

Over the years, the economic crisis, along with problems specific to the PX sector, has led to some capacity rationalisation in the US.

While US PX capacity is expected to remain steady, demand should rise because of a new derivative plant that Mossi and Ghisolfi (M&G) will start up in the second quarter in Corpus Christi, Texas.

Given the outlook for demand growth and capacity steadiness for PX, the North American utilisation rate will likely rise to 69% in 2025 from 59% in 2016, according to ICIS data. 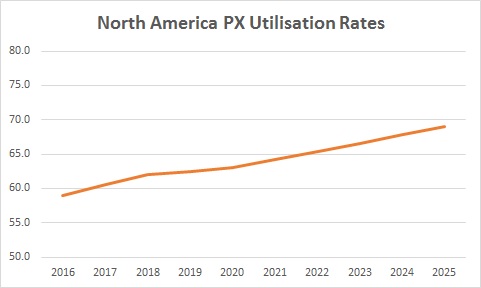 The chart below shows PX prices during 2016. 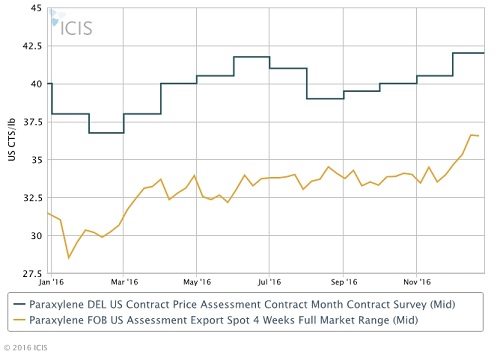 US exports of PX for October dropped 29% year over year, while imports fell 8% over the same period, according to the latest trade data released by the US International Trade Commission (ITC).

The top PX export destination was Mexico, which purchased 28% less volume month on month in October.  Mexico purchased 69% of all US PX exports in October. 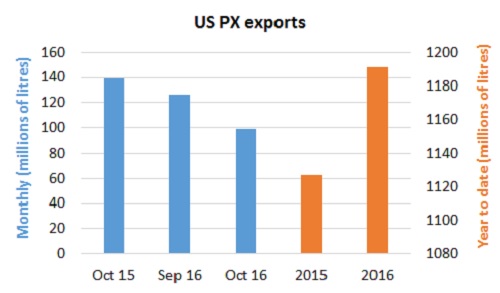 PX is used to make PTA, which goes into PET, which is used to produce beverage bottles, among other uses. PTA is also used in the production of polyester fibre.

The orthoxylene (OX) market share is much smaller than PX. However, OX is used to make phthalic anhydride (PA), which is used as an intermediate in plasticizers.