OUTLOOK ’17: Future of US ethanol tied to energy policy

HOUSTON (ICIS)–US fuel ethanol prices in 2017 will be largely determined by the energy policy of the incoming Trump administration, according to market players.

Participants said that the energy policy of President-elect Donald Trump will affect future OPEC production, as well as Environmental Protection Agency (EPA) mandates and regulations, which in turn could influence the movement of ethanol prices.

One source said the outlook for ethanol in 2017 is currently bearish, as there are broad expectations the Trump administration will alter existing EPA regulations, which in turn could see demand for ethanol decrease.

According to sources, Trump has previously expressed the sentiment that he wants the US to operate from a position of strength and competitiveness, which may translate to self-reliance.

Ethanol prices experienced mixed movement throughout 2016, largely determined by seasonal demand, as well as the movement of feedstock corn. 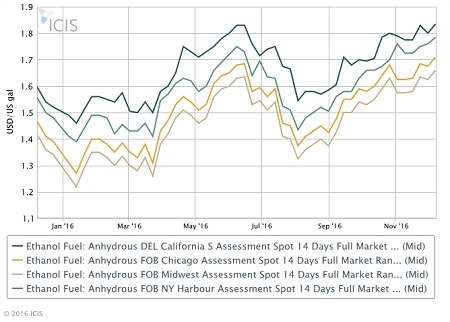 As the US Department of Agriculture (USDA) continued to predict a record yield, corn prices were pressured lower during the second half of 2016, but saw a rebound in pricing towards the end of the year, as cold weather conditions began to impact the Midwest.

Sources said that corn prices will continue to play a significant role in the movement of ethanol prices in 2017. Record crop yields are expected for both next year and the year after, which should theoretically see ethanol prices move downward.

However, corn remains a weather market, and conditions continue to vary from region to region, making prices harder to predict.

The EPA announced its renewable volume requirements for 2017 on 23 November, revealing higher total volumes than were initially expected by the industry.

Some sources viewed this as the EPA’s attempt to secure higher volumes of renewable fuels blended into the nation’s fuel supply, in reaction to the incoming Trump administration.

Gasoline prices are expected to enter 2017 at subdued levels. The EIA has forecast gasoline prices to fall to an average of $2.10/gal in January. 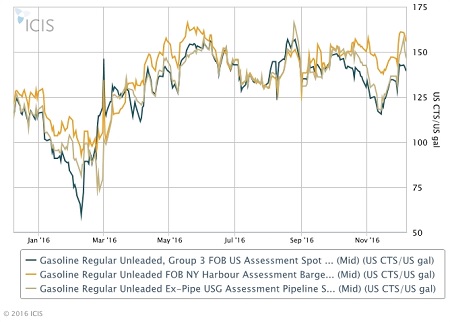