OUTLOOK ’17: US melamine to take cues from global market

Chinese producers have been plagued with all sort of problems, ranging from unplanned maintenance to government inspections. Above, tableware made of melamine is produced in the Netherlands. (Kleon3/Wikimedia)

HOUSTON (ICIS)–The US melamine market in 2017 will take its cues from global supply and demand patterns, which will go a long way towards determining prices in the first quarter and beyond.

Global demand is quite strong, and ongoing supply problems in China continue to have an impact across the world.

Sources said that under normal conditions an average of 20,000-25,000 tonnes of melamine is exported from China every month for global use. However, Chinese exports have not hit those levels for several months now. 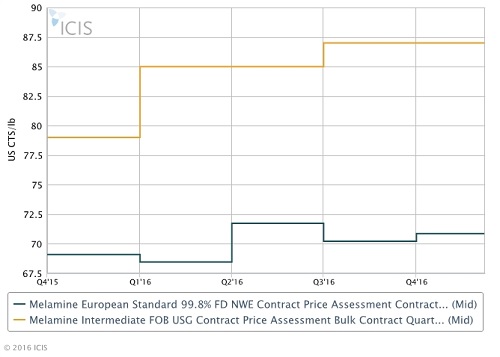 After improving in the second-half of November, the China melamine supply situation worsened in early December.

Chinese melamine producers in 2016 have been plagued with all sort of problems, ranging from unplanned maintenance, plant closures and government environmental inspections. Additionally, at this time of year natural gas is curtailed at various plants in favour of residential customers.

Even though the US does not import melamine from China, or export material to China, the US – and the global market – has been affected by the overall shortness of product in the market.

European producers saw demand for product increase significantly as the China situation worsened during the fourth quarter of 2016. As a result, European producers stepped in and supplied many of the countries that China typically exports heavily to, especially Turkey.

Cornerstone Chemical, the only melamine producer in the US, is believed to have increased exports in November as a result of strong offshore demand.

Prices for Q1 2017 supply contracts in the US melamine market are in the process of being finalized, and should be set by mid-January. Negotiations for the first quarter began in earnest in mid-December.

After conducting two planned turnarounds, which kept its 75,000 tonne/year Waggaman melamine plant in Louisiana down for about 50 days in 2016, Cornerstone is not expected to conduct any maintenance in 2017.

Due to the maintenance, Cornerstone’s exports during the first 10 months of 2016 dropped by 32% compared the same period in 2015. During the same timeframe in 2016 US melamine imports jumped by 42% compared to 2015 – largely because of the shortfall in US production. 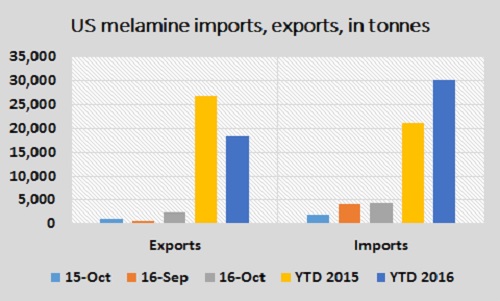