HOUSTON (ICIS)–The election of Donald Trump has created exuberance and global anxiety at the same time by turning the world order on its head on the back of a wave of anti-establishment sentiment.

Expectations of lower taxes, robust government spending on infrastructure and relief from governmental regulations, which will ease financial and environmental control, have boosted stock markets and helped lift the value of the US dollar against a basket of currencies.

US oil producers will benefit from higher oil prices if OPEC’s agreement holds but could also delay the market’s rebalancing.

The US remains the third largest oil producer in the world, behind Saudi Arabia and Russia, and has taken the mantle of “swing producer” by substantially trimming foreign imports, mainly from OPEC producers.

Canada, Mexico and Saudi Arabia are expected to remain the top three suppliers of foreign material.

US oil production peaked at around 9.3m bbl/day in 2015, despite the fact that OPEC had abandoned its quota system in November of 2014. Output declined steadily as investment money dried out, wells were abandoned and a number of companies were driven out of business.  Production has been averaging 8.5m bbl/day according to EIA data. 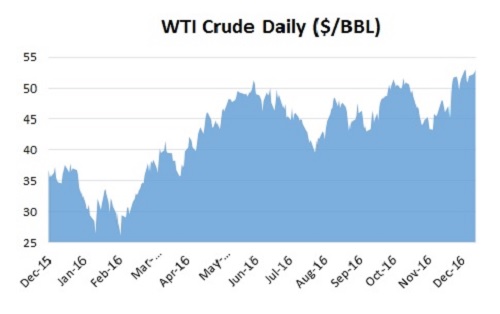 The Baker Hughes weekly oil rigs report has shown shale drillers steadily adding rigs, primarily due to improved efficiency and as a result of hedging price exposure in response to higher oil prices down the forward curve in oil futures prices.

Since the crude oil export ban was lifted by the US government at the end of 2015, US crude oil has been exported to several countries but overall, it has remained a marginal business.

Even though the volume should remain small, it will help limit the pace of inventory accumulation in the US but not necessarily in other locations.

According to the EIA, US crude exports have been averaging 500,000 bbl/day, with Canada the main recipient but with test cargos having moved to other destinations.

Sophisticated US refineries have also benefited from rising demand for refined products in Latin America due to the lack of refining capacity in the area and should maintain an edge in the coming year.

From a geopolitical point of view, the US remains in a strong position of energy security, if not energy independence, and this will prevent the use of oil by other nations as a political tool.