Ongoing tightness in US supply of butadiene (BD) has led to another significant increase in contracts for March, putting prices at their highest levels in nearly five years.

US March BD contracts have settled at various increases of 11-20 cents/lb, separately putting prices for three producers at 110 cents/lb ($2,425/tonne).

Another producer had opted not to nominate an actual price for March contracts, but rather a value equivalent to an industry formula tied to the individual settlements of major UD BD contract producers.

Because of a plant turnaround, the company’s price will not be included in the March calculation, which is said to represent a weighted average of the remaining three settlements. 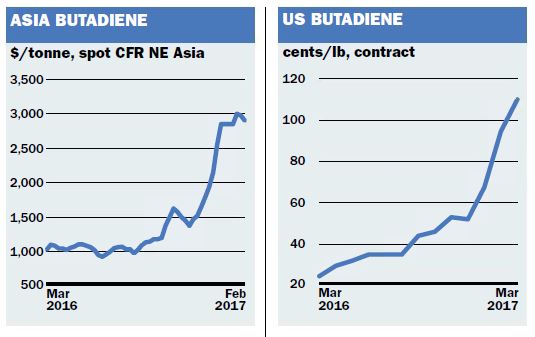 Nevertheless, the March settlement leaves contract prices at their highest levels since Q2 2012. That year, June contracts had settled at 107 cents/lb for three individual producers and 115 cents/lb for another producer.

Market participants had been expecting March 2017 contract nominations to emerge at double-digit increases from February.

Domestic supply has been very tight, with two producers on allocation. Sources said one of those producers have declared force majeure because of some production issues.

Other supplies have asked customers to take minimum volumes on contract obligations.

Excess BD has been hard to find as cracker turnarounds and plant issues have curtailed output of crude C4, reducing feedstock used for the production of BD.

Additionally, a BD extraction unit is undergoing a turnaround in February and March, while another unit is expected to shut down for planned maintenance in March and April.

Constrained supply has opened up opportunities for traders to import volumes from other regions, including Asia. Asia’s BD players are locked in a stand-off amid a widening gap in buying and selling ideas, with sellers considering moving more cargoes to the US market.

It’s a game of ‘who will blink first’ between Asian producers, traders and deep-sea suppliers, and their regional customers, which have retreated to the sidelines after a three-month bull run in BD prices, market sources said.

“I am hearing buying indications at as low as $2,300/tonne CFR [cost and freight] NE [northeast] Asia, which shows that Asian buyers are not keen to import BD while Asian suppliers are targeting the US spot market,” a trader said.

Expectations of further declines in BD prices prompted the downstream synthetic rubber (SR) makers to retreat to the sidelines.

In the key China market, domestic BD prices have likewise tumbled recently due to an oversupply amid falling SR prices.

“Asia BD spot prices had climbed up too fast and too sharply and it is time for a correction as the downstream SR prices are weakening and our margins are falling into negative territory,” a downstream SR producer said.

Regional BD prices more than doubled from 11 November 2016 to an average of $3,000/tonne CFR NE Asia on 10 February, largely driven up by strong Chinese appetite for spot cargoes.

“The Chinese overbought BD prior to the Lunar New Year and the BD prices in China are now falling quickly,” the downstream SR producer said.

“We are covered for March and there is no pressure on us to procure any additional spot volumes – we are not hungry,” a major Asian downstream synthetic rubber producer said.

Traders and suppliers in the region, in turn, have decided to ship out their surplus volumes to the US market, which is in tight supply amid cracker shutdowns and plant issues.

“If the US market stays strong, we are looking at another chance to export another butadiene cargo to the US,” a South Korean producer said.

South Korean producers were heard to have sold two BD spot parcels to traders, with a combined volume of 5,500 tonnes at $3,000/tonne FOB (free on board) Korea, for shipment to the US in March.

At that price, however, the deals will not generate margins for the traders since the freight cost from Asia to the US is about $300/tonne, market players said.

“It is a bit risky if the traders are taking position and shipping out Korea-origin product to the US in March as the BD spot price in the US has to jump up to at least $3,300/tonne CIF USG in April,” another trader said.

OTHERS SEEK TO EXPORT

“We are getting enquiries from US customers at $3,000/tonne for BD and we may ship some spot volumes to the US rather than ship them to Asia as the US is much nearer to Brazil,” a source at Braskem said.