While major producers of isocyanates in northeast Asia are likely to bemoan the eventual entry of Sadara into the market, their customers in the Middle East are likely to welcome the event, seeing it as a game changer for supply-demand fundamentals.

Sadara Chemical is a joint venture between Dow Chemical of the US and state energy firm Saudi Aramco. Its chemical complex in Al Jubail has 26 integrated manufacturing plants, which are set to produce over 3m tonnes/year of products, according to previous company announcements.

At present, producers in northeast Asia and Europe mostly dominate isocyanates supply to the Middle East. Currently over half of the world’s toluene diisocycanate (TDI) and polymeric methyl di-p-phenylene isocyanate (PMDI) are produced in manufacturing plants in northeast Asia. 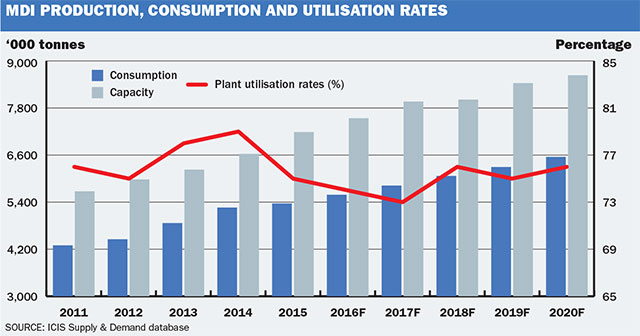 Elsewhere, supply shortages in Europe have slowed the flow from there to a trickle and NE Asian producers have been in command for the past few months.

Sadara has the potential to upset those dynamics. Its home market for TDI and MDI is expected to be the Middle East and North Africa. That means it would be selling isocyanates at likely lower shipping costs and with shorter delivery times, providing stiff competition to current major producers who mostly ship their cargoes from plants in Asia.

According to the ICIS Supply and Demand Database, by 2020 Middle East production of MDI will account for 5.1% of global output, from zero currently. TDI output from the Middle East is projected at 7% of the global total, up from just 1% currently.

For the NE Asian producers, it is all about making hay while the sun shines. They foresee oversupply to persist in the market and believe prices will come back under pressure, possibly forcing some producers to either idle or close their plants.

TDI production is predicted to hit 3.31m tonnes in 2020 while consumption is estimated to be much lower, at 2.25m tonnes, according to the ICIS analysis.

Twenty sixteen was a dramatic year for TDI prices in Middle East. Just in that year alone, TDI prices fell to historic lows before rising to all-time highs in October.

TDI prices began to retreat in November but the decline has not fully reversed and TDI prices are still above where they were when the October jump began.

In fact, TDI prices have been rebounding after bottoming out at $3,200/tonne CFR GCC (cost and freight Gulf Cooperation Council) in January as supply tightened again and already Middle East players are discussing the possibility of a re-visit to the October/November peaks.

PMDI prices also increased in late 2016, though not as dramatically as TDI, with offers at one point reaching a high of $2,100/tonne, their highest since June 2014. Since then, PMDI prices have eased but remain generally supported. 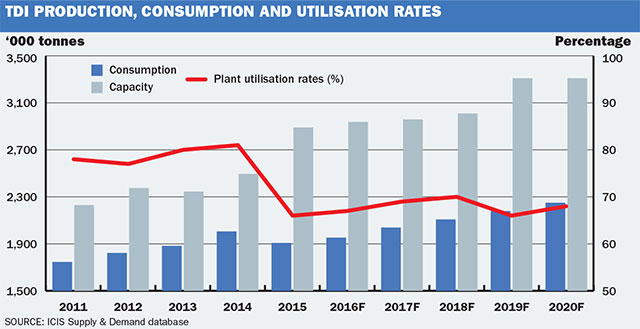 In the week of 19 January, prices ticked higher again amid worries about rising prices of feedstock benzene.

Some market sources said they believed the TDI market is likely to be near equilibrium when prices are just below $3,000/tonne CFR GCC. PMDI prices, meanwhile, are seen in some kind of balance under $2,000/tonne CFR GCC.

Market sources said the outlook for TDI and PMDI prices will hinge largely on the start up of Sadara’s isocyanates production. They also highlighted another source of material that is likely to contribute to the pressure on prices, which is BASF’s Ludwigshafen plant.

The facility in Germany began supplying TDI in late 2016 before an accident at the 300,000 tonne/year plant caused disruptions.

On 23 November, BASF suspended all TDI production at the facility for an indefinite period due to an unspecified production problem.

But just in the week of 13 February, BASF unexpectedly announced it will restart TDI production from the site “in a few weeks,” albeit at reduced rates.

The plant had initially expected to be restarted only in May or June.

“A lot of people have been waiting a long time to see when BASF’s new plant will be fully producing what it is supposed to,” said one European market source.

While BASF’s Germany-produced TDI cargoes are unlikely to be shipped to Asia, they are expected to find their way to the Middle East and Africa, where Sadara hopes to make its mark.

Meanwhile, in the PMDI market, the world’s major producer is currently China’s Wanhua Chemical, which has a total production capacity of 1.8m/year from three units. Wanhua is also planning TDI production but the start up date is not known yet.

Sadara’s PMDI production will add an additional 400,000 tonnes/year of capacity into the PMDI market. Total global MDI production is forecast at 8.65m tonnes by 2020, according to the ICIS Supply and Demand Database. With consumption estimated to be at 6.55m tonnes by that time, there is sufficient evidence to support the view that prices will soften. A typical MDI plant’s output is 70-80% PMDI and 20-30% MMDI or pure MDI, according to market players.

Sadara is about to enter what is generally accepted as an overcrowded and oversupplied market. The key factor at play is that in the Middle East, there are no major isocyanates producers and so buyers there essentially import almost all their materials from either NE Asia or Europe.

What has essentially kept prices propped up is that Sadara’s isocyanates production has been repeatedly delayed. The Al-Jubail facility is expected to include two isocyanates plants – a 200,000 tonne/year TDI and the 400,000 tonne/year PMDI unit. Output of PMDI is expected to start about the same time as most of its other downstream derivative plants, which is estimated to be by mid-2017. TDI production meanwhile is expected by the second half of 2017 at the earliest. “Of course I am worried [about Sadara’s entry],” said a source at a NE Asian producer. “But, personally, I think there will be more delays.”

The impact of a reactor fault that knocked out BASF’s toluene diisocyanate (TDI) plant in Ludwigshafen, Germany, in November 2016 has been mitigated by strong pricing for the material, company CEO Kurt Bock said on 24 February.

The company produces TDI at other locations, including Schwarzheide, Germany, meaning that the company has been able to profit from strong TDI margin growth despite the difficulties at the flagship 300,000 tonne/year Ludwigshafen facility.

Schwarzheide had been slated for closure in April 2016 following the decision to move forward with the larger Ludwigs-hafen investment, but the facility received a stay of execution due to a slower-than-expected ramp-up at the new unit.

The longer-term intention is still to shut the facility down once production is fully ramped up at Ludwigshafen, a company spokesperson confirmed on Friday, but that could be over a year away. The company announced in mid-February that TDI production would resume in Ludwigshafen in the near future, but at reduced rates. The company had a replacement reactor at its Antwerp, Netherlands, site, its key base for isocyanates in Europe, which is in the process of being installed in Ludwigshafen, Bock said.

The long delivery time for a new TDI unit reactor means that final repair work will not be completed until 2018.