While a good amount of buzz at the Asia Petrochemical Industry Conference (APIC) in Sapporo, Japan, was on the coming wave of US capacity, Asia itself is undergoing major structural shifts with China and India leading the way.

China coal-to-olefins (CTO) projects are clearly slowing down, with less than 1m tonnes/year of downstream polyethylene (PE) capacity expected in 2017, according to our ICIS team in China. Many have been pushed back to after 2020, calling into question whether some will be built at all as the government sharpens its focus on reducing emissions.

However, there’s a renewed push to build and upgrade refineries, and construct new naphtha crackers.

“By 2021-2022, there could be about 10 new naphtha crackers on stream. In the past, these would be built by only the major companies such as PetroChina and Sinopec. But now a number of private companies are planning these projects,” said Amber Liu, senior manager at ICIS, speaking at APIC.

Zhejiang Petroleum and Chemical (ZPC) will build a refining and petrochemical complex in two phases, with the first scheduled to start up in late 2018, and the second in late 2021. This includes 10.4m tonnes/year of aromatics, and 2.8m tonnes/year of ethylene (two crackers). It would also include two propane dehydrogenation (PDH) plants totalling 1.2m tonnes/year of propylene capacity.

China’s government will focus on developing seven  refining and petrochemical bases – all along the coast, from Dalian in thenorth, to Guangdong in the south.

Sinopec itself plans to invest yuan (CNY) 200bn ($29bn) through 2020 to build four refining and petrochemical bases – in Nanjing, Shanghai, Zenhai and Maoming-Zhanjiang, said Peter Huang, CEO of consultancy CNCIC, speaking at APIC. This would increase  Sinopec’s ethylene capacity by a whopping 9m tonnes/year, he said.

The resurgence of naphtha cracking as well as PDH could put China over the top in terms of self-sufficiency in downstream polypropylene (PP).

John Richardson, senior Asia consultant with ICIS, pointed out at APIC that China PP self-sufficiency is projected to rise from 82% in 2016, to 92% by 2020. 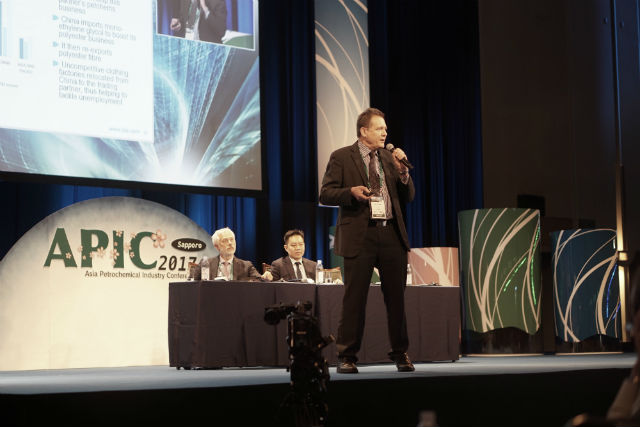 Beyond that, a slew of new naphtha crackers by 2021-2022 could make China fully self-sufficient in PP.

India is on the verge of reaching major milestones,  with the ramp-up of Reliance Industries’ massive  Jamnagar petrochemical complex anchored around a 1.5m tonne/year refinery offgas cracker within a couple of months.

And Reliance is nearing full operations at three of its crackers on the west coast of India using imported US ethane – at Dahej, Nagothane and Hazira, the source said.

And talks are emerging once again about India merging several of its 13 state-owned oil and gas companies which also have downstream refineries and petrochemicals.

“This could connect the refineries and allow them to be more efficient in going further downstream to petrochemicals and chemicals,” said Satyen Daga, CEO of India-based distributor Daga Global Chemicals, on the sidelines of APIC.

Daga also sees India economic growth accelerating with a renewed focus on infrastructure and affordable housing investment by the Modi government, and the full implementation this year of the Goods and Services Tax (GST), a system that unifies the disparate tax codes of India’s 28 states into one federal tax.