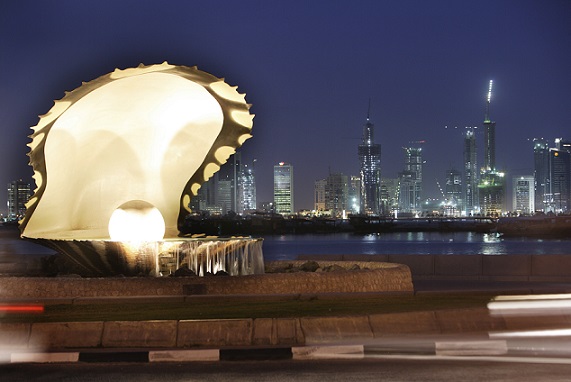 SINGAPORE (ICIS)–More than six months into the isolation of Qatar by its neighbours in the Gulf Cooperation Council (GCC), the small oil-and gas-rich Arab country is swimming in troubled economic waters, but not without buoys.

Having the richest gas reserve in the world, a major share in the global liquefied natural gas (LNG) market and armed with huge foreign exchange reserves, Qatar is paddling through the waves amid the diplomatic and trade blockade imposed on 5 June by Saudi Arabia, along with Bahrain and UAE in the GCC, as well as Egypt in north Africa, because of Doha’s alleged support of terrorism in the Middle East.

The GCC’s two other member countries – Kuwait and Oman – on the other hand, remain on friendly terms with Qatar.

Qatar’s point of vulnerability amid these developments lies in imports as the economy relies on neighbouring countries for a whole gamut of commodities and services, even as basic as food, and is now being forced to look farther afield for new sources, which meant higher cost.

While Saudi Arabia, Bahrain, the UAE and Egypt “constitute a small share of destination markets for Qatar’s exports” and not a major source of the country’s foreign investments, “the boycott and the disruption of economic ties led initially to a sharp drop in imports, requiring a (costly) diversion of merchandise and services trade and financial flows through other neighboring countries,” the World Bank said in its October 2017 Qatar Economic Outlook.

According to a BBC report, about 40% of Qatar’s food came in though the land border with Saudi Arabia.

Three months after the GCC blockade took effect, Qatar inaugurated on 5 September its $7.4bn Hamad port, which is located south of Doha, with the opening of new trade routes via Oman to bypass the usual shipping routes that go through the UAE ports.

The first phase of the port’s development was completed in late 2016, with completion of the second and third phases brought forward to 2020 from 2030, according to Qatar’s Ministry of Transportation and Communication.

Around 2.2m tonnes/year of petrochemical products are exported through Hamad Port, equivalent to 150,000 containers and representing 75% of Qatar’s total container exports.

“The port… will break the shackles of any restrictions imposed on our economy,” Qatari transport minister Jassim bin Saif al-Sulaiti was quoted by news agency Reuters as saying during Hamad port’s inauguration.

Once the three phases of development are completed, Hamad port is expected to have three container terminals with a combined annual capacity of more than 6m containers.

“Efforts to diversify sources of imports and external financing and enhance domestic food processing are accelerating. As a result of the authorities’ quick response, some trade has been re-routed and alternative sources of food supply have been established, allaying fears of potential shortages,” the International Monetary Fund (IMF) said in its report dated 30 August, after completing a staff visit to Qatar.

Qatar’s economy has slowed down in the second quarter, with annualized growth decelerating to 0.6% from 2.5% in January to March 2017, according to the country’s Ministry of Development Planning and Statistics.

A more pronounced deceleration in economic growth may be in the offing in the second half as it would reflect the impact of the GCC rift.

“The economy is struggling to regain momentum following Q2’s anaemic economic growth mostly due to a poor performance in the oil and gas sector,” research firm FocusEconomics said in a report dated 31 October.

“Although the impact of the economic blockade by Saudi Arabia and its allies had a limited impact in Q2, as the embargo was implemented in June, the consequences could be harsher in the second half of the year,” it said.

Qatar’s economy is projected to post a 2017 growth of 1.8%, slower than the 2.2% recorded last year and the 3.6% pace of expansion in 2015, according to consensus forecasts of various analysts in Focus Economics’ November report on the Middle East and North Africa (MENA). 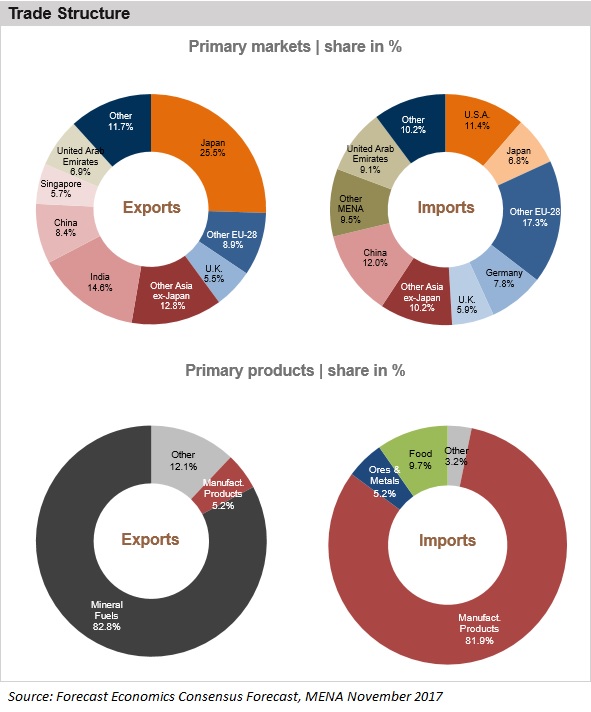 “With no resolution to the diplomatic crisis in sight, the embargo could have lasting effects on the economy,” it said, but added that “Qatar could rely on its massive sovereign wealth fund to support the financial sector and the peg with the dollar,” the research firm said.

Qatar is dealing with foreign exchange volatility of the Qatari riyal (QR) not seen in a decade. The Qatari riyal is pegged at QR3.64 to $1, but its offshore exchange rate has been subjected to wild swings since 5 June, when the economic and trade blockade within the GCC took effect.

The country’s stock market was also rattled, with the index plunging by more than 7% on the day of the blockade announcement. Currently at above 8,000 points, the Qatar Stock Index has shed more than 1,000 points from June.

Quarterly profits of Qatar’s 44 listed companies have fallen below QR10bn in the second and third quarters, according to data available on the Qatar Stock Exchange, although this may not be directly linked to the crisis.

First-quarter profits stood at QR10.7bn, before slipping to QR9.3bn in both the June and September quarters. For the first nine months of 2017, the 44 listed companies’ net profits totaled QR29.3bn, donw 6% from the previous corresponding period.

In the first two months of the blockade, Qatar may have shelled out $38.5bn to cushion the economy against the blows of the sanctions, as estimated by credit ratings firm Moody’s Investor Service.

“Sizable capital outflows in the vicinity of $30bn flowed out of Qatar’s banking system in June and July, with further declines expected as GCC banks opt not to roll over their deposits. Qatar Central Bank has been supporting bank funding: Moody’s estimates Qatar used $38.5bn (equivalent to 23% of GDP) to support the economy in the two first months of the sanctions,” Moody’s had said.

Meanwhile, Qatar’s exports are not expected to take a strong hit given the country’s limited dealings on this trade aspect with its neighbours in the GCC.

The World Bank estimated that the hydrocarbon sector, which constitutes 80% of export earnings and 90% of government revenues “has been largely unaffected”.

Based on the consensus forecast released by FocusEconomics, the country’s exports is expected to post a double-digit growth of 13.1% this year, reversing the 25.9% contraction registered in 2016.

Japan has more than quarter’s share to Qatar’s pverall exports, being a primary market for LNG, with India coming in as a far second with a 14.6% share, while Europe came in third with an 8.9% share, according to data from FocusEconomics.

A month after the GCC blockade, Qatar Petroleum announced a plan to beef up LNG production in the North Field to 100m tonnes/year in five to seven years from the current 77m tonnes/year. Meanwhile, preparations continue for the FIFA World Cup that Qatar will host for the first time in 2022.

For petrochemicals, polymer cargo shipments have slowed as Qatar, via its distribution arm Muntajat, could not sell to neighbouring countries and instead had to look farther to Asia to market products at lower prices in order to gain market share, industry sources said.

A few Saudi polymer buyers, which required specific polymer grades produced by Muntajat for their plastics end-products, had during points of the diplomatic crisis struggled to fill the vacuum left by the Qatari distributor, and were forced to look to their own domestic producers to bridge the supply gap.

Saudi producers on their part were heard to be selling more volumes at higher prices to local buyers given the urgency of requirements.

There were initially delays in Qatar shipments to Asia, prompting buyers to seek discounts on cargoes, but Muntajat has since been addressing the logistical bottlenecks with a promise to be more consistent in delivering volumes to Asian buyers.

Qatar’s total polymer exports of about 1.96m tonnes in 2016, accounted for about 9% of GCC’s total shipments of 21.8m tonnes, according to GPCA data.

The Middle East country has a petrochemical production capacity of 18.9m tonnes/year in 2016, with a 12% share to the GCC’s total, according to data from the Gulf Petrochemicals and Chemicals Association’s (GPCA).

Qatar appears to be adjusting itself well to its new reality but it has yet to reckon the full impact of the economic and trade blockade by its CGG neighbors. The economic cost would increase over time, and gauging by the turnout of the GCC Summit on 5 December in Kuwait, where the Qatari emir was the only head of state present, the end to the regional rift will not happen any time soon.

VIDEO: Asia methanol up on higher cost, restocking ahead of China holiday