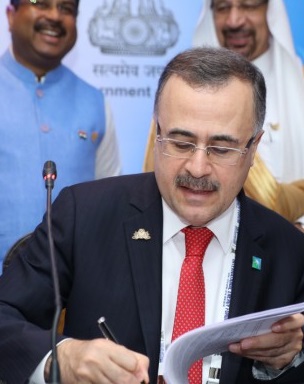 SINGAPORE (ICIS)–State-owned energy major Saudi Aramco and a consortium of three Indian oil companies signed on Wednesday a memorandum of understanding (MoU) to jointly develop and build an integrated refinery and petrochemical complex in the west coast of India.

The project at Ratnagiri in the state of Maharashtra is estimated to cost around $44bn, Saudi Aramco said in a statement.

The proposed refinery will be capable of processing 1.2m barrels of crude oil per day and provide feedstock for the integrated petrochemical complex, which will have about 18m tonnes/year in capacity.

The overall configuration of the project is being finalized by the parties following completion of a pre-feasibility study for the refinery, Saudi Aramco said.

“In addition to the refinery, cracker and downstream petrochemical facilities, the project will include associated facilities such as a logistics, crude oil and product storage terminals, raw water supply, as well as centralized and shared utilities,” it said.

The Saudi energy giant may seek to include a strategic partner to co-invest in the Ratnagiri project.

“Investing in India is a key part of Saudi Aramco’s global downstream strategy, and another milestone in our growing relationship with India,” Saudi Aramco president and CEO Amin Nasser said.

“The signing marks a significant development in India’s oil and gas sector, enabling a strategic joint venture and investment partnership that will serve India’s fast-growing demand for transportation fuels and chemical products,” he added.

The planned Ratnagiri refinery is expected to produce a range of refined petroleum products, including motor spirit and diesel, which will meet Euro VI fuel specifications, IOC said in a filing to the Bombay Stock Exchange (BSE).

“Participating in this mega project will allow Saudi Aramco to go beyond our crude oil supplier role to a fully integrated position that may help usher in other areas of collaboration, such as refining, marketing, and petrochemicals for India’s future energy demands,” Nasser said.

The signing of the mega refinery project in India followed Saudi Aramco’s deal with French energy firm Total for a $5bn petrochemical complex in Jubail, Saudi Arabia, as well as the finalisation of its petrochemical joint ventures with Malaysia’s state-owned oil and gas firm PETRONAS.