SINGAPORE (ICIS)–BASF PETRONAS Chemicals has recently started up new production units in Kuantan, Malaysia, which are part of its second wave of specialty chemical investments at the Gebeng site, a senior company executive said. 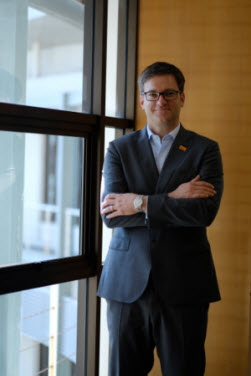 Over the last couple of months, the company has started up facilities producing citral and its precursors at the Gebeng site, BASF PETRONAS Chemicals managing director Sven Crone told ICIS.

The company has also started producing and shipping out to customers its first volumes of citronellol at the Gebeng site, Crone said.

The citral and citronellol facilities are part of the aroma ingredients complex, which will start up in phases, he said.

The manufactured chemicals from the complex are mainly used in home and personal care products and fine fragrances, as well as in the food and pharmaceutical industries.

“The first on-spec product has been successfully manufactured and dispatched to our customers,” he said, adding that the plant’s run rate will be increased “continuously”.

Crone said that the company expects demand growth for its products, like most chemicals, to be “above GDP” this year.

“We are looking at healthy GDP growth of 6-7% for our home markets in south Asia and ASEAN,” he said.

The company is confident about its product portfolio and offering to its customers following the addition of its new specialty products from Gebeng, Crone said.

“These additions are on top of our existing portfolio of products which have enjoyed a solid performance in 2017. Going forward we are expecting a stable to firm business environment for these products,” he said.

In China, the company expects continued strong demand growth for chemical products “even if [the] economy will slow down slightly”, Crone said.

“At the same time, we expect some streamlining of the supply in China. Overall, we expect China to continue being a growth driver for the region,” he said.

Crone added while there is no immediate plans for a third wave of investment at its Gebeng site, it is “well suited for future investment opportunities”.

Russian sanctions have lasting impacts on US supply, prices 

Gain insight on Russian sanctions lasting impacts on US supply, prices as US base oils markets enter the winter.