Major titanium dioxide (TiO2) players are attempting portfolio shuffles to facilitate Tronox’s $2.4bn acquisition of Cristal in what could be the last significant consolidation move in the sector. This should pave the way for the long-awaited deal to close.

US-based Tronox’s planned acquisition of fellow TiO2 producer Cristal from Saudi Arabia-based Tasnee and other investors is facing heavy opposition from regulators. It has been over a year and a half since the deal was announced in February 2017.

The western TiO2 sector has already consolidated to five players – Chemours, Tronox, Venator, Cristal and Kronos Worldwide. In China, Lomon Billions is the largest player. The top five Western players account for about 54% of global TiO2 capacity, according to a June 2018 investor presentation by Venator. 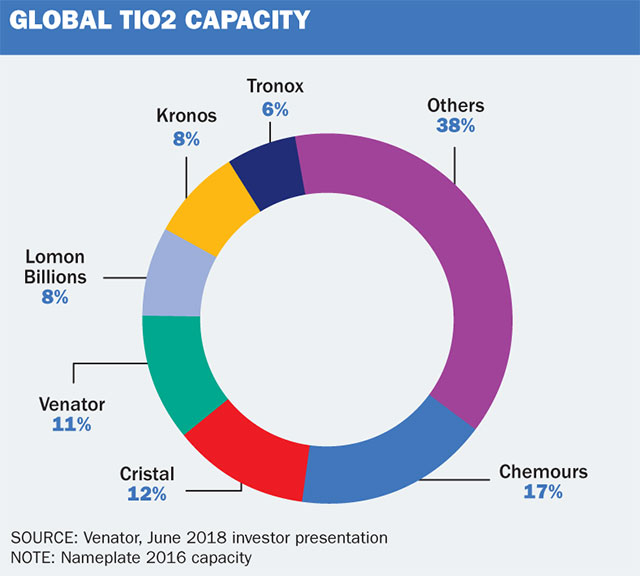 In preemptive moves to gain US and EU regulatory approvals, Tronox is engaging in two separate deals to divest Tronox and Cristal assets to UK-based Venator.

In the US, Tronox has signed a memorandum of understanding (MoU) to sell Cristal’s Ashtabula, Ohio site housing two TiO2 plants with combined capacity of 245,000 tonnes/year to Venator. Ashtabula is Cristal’s sole US production location and its largest in the world, followed by Yanbu, Saudi Arabia, at 200,000 tonnes/year, and Stallingborough, UK, at 165,000 tonnes/year.

In the option-type deal, Tronox would have the right to require Venator to buy Ashtabula for $1.1bn in case the US issues a preliminary injunction to prevent the Cristal deal. If Tronox chooses not to exercise this option, and continues along the regulatory process beyond a certain phase, it can later force the same deal, but for $900m. Venator also could demand that Tronox sells Ashtabula to it for $900m if Tronox doesn’t exercise its right. See page 9 for the full details of the deal.

“We believe this is a positive development removing some uncertainties from the transaction and also the stock,” said Wells Fargo analyst Frank Mitsch, who before this deal was conservatively assuming around $800m in proceeds for Tronox. If Tronox sells Cristal’s Ashtabula complex to Venator for $1.1bn, it would be acquiring the remainder of Cristal at around 3.5x earnings before interest, tax, depreciation and amortisation (EBITDA), estimates the analyst. This would be a big win for Tronox, further consolidating the TiO2 sector by picking up much of Cristal at such a low valuation, though one could argue TiO2 prices are close to peak levels.

The deal would also be a win for Venator, as it picks up a major TiO2 asset for a still relatively reasonable multiple of around 5.5x EBITDA (at $1.1bn) or 4.5x EBITDA (at $900m) as estimated by Wells Fargo, and expands its global TiO2 capacity by 31% to 1.03m tonnes/year.

“At a high level we see this announcement being a win-win for all parties involved… The market likes certainty and this announcement provides a clear pathway to consummate the merger with Cristal regardless of the path taken by the US District Court,” said Hassan Ahmed, analyst at Alembic Global Advisors. “And the fact that Lomon Billions is not a contender for the Ashtabula assets should also be perceived as a market structure positive going forward.”

If Venator moves to buy the Ashtabula asset, yet another player could be involved in the portfolio shuffle.

“Of course, should the proposed transaction on Ashtabula go forward, Venator would have to go through the antitrust process as it’s a 50% owner of Lake Charles chloride TiO2, though we understand Kronos would be interested in buying out the other half. Stay tuned!” said Wells Fargo’s Mitsch.

In a separate deal, Tronox signed a definitive agreement to sell its 8120 paper laminate grade business to Venator for an undisclosed sum. If the EU approves this agreement, EU approval of the Tronox/Cristal deal should be final, according to Tronox.