LONDON (ICIS)–BASF’s subsidiary Wintershall and Austria’s OMV on Thursday said they were closely monitoring the US debate on the planned Nord Stream 2 natural gas pipeline project after the introduction of a bill in the Senate that would impose sanctions on entities involved in its implementation. 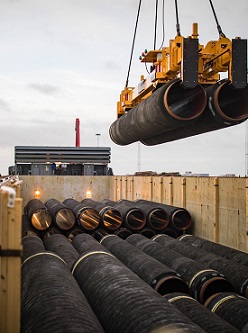 The Nord Stream 2 pipeline would carry gas from Russia to Germany via a Baltic Sea route, the same way the operational Nord Stream 1 does.

The US’ Senate Environment and Public Works Committee chairman John Barrasso, from the governing Republican party, announced the sanctions bill arguing it would aim to “improve energy security” for NATO members.

“[The bill would also] take this geopolitical weapon [of gas] away from Russia by sanctioning the Nord Stream 2 gas pipeline and facilitating the export of more American natural gas to our allies”.

As well as exerting pressure on Europe to further diversify away from Russian gas, the Barrasso bill would allow US gas exports to NATO countries to receive expedited approval by the US Department of Energy by classifying the exports as furthering US national security interests.

Wintershall and OMV are two of five European companies that, as co-creditors, are each providing €950m to cover 50% of the €9.5bn cost of the Nord Stream 2 investment.

Russia’s Gazprom will finance the rest as the sole project shareholder.

The other three European companies are Royal Dutch Shell, Uniper and ENGIE.

Responding to the legislative development in the US, Anna Bungarten, a spokesperson for Wintershall, said to ICIS that Nord Stream 2 would strengthen infrastructure and security of energy supply in Europe, “particularly important given the decline” in oil and gas production in the region.

“With European oil and gas production decreasing, energy imports from Russia are an essential part of the European energy supply. Europe receives about 27% of the oil and 33% of the natural gas it consumes from Russia (Germany 36% and 40%, respectively),” said Bungarten.

“Europe needs a range of different sources and transport routes for its energy supply to ensure its competitiveness. We principally do not speculate on possible sanctions and their effects. We are closely monitoring the development in the US and beyond that cannot comment the matter any further.”

As of the end of last year, €324mn of Wintershall’s €950mn financing commitment had been called up, Bungarten added.

In a statement sent to ICIS, OMV also said it was following developments in the US and highlight that for the moment Nord Stream 2 has not been subject to any sanctions.

“We are following the Nord Stream 2 discussion very closely, particularly in the US. As a business-driven company, we do not comment on single political messages,” said the Austrian energy major.

“So far, Nord Stream 2 is excluded from sanctions. As Europe will face a higher gas demand and a declining domestic production in the future, every additional transport capacity is welcome [and] needed. [It] supports the energy security of Europe.” 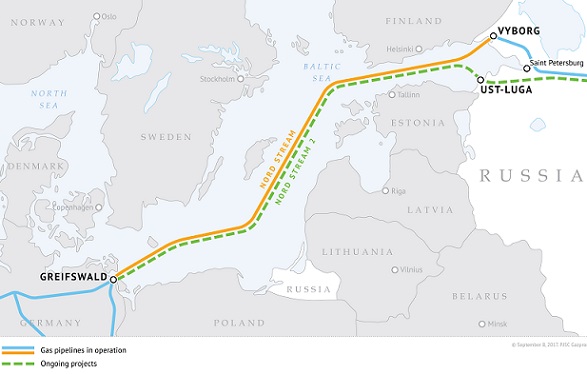 Pictured above: Pipe transshipment in the German port of Mukran destined for the pipeline project
Source: Nord Stream 2

Focus article by Will Conroy