Trade war moves on to chemicals

This week the US-China trade war moved up to the next level when first the US and then China pledged to activate the second tranche of $16bn in 25% tariffs against each other on 23 August.

For the first time chemicals and polymers are targeted by both countries (see the US list here). This may have repercussions for trade flows across many value chains, especially for polymers. 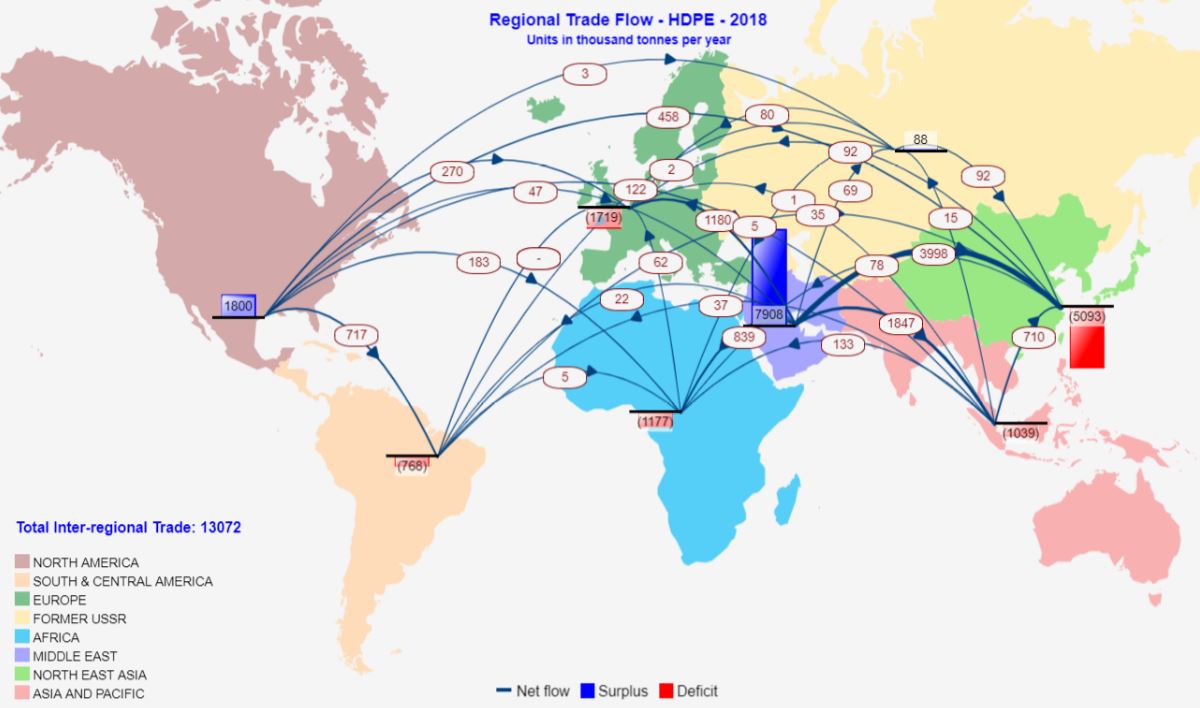 ICIS Supply and Demand database data forecasts that the US will export a total of 1.168m tonnes of HDPE and LLDPE to China this year. Much of this trade could now be jeopardised.

The big question is to what extent will US exports of these products be curtailed or can they be diverted elsewhere?

With 6.5m tonnes/year of new US PE capacity due onstream by 2019, most of it slated for export, China would be an obvious target as it has a large and growing polymer deficit – by far the largest in the world. ICIS forecasts that the US will export 458,000 tonnes of HDPE to northeast Asia this year, most of this bound for China.

MUCH MORE THAN JUST PE

As the China list shows, a vast swathe of other US chemicals will be targeted including naphtha, benzene, toluene, xylene, phenol, ethylene, propylene, butadiene (BD), styrene, acetone, purified terephthalic acid (PTA) and acrylonitrile (ACN). The impact on other markets will depend on how much is currently exported to China and the ability of other markets to absorb product diverted away from China, with Europe and the rest of Asia the main targets.

Owners of any US export-oriented new projects under construction will also need to evaluate and may potentially delay their completion.

The ICIS editorial team covering China reported this week that Chinese companies which have placed orders for HDPE and LLDPE will now have to re-export the product to avoid the tariff.

Some industry sources said the huge volume of re-exporting may lead to a sharp fall in overseas markets where demand is not robust enough to absorb the extra cargoes.

As US imports decline, domestic China PE prices may rise in the second half of the year.

US producers hope that trade flows will adjust and that overall global demand will not be affected by the trade war.

Other countries will divert exports to China leaving US exports to fill the gaps.

This sentiment was echoed by the CEO of producer LyondellBasell last week who told ICIS that global PE markets should be able to adjust to US-China tariffs well, similar to how the styrene markets adjusted to China antidumping duties (ADDs).

Bob Patel told analysts on the company’s second quarter earnings call: “Demand is fairly fixed – it’s just a question of how that demand is met. I think one consequence of the tariffs is that [China] MTO [methanol-to-olefins] plants run harder. The other is that maybe trade patterns will shift such that China’s demand will be met more from the Middle East and perhaps more US product flows to Europe and other places.”

China is one of the US chemical industry’s main trading partners. China already imports 11% of US plastics, worth $3.2bn.

With the Chinese Yuan declining in recent weeks, and making exports cheaper, the US trade deficit with China has actually increased since the first set of tariffs were imposed.