It’s not easy creating shareholder value in the chemical sector. Many major companies are trading at about the same price as they were five years ago – both in commodities and specialties.

This underscores how exceedingly difficult it is to generate value over time.

Of course, chemicals is a highly cyclical business, and the equities have gone through a severe downturn Q4 2018 with only a mild recovery thus far in 2019.

The five-year comparisons would be more favourable if we were doing the analysis from January through September 2018, which saw buoyant chemical equity values.

Trinseo’s outgoing CEO Chris Pappas has clearly outperformed many of his peers. Since its initial public offering (IPO) in June 2014 through Pappas’ last day as CEO on 1 March 2019, Trinseo was up 153% (stock price at close of first day of trading to 1 March close), even after a big decline in Q4 2018. 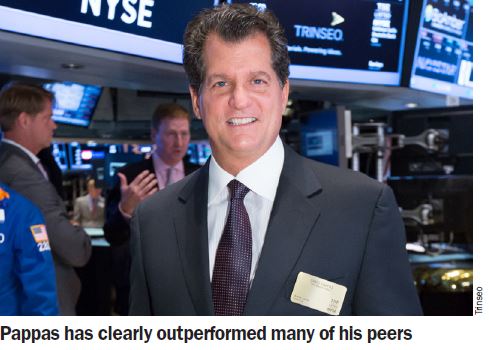 Pappas, who will stay on as special advisor to the new CEO Frank Bozich, spoke to ICIS on 4 March, the day of his retirement as CEO (see page 26). Pappas and Bozich will travel together for the next 6-7 weeks to visit employees, customers and partners. Pappas will also serve on Trinseo’s board of directors.

Trinseo did have the advantage of coming out of the gates in 2014 during a cyclical trough in the styrenics cycle. As the cycle turned up, the company generated more and more cash flow.

But it’s what you do, and also don’t do with the cash flow, that makes a big difference over time.

Capital allocation has been key to Trinseo’s outperformance. The company used its cash flow to not only invest in growth areas, but also to pay down copious amounts of debt.

While the chemical industry is truly capital intensive with large expenditures needed to build world-scale plants, and thus prone to carrying more debt to finance such projects, this debt load often serves to exacerbate the inherent cyclicality when it comes to profit generation.

Trinseo came out to the public markets in 2014 with $1.2bn in net debt and trailing 12-month adjusted earnings before interest, tax, depreciation and amortisation (EBITDA) of $267m, for a leverage ratio (debt/EBITDA) of 4.5x – rather highly leveraged.

What constitutes high leverage is somewhat debatable but take the vicinity of 2.5x as “normal”, with 4-5x and above considered highly leveraged.

The company has since slashed net debt to $709m as of end-2018. Last year it generated $573m in adjusted EBITDA, more than double the level when it came public. Thus, on a trailing 12-month basis, Trinseo’s debt/EBITDA is 1.2x – very conservative for just about any company in any sector.

On a forward basis, taking the company’s estimated EBITDA guidance of $500m-$580m for 2019 and using the midpoint, its leverage ratio is 1.3x.

That puts Trinseo on solid footing for future growth, whether this comes from organic investments or mergers and acquisitions (M&A). It is a rather ideal start for the new CEO, to not have to worry about a debt burden, as he pursues the next phase of development.

While M&A can be a driver for growth, there are risks which can be compounded if the business is not a good fit or if the buyer pays too much.

Trinseo under Pappas excercised discipline on this front, only making one acquisition – that of Italy-based Applicazioni Plastiche Industriali (API) for $90.6m in June 2017 – to bring soft touch polymers to Trinseo’s portfolio of rigid plastics.

Since its beginning, Trinseo has focused on developing innovative products and compounds for its core end markets of automotive, construction, medical and consumer electronics. It is likely to continue focusing on product development in these markets.

Looking ahead, Trinseo’s new CEO Frank Bozich will lead the company even more towards specialties, if his background as former CEO of US-based specialty chemicals company SI Group gives us a clue.

“He’s somebody who really understands the nature of growing companies, particularly in the more specialty oriented direction, which is what our strategy is,” Pappas said.