As Trinseo’s first CEO, Chris Pappas started his tenure when the world’s economy was still in the early stages of its recovery and the styrenics market remained in a cyclical trough.

What was then called Styron would grow as the styrenics market rebounded and the economy recovered. The company would go on to change its name and foster the parts of its portfolio that had the biggest opportunities for growth.

Pappas retired as CEO on 4 March and shared his thoughts about starting Trinseo and what’s next for the company.

Trinseo was created in 2010, when Dow Chemical carved it out and sold the company to Bain Capital for $1.63bn. From its beginning, Trinseo had a two-part thesis on how to grow, Pappas said.

Parts of the company – styrene, polystyrene (PS) and polycarbonate (PC) – were in cyclical troughs, he said.

However, producers were adding little new capacity, and demand was still growing. This combination would cause operating rates to rise, which in turn would improve profits. 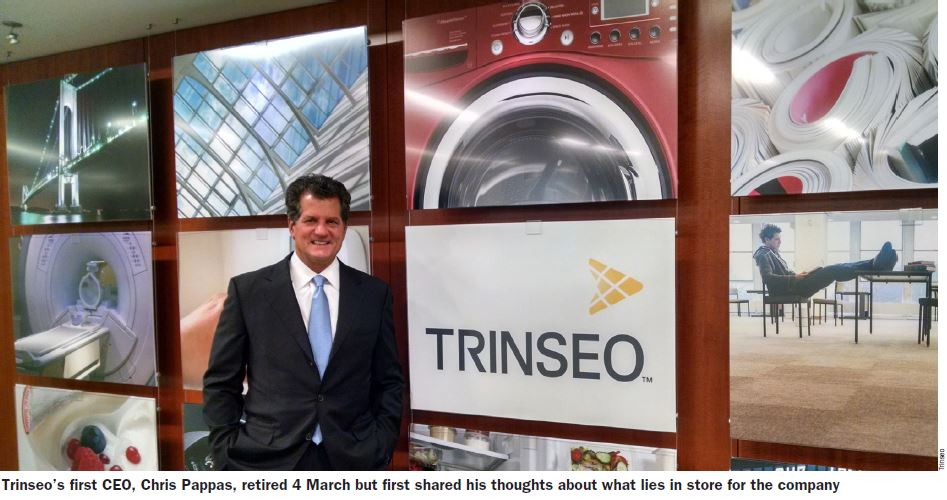 Other parts of Trinseo were less exposed to the whims of supply and demand, such as engineering materials and solution styrene butadiene rubber (S-SBR). The latter is used in high-performance tyres. “We felt these were really good places to grow,” Pappas said.

As profitability rose for the commodity aspects of the company, Trinseo would have the funds to undertake a number of attractive projects. It would invest in its latex technology, developing grades to target applications in adhesives, construction, carpet and paper.

The company would go on to build an acrylonitrile butadiene styrene (ABS) plant in China and a pilot plant in Germany that produces S-SBR. Both recently started operations.

In 2017, Trinseo would make its first and so far only acquisition, buying Italy’s API Applicazioni Plastiche Industriali to add capabilities in soft touch plastics to its portfolio.

During Trinseo’s first years, one of its biggest challenges was building the functions of a business that are often taken for granted. As part of Dow Chemical. Trinseo did not need to handle its own procurement, human resources or finances, Pappas said. Developing those functions was among the challenges in starting a new company.

It even came up with a new name. Styron would become Trinseo in 2015.

A young company also had to hire a lot of new people. Trinseo saw this as an opportunity and brought in people from different companies and backgrounds, Pappas said. It was a good way to introduce new ideas to Trinseo while also filling critical positions.

“We had very good people, we had good technologies, good assets. All of that was really a great starting point,” Pappas said. The company put in place a culture that stressed accountability, open communications, ethics and a strong environmental, health and safety (EH&S) programme.

With the foundation in place, Trinseo would reach other milestones. It issued an initial public offering (IPO), and its stock began trading in 2014 near $20/share. In 2016, Bain Capital would announce the sale of its remaining stake in the company.

At the time of Bain’s announcement, Trinseo’s stock was trading above $50/share. The company’s stock would ultimately break $80/share in September 2018 before falling in the fourth quarter of 2018 to just above $50.

Over the years, the company has paid down its debt and returned money to shareholders, all while funding its growth projects, Pappas said.

Pappas leaves Trinseo with a solid balance sheet. Net debt/EBITDA (earnings before interest, tax, depreciation and amortisation) at the end of 2018 was just 1.3x the midpoint of Trinseo’s forward 2019 guidance of $500m-580m in EBITDA.

“It puts us in a fantastic spot for the future,” he said.

This is where new CEO Frank Bozich comes in. His first day as Trinseo’s CEO was 4 March. Bozich was most recently the CEO of SI Group, a US-based specialty chemicals producer that operates more than 30 plants. During his tenure, Bozich expanded the company’s chemical intermediates and specialty resins businesses. It acquired businesses from Albemarle, and expanded operations in Brazil, China and the US.

“He’s somebody who really understands the nature of growing companies, particularly in the more specialty oriented direction, which is what our strategy is,” Pappas said.

Pappas will continue at Trinseo as a special advisor. He and Bozich will spend the next six to seven weeks travelling to the company’s sites and visiting its partners. Pappas will also remain with the company on the board of directors.

The company’s new phase will be characterised by growth, but it will still maintain its disciplined approach to spending cash, Pappas said.

Trinseo could see a recovery in its key markets in performance plastics and synthetic rubber in 2019 from Q4 2018 levels.

“We’re cautiously optimistic. We gave a broad range in our guidance for 2019 in a very purposeful way to indicate that the year could develop in a rather broad range… So 2019 started OK, but it’s very early in the year,” said Pappas.

“We’ve just gone through Chinese New Year, there are still a lot of global dynamics out there that aren’t settled, and there is still a lot of uncertainty in China about rate of rebound,” he added.

“China itself – and this is separate from the trade dynamic going on – has been in a bit of a slowdown for a while, about six to eight months during 2018,” said Pappas.

As to end markets, the slowdown in China is not relegated to the automotive sector but broad-based in consumer, durable goods and electronics markets, said the former CEO.

Because of these issues, the very nascent recovery in China from the fourth quarter bears watching aside from the US trade issue.

“People like to say it’s trade. I don’t believe it’s just trade. In fact, I know it’s not,” Pappas said.

Along with weakness in China as well as Europe, the automotive end market was a key culprit in disappointing Q4 2018 earnings for many chemical companies.

“I think automotive will continue to be challenging [and] my sense is that it will remain the most challenging in China. I think the European situation will be resolved through the course of a couple quarters,” said Pappas.

Trinseo has about 15% of its sales in the automotive sector through its performance plastics business, and another 12% of sales to the tyre market, noted Pappas.

“We’ve had a very strong automotive environment for the last several years globally so it’s pretty likely that 2019 will be less dynamic than that in aggregate,” he said.

Trinseo will continue its focus on the medical, consumer electronics, automotive and construction markets.

“We’re not looking to make a big shift in markets, because our strategy is sound and we’re going to focus on growing the higher value end of our portfolio, developing better technologies to drive value into those markets,” said Pappas.

On the styrenics market, there is limited capacity on the horizon with “a number of the styrene assets people thought were going to start up in China having been delayed again”.

“So we think that business is going to continue to have reasonable returns. We don’t see any real significant impact of new China styrene capacity until well into 2020 and 2021, and it’s hard to tell whether that will get pushed out further. We’re still pretty constructive on styrene and PS. There’s no PS being built,” said Pappas.

In addition, if new large integrated styrene capacity does come on in China, it’s unclear whether some of the smaller, older non-integrated plants would continue to operate, he added.

For high-performance tyres, into which Trinseo sells its S-SBR, the growth rate is slowing from about 10-12%/year up through 2018, to a “still healthy” 6-7%/year going forward, noted Pappas.

“We think we’ve got great technology, we’ve been able to deliver a lot of new products to the market, and we have a new pilot plant that’s developing better products,” said Pappas.

In February 2018, Trinseo opened a new S-SBR pilot plant in Schkopau, Germany, along with completing a 50,000 tonne/year expansion in capacity at the site.

“So we have a nice growth market, and good strong technology and capability to pursue it. That’s why we invested in a new facility that started up in Germany last year in S-SBR. We’re in the process of qualifying that facility into the [tyre] market,” he added.