HOUSTON (ICIS)–The queue of vessels waiting to get in and out of the Houston Ship Channel continued to grow on Wednesday because of restrictions stemming from the Intercontinental Terminal Co (ITC) fire last week. 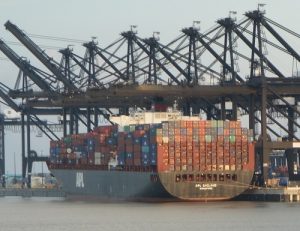 A line of 50 ships awaited inbound passage on the channel, and 26 ships waited to leave, according to the US Coast Guard. A trader said at mid-day that the inbound line of ships had grown to 56 vessels.

Some movement on the waterway and Port Houston remains open, though transits through the spill area around ITC are limited to one-way and during the day only, according to authorities.

Enterprise Products Partners, just west of ITC, said in a statement that its terminal remains operational but broader access to the channel remains the issue.

“Our ships are starting to move inbound and outbound,” Enterprise said.

The fire at the Deer Park ITC terminal started March 17, damaging 11 storage tanks in a blaze that burned for days.

There were no injuries in the fire, but elevated benzene readings around the plant forced shelter-in-place orders, school closures and toxic run-off from the site that closed a 7-mile (11-km) stretch of the ship channel for three days before it was partially reopened on Sunday.

Several facilities are already in serious containment situations, and more than one is approaching a shut-down situation, according to authorities.

Total Petrochemicals and Refining declared force majeure this week on all polypropylene (PP) from its La Porte plant, citing the ITC fire and poor air quality around the plant as the reason.

Another gasoline components maker agreed that the jam on the waterway could quickly start to shut plants down.

“I can say that if this persists much longer there will be effects on production for a lot people associated with ITC,” the source said.

Brokers and traders said that has already begun to happen, with crude inbound and outbound shipments both down sharply.

“Stuff is delayed left and right on the ship channel,” said an ethanol trader. “It has backed up vessels for a few days but the backlog is building.”

A trader said there are 36 vessels in the containment area around ITC that must be decontaminated before they leave.

Decontaminating a ship takes two hours, the trader said, which means only five vessels can be decontaminated each day because vessel movement is prohibited at night. The trader said that means it will take at least a week to decontaminate all the ships waiting to get out of the containment area near ITC.

That could mean that crude tankers with needed oil supplies for refiners and petrochemical plants will not be able to reach the ITC or Vopak terminals until next week.