US tariff escalation could have greater impact on chemicals and plastics

US President Donald Trump’s threat to raise tariffs on the latest batch of $200bn in Chinese imports from 10% to 25% on 10 May would hit a far broader range of chemicals and plastics than in prior rounds, magnifying the impact on the US, Chinese and global economies.

The first US round of 25% tariffs on $34bn in Chinese imports implemented in July 2018 and China’s retaliatory tariffs did not include chemicals. However, US and China tariffs in round 2 on August 2018 and round 3 on September 2018 targeted chemicals directly.

The second round involved 25% tariffs on $16bn in US and Chinese imports, directly impacting $2.0bn of US chemicals and finished plastics exports to China, and $2.2bn of China’s exports to the US.

However, the third round of tariffs on both sides, which targeted $200bn in Chinese products and $60bn in US goods ratcheted up the impact on chemicals and finished plastics to $8.8bn on US exports, and $13.2bn on Chinese exports.

A tariff of 10% can be considered workable, but 25% is prohibitive. Take for example, US high density polyethylene (HDPE) and linear low density PE (LLDPE) exports to China that are under 25% tariffs in the second round. 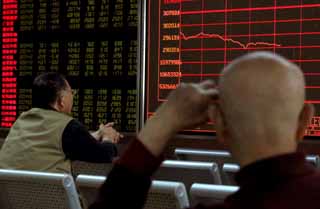 Despite the fact that the US is adding big chunks of such PE capacity, and primarily for export, its exports to China – the number 1 PE deficit market – have plummeted. From October 2018 through February 2019,  average monthly US exports of HDPE to China were down 58% to 10,611 tonnes versus the year-ago  period, according to the ICIS Supply and Demand Database. For LLDPE, they were off 62% to  9,218 tonnes.

The US is instead stuffing channels in southeast Asia and Latin America, driving down prices. The US now sends far more LLDPE to Vietnam than to China – a stunning development.

So it is worth revisiting which bulk commodity chemicals would be impacted if the US ratchets up tariffs from 10% to 25% on this third round of $200bn in Chinese imports, and if China in turn retaliates with higher tariffs on its third round.

For China, the bulk commodity chemicals most impacted in this escalation from a volume standpoint based on 2018 trade flows would be caustic soda, titanium dioxide (TiO2), acrylic acid, styrene butadiene rubber (SBR) and acetic acid.And anticipating a retaliatory response from China on its  third round of tariffs on US imports, where current tariffs stand at 5-10%, the US bulk chemicals and polymers most impacted would be ethylene dichloride (EDC), polypropylene (PP), TiO2, n-butanol (NBA) butadiene (BD) and propylene glycol (PG).

Solely in bulk commodity chemicals and polymers, US exports to China were more heavily impacted in round two. 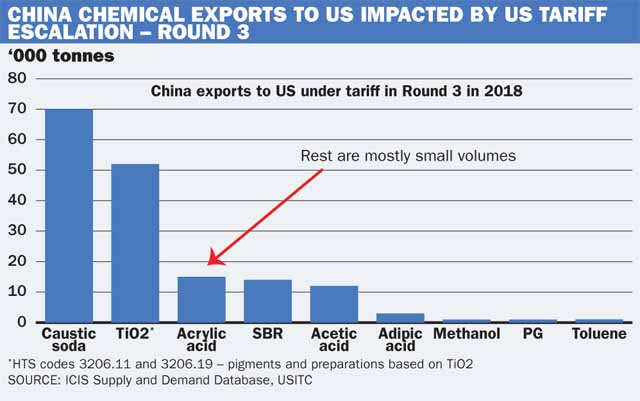 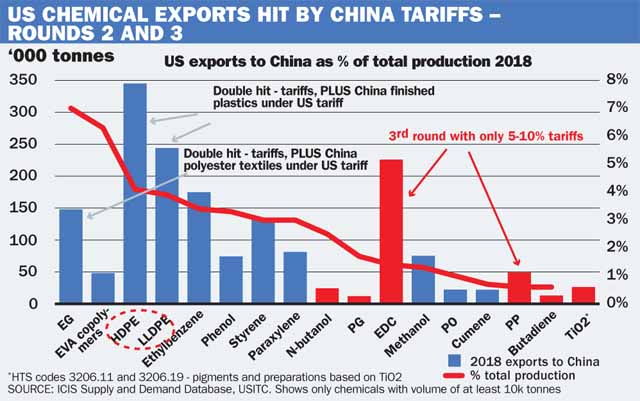 ACC SEES RISKS AS TOO HIGH

The latest escalation in the US-China trade war is a clear threat to the US chemical sector. The risks of higher tariffs are “simply too high”, said the American Chemistry Council (ACC).

“China supplies the United States with several chemicals which are not available anywhere else and which are critical inputs to US manufacturing. China is also the third-largest export market for US chemicals manufacturers,” pointed out Cal Dooley, president and CEO of the ACC.

The US and China tariffs are already “disrupting supply chains, cutting off markets and eroding US chemical manufacturing competitiveness”, he added.

In 2018, US chemical imports from China actually rose a robust 22.7% as companies stocked up inventories ahead of the tariffs, but US chemical exports to China gained only 2.7%, leading to a tripling of the US trade deficit in chemicals with China to $4.0bn, according to the ACC.

“The ACC and its members strongly urge President Trump to remain focused on sensible solutions with China this week and forgo the imposition of higher tariffs.”

US chemical equity prices took another big hit on Tuesday following Monday’s declines as investors started to weigh in the risks of no US-China trade deal, with notable declines for Chemours (-8.0%), DowDuPont (-4.4%), LyondellBasell (-2.3%), Westlake Chemical (-2.2%) and Huntsman (-2.0%).

However, in a positive scenario in which a trade deal is struck, chemical earnings and stock prices could surge, noted Charles Neivert, analyst at Cowen, in a 6 May report. 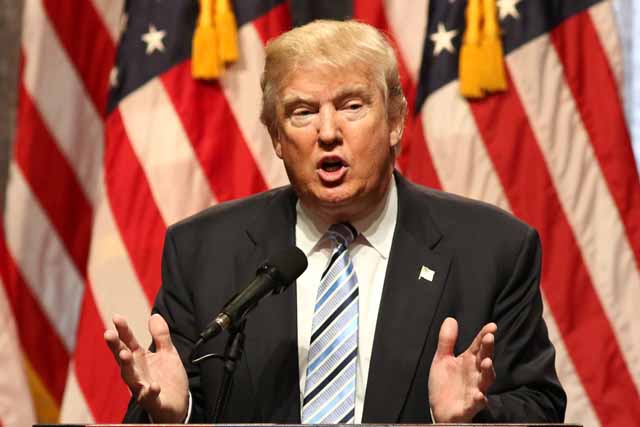 “We believe the Street is  vastly underestimating the upside potential of a trade resolution on chemical company earnings, especially for Dow, LyondellBasell, Westlake and Olin,” said Neivert.

Export prices for US producers are far lower than they would have been without the trade issues. Plus, the export tonnage and the percentage of export sales has been rising, so this discounted product has had a greater negative impact on earnings, the analyst said.

A trade resolution should  not only lead to higher export prices, which would apply to the larger export volumes,  but also support domestic prices, he added.

“Based on our channel checks, the gap between the PE price to a mid-to-large size distributor versus an export seller is 15 cents/lb or more [versus a typical gap of 5-6 cents/lb],” said Neivert.

“A trade resolution could bring the gap back to near normal if product goes to China instead of being forced into other markets. The margin benefit to a producer selling 25% of its output to export could add 2-3 cents/lb to overall margin without having to initiate a price hike,” he added. ■