NEW YORK (ICIS)–A massive pile-up in inventories at key US big-box retailers may be a warning sign for chemicals demand, which has partly been propped up by the overbooking of orders.

The Q1 downside earnings shocker at No 1 US retailer Walmart on 17 May was followed up by much of the same at Target on 18 May. The main culprit? A huge inventory build-up, as the companies misjudged consumer demand for certain products. Inflation was also a factor in the higher inventory numbers.

Logistics tangles didn’t help either, as some products arrived too early and others too late.

The magnitude of the retail earnings misses and huge inventory builds were a key factor in the collapse of the US stock market on 18 May. Chemical equities were also hit hard but suffered less than the overall market.

For Walmart, inventories ballooned to 43% of total Q1 sales versus 34% in the year-ago period. Walmart saw US consumer spending shifting away from discretionary items such as apparel, patio furniture and landscaping supplies and more towards food and consumables.

“Most of the increased inventory and related costs were related to buying over the past several quarters with a keen focus on in-stock, and now we’re in a short period of rightsizing it,” said Walmart chief financial officer Brett Biggs on the company’s Q1 earnings conference call. 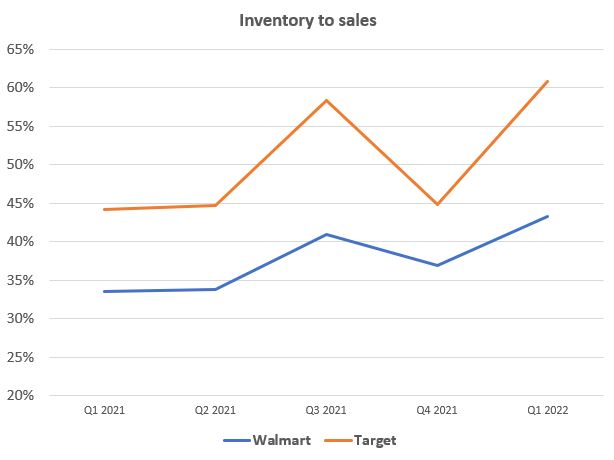 INVENTORY UNWIND ON ITS WAY
The period of “aggressive inventory buys” through the past several quarters is now over, and a big inventory unwind is on its way.

Target’s inventories stood at 61% of Q1 sales versus 44% from a year ago. It underestimated the magnitude of the consumer shift away from certain goods and towards services, leading to burgeoning inventories in “bulky categories” such as kitchen appliances, TVs and outdoor furniture.

These bulkier items tend to have a high chemicals component. Home and kitchen appliances use plastics such as polypropylene (PP), polystyrene (PS) and acrylonitrile butadiene styrene (ABS), which have largely replaced metals, ceramics and glass for electrical appliances such as food blenders, according to website Kitchen Buds.

TVs likewise use ABS and high impact PS (HIPS), along with polycarbonate (PC) and polymethyl methacrylate (PMMA). Outdoor furniture such as tables, chairs, benches and table lamps contain a good amount of high density polyethylene (HDPE) as well as PMMA.

Target sees consumer spending instead shifting to categories such as food and beverage, beauty and personal care, and household essentials.

“Our team is focused on doing everything necessary to ensure we enter the fall season with an appropriate level of inventory by category,” said Michael Fiddelke, chief financial officer of Target.

It will likely take several quarters for the big inventory builds to normalise (Walmart also estimates a couple of quarters), and impairments are also probable, especially for seasonal items.

GOODS INFLATION MAY EASE
On the bright side, bloated inventories will likely lead to price markdowns as retailers look to move excess stock. Walmart estimates it took a $100m hit to gross profit in Q1 from higher-than-normal markdowns. Management would not quantify potential gross margin impact in the coming quarters. Target likewise marked down items to move inventory in Q1.

CONSUMER SPENDING STILL HEALTHY
On a macro level, US retail sales overall rose 0.9% in April from March and was up 8.2% year on year – not surprising given the level of inflation.

“However, the inventory figures for those companies (Walmart, Target) are worrisome, and could result in destocking,” he added.

The US consumer is clearly still spending, and the year-on-year gains in overall sales for both Walmart and Target bear that out. But what is just as clear is that retailers severely overestimated the magnitude of consumer demand for goods – the so-called bulkier goods in particular.

It’s shocking to see some of the largest US big box retailers caught so flat-footed on inventory management when you’d expect this to be a core capability.

Perhaps it would be slightly less shocking if one paid more attention to ecommerce retailer Amazon’s Q1 earnings results on 28 April where it saw inventories rise 7% from Q4, and 47% year on year to $35.0bn.

Shares of Walmart fell 11.4% when it announced earnings on 17 May, and declined a further 6.8% on 18 May. Target’s stock plunged almost 25% on its earnings announcement on 18 May, underscoring the market’s surprise.

CHEMICALS TO FEEL DESTOCKING IMPACT
US chemicals companies mostly reported solid Q1 earnings, with essentially no signs of demand destruction even in the face of continuing price hikes.

This could be due to customers overbooking orders and continuing to build inventory given the dismal state of the supply chain.

Panellists at the 12th ICIS World Surfactants Conference on 10 May indicated that the trend of buyers overbooking to ensure sufficient supply is unlikely to end anytime soon as logistics constraints persist.

However, the burgeoning inventories at big box retailers may be the canary in the coal mine. As retailers wind down inventories in the quarters ahead, this impact should start to be felt down the supply chain, all the way down to chemicals and plastics.