LONDON (ICIS)–Two years on from the Grenfell Tower disaster that killed 72 as inflammable cladding engulfed the central London building, sources in the UK’s polyurethane (PU) value chain said demand has taken a hit after the fire. 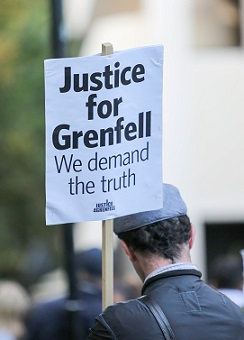 The decrease in demand for PU has also been accompanied by a marked slowdown in the UK’s  construction sector, where activity has been slowing down for months.

Companies who provided building materials used in Grenfell Tower’s refurbishment face legal action following the fire at the block, according to a lawsuit filed in Philadelphia, US, on 11 June.

The wrongful death lawsuit, being carried out by relatives of dead victims and survivors, states that the fire started in a flat’s refrigerator was able to spread by the insulation and exterior cladding.

Celotex’s branded insulation material RS5000 insulation has a polyisocyanurate foam core (PIR), which was compliant with UK fire standards prior to the blaze.

Both companies removed these products for use in the construction of high rises in the wake of the London fire in June 2017.

Those materials “turned the Grenfell Tower into a cylinder of fire,” said Jeffrey Goodman, an attorney for one of two law firms that brought the case, in Philadelphia last week, as reported by news agency Reuters.

“[The two materials] transformed a controllable blaze into a deadly inferno. The cladding and the insulation were the fuel that allowed the fire to ravage Grenfell Tower and kill 72 innocent victims.”

DEMAND TAKES A HIT
While the European PE market has not been affected by the incident, the polyurethane (PU) value chain in Europe has felt some repercussions following the fire.

Prices for crude methylene diphenyl diisocyanate (MDI), which is used to make PU and PIR foams, have declined, with one buyer attributing this, in part, to a loss of demand occurred after Grenfell.

“The first half of last year was appalling [for demand]. Because of what happened the year before, prices were pushed up so hard and there were so many shortages and problems that they [producers] lost the market,” the buyer said.

“We are actually still down [in overall demand], the majority [of customers] have come back, but some are still not back and I think they won’t come back … Probably a bit of Grenfell [Tower fire] as well [relates to lower demand].”

Feedback from another European isocyanates source suggests that any impact has been felt on a more regional level.

“Only in the UK we see some people worrying. I would estimate it has had a local impact of maybe 5-10% of demand which is lower than usual … And 10% it is quite significant,” said one isocyanate producer in April.

“For the rest of Europe, it has a bit of a less of an impact, people still see polyurethanes [used].”

Celotex issued a statement on 11 June it would provide any relevant information to the ongoing public enquiry set up in wake of the event.

“We are continuing to cooperate fully with the Public Inquiry, which will be considering in Phase 2, a large number of complex and inter-related issues concerning the refurbishment of Grenfell Tower, including the design and installation of the rainscreen cladding system, of which insulation made by Celotex formed one element,” it said

Saint-Gobain and had not responded to a request for comment at the time of publishing.

In July 2017, the UK government commissioned Dame Judith Hackitt to undertake an independent review of building regulations and fire safety in England, but legislation is yet to change.