LONDON (ICIS)–Romanian and foreign market participants have called for an international investigation into the independence of national energy regulator ANRE amid concerns of political interference that may have led to significant market distortions.

Under EU rules, which Romania as a member state has committed to uphold, the regulator is expected to remain independent of political or private sector influence.

However, stakeholders active in the market and regionally have urged the European Commission to examine a catalogue of alleged instances that call into question the neutrality of the Romanian energy watchdog.

– Reported meetings between politicians, government officials and ANRE’s senior members outside working hours with a view to influence the regulation of electricity and gas prices.

– Allegations that a controversial emergency ordinance requesting the capping of gas and electricity prices, which led to significant market distortions this year, may have been written by at least one member of the regulator at the instructions of a senior government official.

– Allegations that the regulator may have set suppliers’ rate of return with a political goal in mind, rather than to create a fair market environment.

EU sources told ICIS that the allegations could lead to infringement procedures by the European Commission against Romania if the commission finds that the relevant independence requirements for the regulatory authority have not been followed fully.

Under article 6(3) of regulation 942/2019, and article 57(7) of 944/2019, by 5 July 2022 and every four years thereafter, the commission will have to submit a report to the European Parliament and the Council of the EU on the independence of regulatory authorities in member states. This means the commission will be obliged to investigate the independence of watchdogs across the union one way or another.

The calls for an international investigation against the Romanian regulator come amid recent attempts by parliament to pass amendments to a key piece of legislation that may effectively exonerate senior ANRE members of any allegations of negligence that may have led to significant market distortions.

The proposed amendments also seek to increase the powers of the regulator in managing tens of millions of euros as a result of a 2% tax imposed by the government on energy companies’ gross margins.

Several sources interviewed by ICIS pointed out that ANRE senior members had regular meetings with high-profile MPs including Iulian Iancu, the chair of the commission for industries and services in the Chamber of Deputies of the Romanian parliament.

Sources say that although members of the regulatory committee and MPs are entitled to discuss market developments, they stress that some of the meetings were conducted at the ANRE Bucharest headquarters outside working hours or at weekends. The purpose of these meetings was to exert political influence on ANRE members, sources said.

In a statement to ICIS, Iancu denied the claims, insisting that, as the author of a report which approved the legal tools that led to the organisation of the regulator, he had fought to uphold the independence of the regulator.

“Considering these arguments, it could not have been me who has breached the independence of the regulator,” he said.

Iancu also insisted that “there had never been a weekend when he met any of the ANRE presidents at the regulator’s headquarters or elsewhere”.

In a statement to ICIS, ANRE said meetings and discussions between members of ANRE and the Romanian parliament would be conducted within legal and institutional frameworks.

“The board made up of seven members does not solicit or accept instructions from any public or private entities towards fulfilling their responsibilities […] All board decisions are preceded by public consultations […]at the proposal of professional or consumer organisations.”

Sources have also alleged that an explanatory note to articles related to energy markets and included in ordinance 114/2018, which led to market distortions and turned Romania into one of Europe’s most expensive gas and electricity markets this year, may have been drafted by at least one senior member of ANRE.

ICIS has seen a Word document of the draft note, which does indeed show Claudiu Dumbraveanu, the regulator’s general director of the electricity and natural gas department, as its author.

A source close to the regulator said that while the EO114/2018 was being drafted, both Dumitru Chirita, president of ANRE, and Dumbraveanu were regularly invited to the government to meet Florin Ciocanelea, the prime minister’s councillor, to receive instructions related to the drafting and implementation of the ordinance.

The source said that such an action was contrary to the EU’s directives 72/2009 and 73/2009 for electricity and natural gas which state:

(ii) do not seek or take direct instructions from any government or other public or private entity when carrying out the regulatory tasks.”

In a statement to ICIS, Florin Ciocanelea, who has now left the government on health grounds, said he had attended several meetings with senior ANRE members for “analysis and information purposes” regarding the evolution of energy markets in Romania and regionally.

“Under no circumstance, did I influence or issue any instructions to senior ANRE members with regards to the drafting or implementation of EO114/2018,” he said.

The ordinance, which covers other economic sectors including banking, was passed by the PSD-led government in December 2018 .It stipulated, among other things, the regulation of gas tariffs to end consumers, and introduced both an import requirement and a 2% tax on companies’ annual turnover. It was subsequently amended throughout 2019 so the regulated gas price would apply only to households, rather than all consumers and the 2% tax would be imposed on trading companies’ and suppliers’ gross margins rather than annual turnover.

The ordinance led to distortions in the market because producers were tasked with selling domestic gas and electricity at regulated tariffs to households. Gas volumes were allocated by the regulator but were not enough to plug demand. This meant that suppliers had to ramp up imports , turning Romania into a premium market. In November Romanian import prices were expected to be on average €5.00/MWh more expensive than on the Austrian VTP. 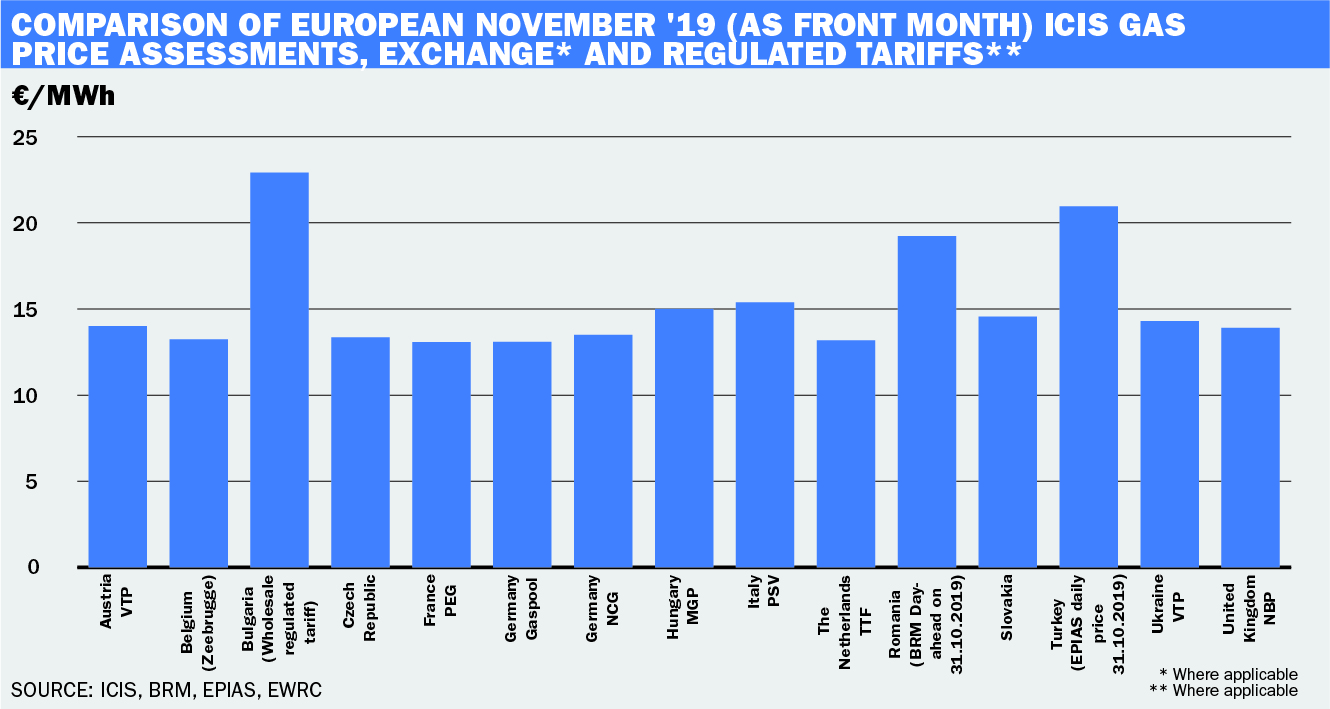 ANRE did not specifically address ICIS’ question regarding the authorship of the emergency ordinance draft related to energy markets.

Sources said that shortly after the publication of emergency ordinance 114/2018, the regulator was tasked with setting regulated tariffs for the sale of locally produced electricity to households.

It is unclear how these tariffs were calculated and based on what methodology.

However, a source active in the market said the regulator had the option of rejecting requests by the government to regulate the tariffs, calling on the government to abide by EU free market rules to avert any infringement proceedings for non-compliance brought by the commission against Romania. The regulator however chose to implement the ordinance, sources said.

Eventually, the commission triggered an infringement procedure against Romania this year. It relates to the price caps and the obligation imposed on producers to prioritise households when selling volumes.

The regulator subsequently came up with a proposal to phase out the obligations by spring 2021, only one year earlier than 2022 when the price cap originally introduced by the EO 114/2018 is due to be phased out.

In the statement to ICIS, ANRE said the regulatory committee had approved the methodology for setting prices for electricity producers as part of regulated contracts between producers and suppliers of last resort. It said ANRE’s order 10/2019, which approves this methodology, was being contested in court by market participants.

ANRE admitted that it was obliged to implement primary legislation but added that it had warned the government that the articles of EO114/2018 should be compliant with EU free market regulations. But it failed to do so.

Another criticism levelled by market participants at the regulator ANRE is that it had issued decision 474/2019 where it sought to force producers to sell their output to a few consumers . Failure to abide by the decision, would have entailed penalties amounting to 10% of their gross margin.

The methodology for the allocation of domestically produced gas to certain consumers was opaque and arbitrary, sources told ICIS.

The decision was eventually scrapped in the first half of this year, but sources point out that when drafting it, the regulator stipulated that it would be issued based on article 8 of emergency ordinance 33/2007.

However, article 8 of EO33/2007 effectively promotes the establishment of a free electricity and gas market […] for the benefit of all EU consumers and suppliers.

“Article 8 of EO33/2007 did not establish the legal background to issue decision 474/2019. There is no connection between the two, raising questions whether the regulator may have acted in bad faith when issuing decision 474/2019,” a market source said.

ANRE did not address a question from ICIS regarding the compatibility of article 8 of EO33/2007 and its decision 474/2019.

Market sources have also raised questions about the methodology of establishing the rate of return for suppliers.

A source said ANRE had calculated the rate based on a 3.66% interbank interest rate (ROBOR) to which it added a further 2 percentage points. This meant that distributors’ rate amounted to 5.66% annually. Regulators typically take this rate into calculation when setting annual tariffs for distributors.

However, the source said the rate should take into consideration other factors such as capital and operating expenditure as well as costs linked to theft and loss.

The rate was eventually abolished in March 2019 and set through a governmental emergency ordinance at 6.9% from April 2019. By establishing a lower rate, the regulator could calculate cheaper tariffs, the source said.

“The rate [set by ANRE] discouraged companies from entering the market,” he said.

The parliament has recently sought to pass a series of amendments to exonerate senior members of ANRE of any allegations of negligence that may have led to significant market distortions.

It has sought to do this by removing two articles of emergency ordinance 33/2007 which would have stripped members of their jobs if negligence had been proven.

The proposed amendments, which were rejected and returned for review by parliament by Romanian president Klaus Iohannis, also seek to increase the powers of the regulator in managing millions of euros which it expects to rake in as a result of a 2% tax imposed by the government on energy companies’ gross margins. It is understood that the 2% tax revenue is used to fund ANRE’s activities.

It is not known how much money the regulator may be collecting as a result of the tax imposed through EO114/2018, but market sources estimate it at anything between €100-€200m per year. The ANRE’s annual budget had been typically estimated at around €18m.

In a statement to ICIS, the European Commission’s spokesperson said the commission was in close contact with the Romanian authorities on the measures introduced by EO114/2018 to remove potential conflicts with EU law, but declined to comment on the behaviour of ANRE.

“Notwithstanding national administrative rules, it is the sole responsibility of the national regulatory authority (NRA) to determine how it operates and is managed. The NRA must also be able to take autonomous decisions, independently from any political, public or private body. The assessment of compliance with the independence criteria is done on a case-by-case basis, as part of the commission’s role in monitoring the correct implementation of EU law,” the commission said.