HOUSTON (ICIS)–Freight costs remain volatile as vessels are now transporting goods half full impacted by the coronavirus pandemic that has created logistics nightmares.

As Chinese petrochemical participants partially return to the market scene trying to reduce inventory levels, other parts of the world such as the Americas are seeing increasing numbers of infection posing a big challenge to the shipping industry.

The decline is not only due to a reduction in the PET prices from China, but also to a reduction in shipping prices as the industry tries to increase product flow at the international level. Freights from China to Latin America are estimated to cost about $45/tonne now, roughly half the cost a few weeks ago.

Despite the sharp decline in resin prices, there are no takers. With most Latin American countries borders closed, movie theaters, restaurants, bars, school, etc. also closed and strict curfews in place indefinitely in South America, nobody is tempted to purchase product coming from China, the epicenter of the decease.

Conversely, no offers from Latin American sellers have emerged as participants are worried about the product being stopped somewhere on its way to the delivery point or stuck at the port.

Many are concerned that if truck drivers get sick, the product will not be delivered to the storage facility and instead, it will get stuck at the port, incurring higher costs, particularly at a critical time in which local currencies continue to devalue against the US dollar.

“The recent devaluation of the peso is of over 20% against the US dollar, from about 3,400 to 4,100,” explained a Colombian supplier. “The unpredictability in the PET market is enormous,” the source added.

Many other South American PET sources have cited “the devaluation of almost all currencies in Latin America as well as the supply system” as a major problem right now.

Others are concerned about their jobs as in some municipalities resort to quarantine and plant employees do not have the option to work from their homes.

So far, despite the instability seen upstream in crude oil and the stock markets, Latin American PET prices seem to be holding flat even in countries where extremely cheap Chinese offers have emerged because buyers will not place orders for Asian origin resin. 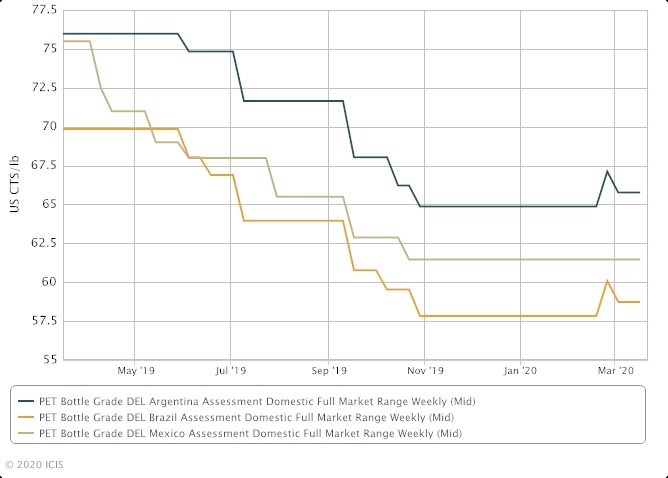 PET can be compounded with glass fibre for the production of engineering plastics.

DAK Americas, Indorama, Nan Ya Plastics Corporation and Far Eastern New Century (FENC) are PET producers in the US.