HOUSTON (ICIS)–US isopropanol (IPA) prices surged this week on heavy demand for hand sanitizer during the coronavirus (Covid-19) crisis, and there are no quick fixes for either the strong demand or the shortages of product.

While European prices had risen to even higher numbers in the past month, US increases had been modest.

IPA prices DEL (delivered) to the US Gulf are assessed at 64-90 cents/lb. 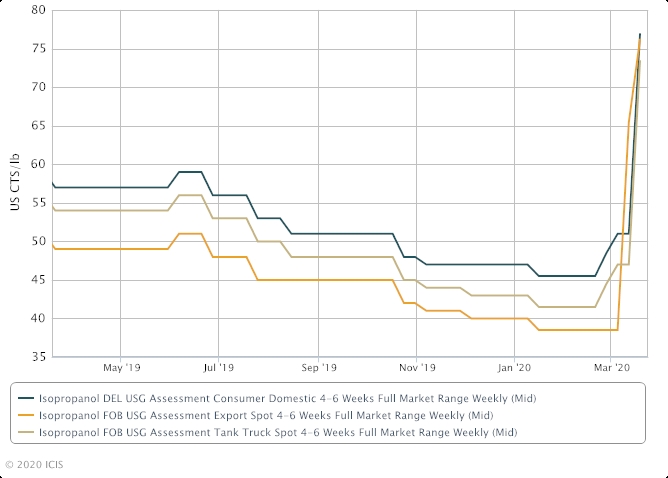 DOMESTIC IPA MARKETS
Until this week, prices in the US were increasing at much smaller rates than in Europe, generally in the range of 5 cents/lb or less. However, this week was a tipping point for the domestic market, as the US response to the coronavirus was heightened.

Isopropyl alcohol is used in many hand sanitizers, which are in high demand among consumers because of their ability to kill germs.

Hand sanitizers were among the first products to sell out at grocery stores and pharmacies, but demand has increased since then.

It was believed that the US was not seeing the level of IPA price increases as in Europe since it had more ethanol.  However, due to the increase in US exports to Europe as well as the rapid rise domestic demand, supply of IPA was nevertheless overwhelmed.

One market participant said many producers were on sales allocations, but this could not be confirmed.

This week, prices for individual deals were heard for up to triple these numbers in Europe on imported IPA. However, these are not yet considered representative for the market.

According to a market source, prices of exports to Asia in the past several days doubled, while another market participant said that Latin American demand began to heavily increase this week, but that there was almost no supply to provide to buyers there.

IPA is a solvent principally used in industrial and consumer products including cosmetics and personal-care products, paints and resins, pharmaceuticals, food, inks and adhesives. It is also used in de-icers in the winter.