Europe on course for sharp reduction in power demand

• Downside for UK and German prices in lockdown scenario

LONDON (ICIS)–Power sector demand across key European countries is set for a major slump over the coming weeks as countries scale-up their efforts to tackle the spread of the coronavirus.

Demand in Italy, which has been hit the hardest by the outbreak, has dropped 10% compared to its five-year average for March during the second week of its nationwide lockdown.

As measures to tackle the spread of the virus intensifies across other European countries, a similar drop in demand can be expected, although changes are unlikely to be uniform.

France has been in full lockdown from 17 March. Average demand since the lockdown has dropped 22% compared to March’s average level.

Germany and the UK are also expected to announce similar measures in the coming days.

According to data from transmission system operator Terna, the average demand between 16 and 18 March was 10% lower than the average in March across the previous five years. In comparison, demand dropped 3% during the first week since the lockdown between 9 and 15 March compared with the 2015-2019 average.

Meanwhile, temperatures in Milan over March have averaged 0.5°C below the seasonal average. Below average temperatures would typically raise demand, suggesting the drop in demand is related to the coronavirus rather than being temperature-driven.

The example of Italy indicates that it may take several days following quarantine measures to see the impact of industry closures on power generation demand.

The findings also indicate that demand drops more relative to the five-year average the longer the country has spent in quarantine.

This may mean that the fall in demand has not yet reached its trough and may be exacerbated in the third and fourth weeks of lockdown, signalling further losses on the near-curve.

The areas in Italy most hit by the virus, namely in the central and northern regions where the quarantine was first initiated and where some parts were locked down before 9 March, have seen up to 15% drop in electricity demand in week 12.

Other less-affected regions have seen a much smaller demand slip. This indicates that the 10% country-wide Italian demand drop may be the start of a further decline once all regions have spent longer in quarantine. 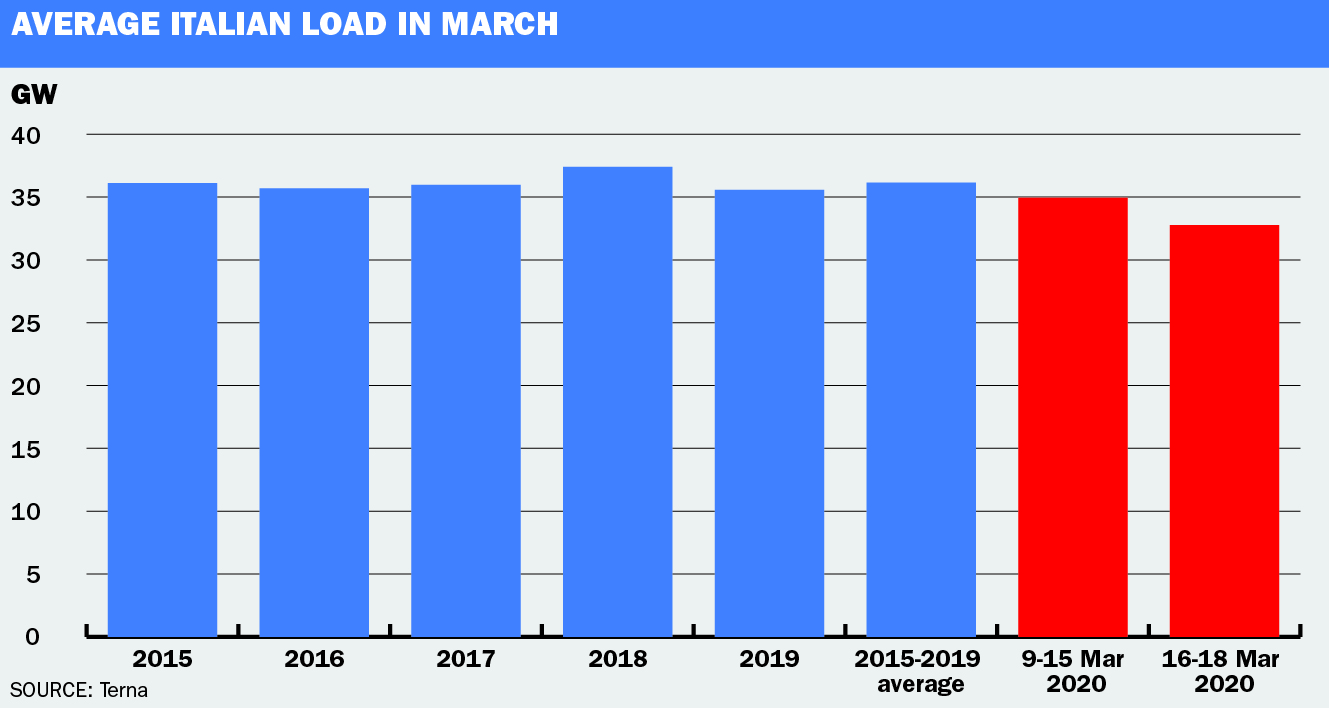 Over the course of the coronavirus outbreak, what has happened in Italy has often set a precedent for what has followed other European countries, often one or two weeks later.

Countries to also implement nationwide lockdowns have now included the Netherlands, Spain and France, with Germany and the UK likely to follow.

Demand in Germany in March is in line with the five-year average while demand in the UK has been on a gradual decline over the past week as more businesses have been forced to close.

In fact, average UK daily demand in March to date has dropped 7% compared with the five-year average. During this period temperatures in the UK have actually been around 2°C below seasonal, indicating demand could fall further if temperatures rise to or above seasonal averages.

Demand profiles have also shifted as workers shift to working from home, with schools also expected to be closed from 20 March onwards.

While it is difficult to put a number on the likely price impact of future government measures, European power traders have scrambled to sell second quarter power contracts as the situation in Italy has intensified and spread to France and other nations.

The anticipated drop in demand has yet to be fully realised on the UK near curve, however. Since the start of March, the April ’20 has shed 8%, compared with the Italian front-month which has lost 23% in the same period.

In the event of a nationwide lockdown in Germany and the UK, prices would likely fall further. The data points that come out of the Italian demand fall will enable participants to more easily assess the likely demand slump in other countries.