LONDON (ICIS)–European power demand will continue to drop as governments escalate measures to stem the spread of the coronavirus.

Electricity consumption in Italy and France fell 16% below expectations over the past seven days, according to an ICIS model that controls for the impact of temperatures.

Three other major power markets studied by ICIS – Germany, Spain and the UK – have seen smaller drops, although all are trending down.

Italian power demand had started to stabilise around 14% below the temperature-driven expectation prior to a shutdown on 21 March of all non-essential business activity.

Electricity demand is dropping as factories, businesses and public buildings close and more people are confined to their homes.

The virus should not affect the supply of gas or power.

French power prices briefly spiked when several EDF nuclear plant employees tested positive, but the risk has been priced out of the market as significant capacity closures began to look unlikely.

Power traders are attempting to forecast how much demand will drop to establish the new cheaper marginal plant that will set the power price.

Demand in Europe’s five largest countries by population has dropped since each surpassed 300 confirmed cases.

Fluctuations in temperature, as well as the tendency for demand to drop over the weekend and on public holidays, makes the exact impact difficult to measure with precision.

ICIS used multiple regression to find the closest statistical fit between daily power demand in each of the five countries in March between 2015-2019 with the temperature and the day of the week over the period.

The models were highly statistically significant, explaining 67% of the variation in power demand in the UK and 80-86% in the other countries.

A 1°C drop in temperatures can lead to a rise in power demand of anything between 279MW in Spain and 1.6GW in France, according to the model.

Demand drops by roughly 4GW on weekends or public holidays in Spain and the UK, but by 7GW in France, 8.5GW in Italy and 11.5GW in Germany.

To measure the drop in demand caused by restrictions and the coronavirus, ICIS added data for each country after it passed 300 confirmed cases into the model, comparing results to actual recorded power demand over rolling seven-day periods.

Power demand was actually slightly higher than expected in three of the five countries at first, possibly due to more industrial than originally forecast.

The extremely low UK figure may be due to slower commercial activity as companies adjusted operations in light of the UK exit from the EU this year.

Demand dropped first in Italy after it imposed a national lockdown on 9 March.

In recent days, actual consumption has started to increasingly underperform the modelled expectation in each country at a relatively uniform rate.

The stringency of national restrictions to combat the coronavirus and the particular power sectoral breakdown will determine how steeply demand falls in each country.

France’s high share of residential electric heating might have been expected to support power demand, but French consumption has fallen the most sharply among the five countries studied. 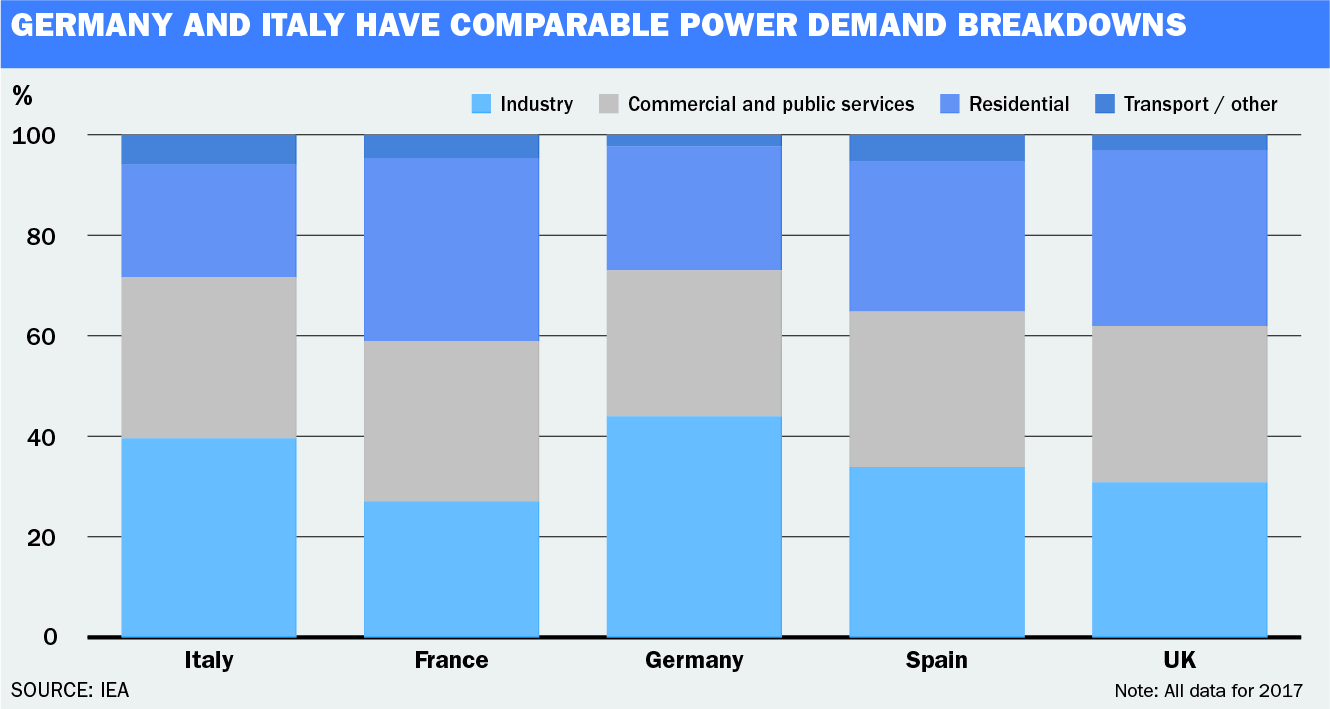 Equally, the relationship between power demand and price is not 1:1, and also depends on the marginal cost breakdown of each country’s power plant fleet.

An ICIS analyst study found that a roughly 10% dip in European power demand through June followed by a steady recovery over the rest of 2020 would drive down prices by 9% on average compared to the base case.

This study found that power demand has already fallen by more than this across Europe’s largest markets.