However, price downward pressure persists as deals are being concluded at double-digit discounts for early June deliveries amid ongoing supply glut and limited demand. 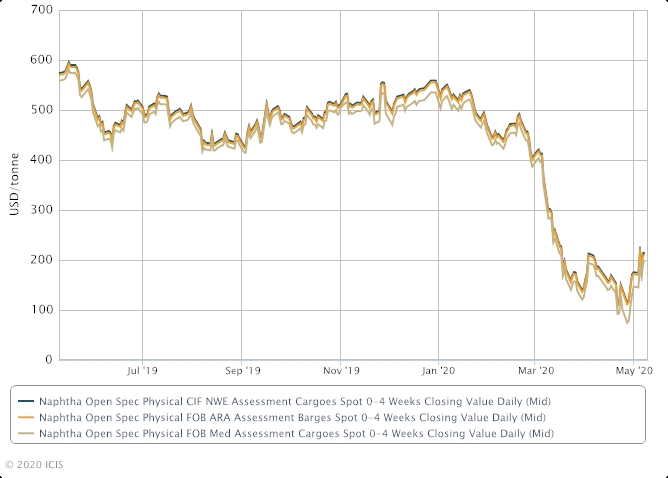 –
On a weekly average basis, ICIS data shows prices up 40% compared with the week prior amid falling refinery output and improved consumption rates at crackers. 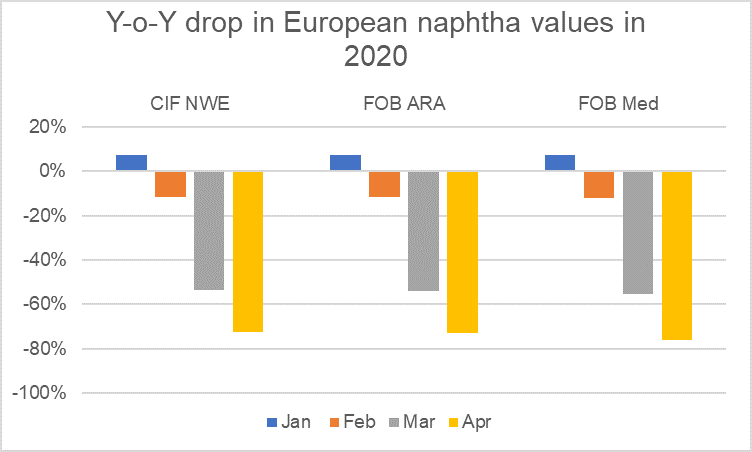 As such, naphtha stocks rebounded to the highest since August 2019, prompted by low end-user demand and a steep contango in the forward curve.

GLUT PERSISTS
Even though sentiment has marginally improved as lockdown restrictions are starting to be eased, the lack of demand across Europe and the lack of buying interest from gasoline blenders have done little to improve the supply glut.

According to a market participant, Asian demand remained steady as steam cracker operators were keen to capitalise on cheap feedstock prices and favourable margins for propylene and polymers.

Naphtha is also in demand from Chinese naphtha-fed steam crackers as they step up operating rates to catch up on lost production brought about by the coronavirus-imposed lockdown earlier in the year.

In fact, Asia-Pacific was the world’s largest regional source of naphtha demand in April, with buying interest helped by refiners east of Suez cutting runs before those in the US and Europe.

However, the economics of trade movements were dented by higher freight costs in the second half of April.

The relative strength in Asia-Pacific demand brought the front-month naphtha East-West spread to $68/tonne last week, slightly down from the highest-ever level at around $75/tonne in late April.

Freight rates continued to dampen the arbitrage window, with both the East-West spread between the June CFR (cost and freight) Japan naphtha and the CIF NWE prices softening to $27.50/tonne last week, according to a major player.

“Freight for the [route] LR2 Mediterranean-Japan voyage had dropped from the record high of $9m in late April to $7.5m in early May,” market source confirmed.

However, arrivals in Asia in May are slated to match December and January levels and, according to a source, could even outpace the traditional 2m tonnes.

At least 1.12m tonnes of naphtha loaded at European ports for delivery east of Suez in April, the highest for any month since November 2018, a market player said.

The total tonnage is likely to be even higher, although loading delays for several cargoes have made it difficult to confirm the destination of some tankers.

Around 740,000 tonnes were booked to load in the first half of April, before clean tanker freights on the Mediterranean-Japan route reached record highs, a source said.

FREIGHT RATES SHOOT UP DURING PANDEMIC
The economics of moving naphtha on the route were largely unviable throughout the second half of April because of the high freight costs amid the surging demand for tankers for storage purposes.

According to a major naphtha trader, demand for Long Range 2 (LR2) tankers for use on the route, and for use as floating storage in Europe, brought the lumpsum cost of hiring an LR2 to $9m on 23 April.

The highest ever lumpsum assessment of the clean LR2 Mediterranean–Japan 80,000-tonne rate before the coronavirus pandemic was $4m.

This could dampen arbitrage from Europe to the East as carrying clean products amid limited vessel space constraints could restrict excess flows.

Meanwhile, feedstocks economics continue to support naphtha consumption rates at petrochemical units, but downward pressure is likely to mount as margins decline after falls in the May monthly contract prices for ethylene and propylene. 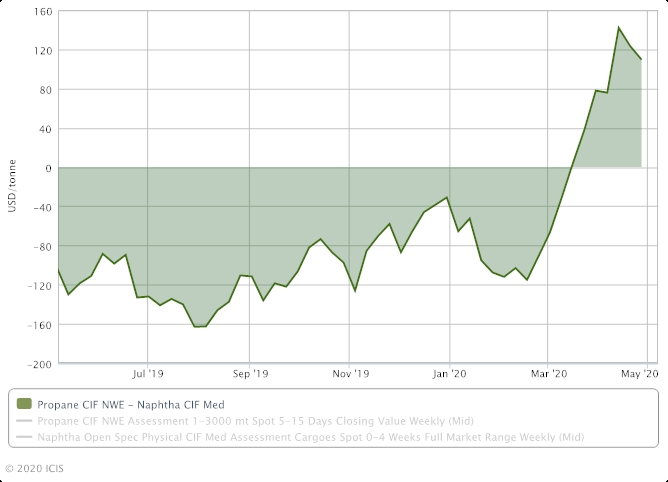 –
ICIS ANALYST VIEW
According to ICIS Senior Analyst Ajay Parmar, Europe and the US margins for naphtha producers will fall in the coming months as refineries cut run rates as a result of lockdown measures.

“US refinery throughputs dropped by 23% from January to April, with operating rates cut by up to 40% in April; these throughput cuts will be sustained for the coming months, as refineries are really feeling the pain,” said Ajay.

The analyst said demand for naphtha will primarily come from Asia in the second quarter as countries in this region recover from the lockdowns sooner than countries in the west.

“Excess naphtha from the US and Europe is likely to head to Asia, and we can expect the monthly trade in naphtha from west to east to rise from the usual 2m tonnes in Q2,” said Ajay.

“However, cargoes usually used for naphtha trade will be used for temporary product storage throughout the lockdown period, as land storage dries up, making naphtha trade more expensive.”