SINGAPORE (ICIS)–China’s petrochemical industry faces yet another challenge – rising inventories and congestion at ports – as global supply far exceeds demand with the country’s own exports hit hard by the fallout of the coronavirus pandemic.

Demand for finished goods from two of China’s traditional export destinations, the US and Europe, has shrunk as their wilted economies are slowly trying to recover.

The same condition applies to other regions, including Asia, where countries are at different levels of lockdowns to prevent the spread of the deadly coronavirus that has claimed nearly 300,000 lives and infected more than 4m people worldwide.

With demand poor elsewhere in the world, China – which emerged from a pandemic-induced lockdown much earlier than the others – has become the favorite destination for global exporters.

Freight talks in Asia are dominated by China-bound requirements this week, with robust demand for cargoes out of southeast Asian and Middle Eastern ports.

“Almost all May tonnage space has been taken up, and there are still many cargoes awaiting placement within the month,” a ship broker said.

Asian and Middle Eastern refiners have sold actively in the last month diverse products such as benzene and paraxylene (PX) to China-based customers, market players said.

But influx of imports threatens to overwhelm storage in China.

“We have seen and will see constantly inventory rise of many commodities in China,” said Ann Sun, analyst at ICIS Asia Petchem Analytics.

“It’s much more obvious for the solid chemicals, polymers and synthetic rubbers, because of easier storage conditions compared to liquids,” she added.

Sellers are not keen to offload cargoes at prices lower than their cost, and will wait to recoup their investments, Sun said.

BENZENE
China’s benzene imports are rising, causing an inventory build-up, which is expected to peak in June, with huge volumes expected to arrive from May.

Asian benzene cargoes are facing difficulty in finding their way to the US because of the closed arbitrage window, ICIS analyst Jenny Yi said.

“As a result, China is the priority of most Asian sellers. European and Middle Eastern sellers are also looking to ship extra cargoes to China, given that the country’s demand recovery has been faster than that of other regions,” she added.

METHANOL
At Taicang port in east China’s Jiangsu province, ships need to wait for around 10 days before unloading methanol, resulting in a growing number of vessels waiting to get berths.

An estimated 700,000 tonnes of methanol were at Jiangsu ports last week, with more volumes coming in, according to traders.

“Usually the cargoes do not have any price gap,” she said.

Domestic supply is down due to shutdowns at local plants, while end-user demand is poor because of reduced export orders for downstream textile products.

In the week ended 8 May, MEG inventories grew 4.9% week on week to 1.23m tonnes, according to ICIS data.

The daily offtake rate at a major port in east China stood at 5,700 tonnes; while that of another major port was at 3,500 tonnes during the week.

PTA is largely used in the production of polyester fibre, which in turn is used to make fabrics for apparel and home furnishings such as bed sheets, bedspreads, curtains and draperies.

Inventories are estimated to be at slightly above 4m tonnes, more than its monthly demand consumption, worrying market participants although domestic PTA prices have been relatively steady. 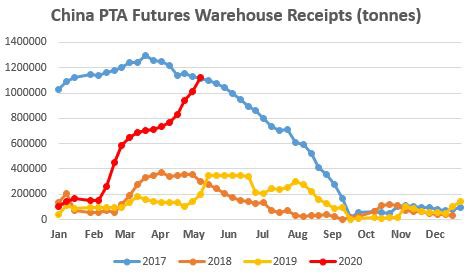 Photo: Aerial photo taken on 17 April 2020 shows Rizhao Port in operation amid the coronavirus outbreak. The port is located in Shandong Province in east China. (Photo by CHINE NOUVELLE/SIPA/Shutterstock)