LONDON (ICIS)–European plasticizers players remain in the dark about future developments and describe complexities in a fragile market, with conditions open to change each day.

– Different levels of demand depending on application

The complexities between different countries and customers and applications are making business decisions increasingly challenging for plasticizers players.

“Even though we have restarted, production is still very difficult and only two to three days per week,” one customer said of its French site.

“We are still reducing stocks and we are completely in the dark [for Q3], and it is too early to make a forecast,” another consumer who has sites in various locations across Europe said.

DEMAND LOW
Output from buyers is anywhere from 30% to 70%, depending on region and application.

Public holidays next week across most of Europe are likely to prompt some sources to take advantage of this and extend downtime from Ascension day on 21 May.

It is no surprise that the automotive industry is suffering particularly, with sources describing it as a “disaster” or “in crisis.”

Some car manufacturers have resumed production but operating rates are very low and some are operating on short-day weeks, not due to a lack of material or personnel but due to lack of demand.

Consumer confidence is low and most Europeans are not in a rush to go out and buy a car.

“Governments need to give more incentive for end-user to buy news cars – automotive is very complicated and takes a while to recover,” according to one source.

The solid lines are based on EU car makers trade group ACEA’s data, with the 16-year range referring to the 2004-2019 period. 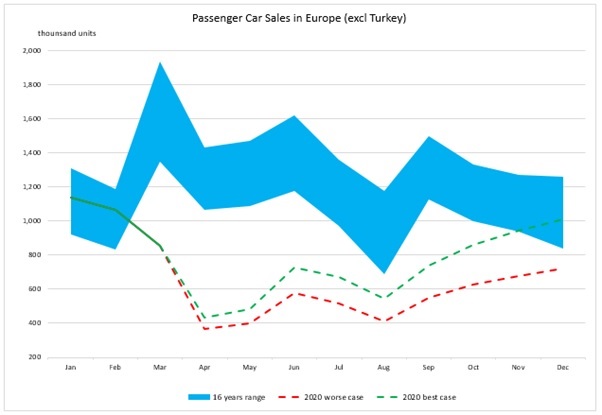 –
There are some areas that provide some more consistent orders into construction, some flooring into do-it-yourself (DIY) stores is returning and the medical sector continues to run at normal rates.

However, this accounts for a small proportion of demand, which across all subsectors tt is running at around 50%, according to sources.

All sources are waiting for June and pinning hopes on some improvement, but noted this would be already starting from a low point.

“March was quite ok, April was a disaster and no signs of May improving yet,” one seller said.

DOWNWARD PRESSURE
Inevitably, the low demand and falling feedstock costs have put pressure on pricing; it is diisononyl phthalate (DINP) that is feeling the brunt of this, though dioctyl terephthalate (DOTP) is not far behind.

There has been an exceptionally wide range of figure heard for DINP and as one seller put it “price is not the issue, it is demand”.

Those that are buying hand to mouth seem to be at the upper end of ranges, but if customers are able to commit to a bit more volume straight away, then a bigger discount can be agreed as sellers look to try and balance inventories.

There is plenty of product on offer from both local producers and importers.

Some also suggested that the buyers that are able to switch between DOTP and DINP have moved back to DINP given the number of suppliers offering and the more competitive prices. 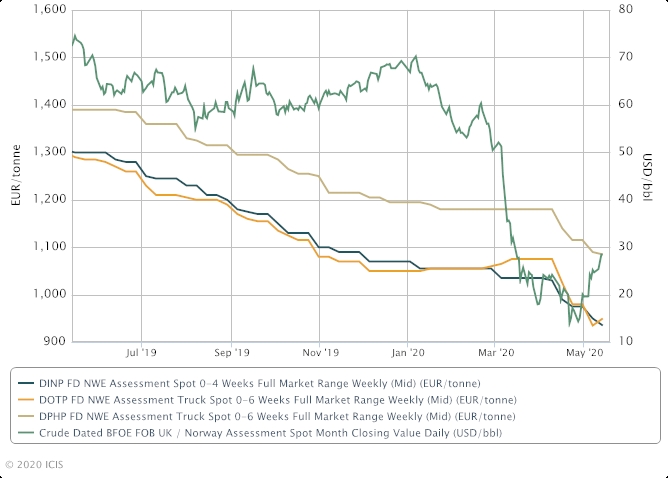 –
There is still too much uncertainty that lies ahead and end-users remain cautious about how and when demand will return to the market.

Plasticizers are used in plastics or other materials to impart viscosity, flexibility, softness, or other properties to the finished product.