The lower end is seeing either stable or slightly increased pricing, because demand is still much higher compared with pre-coronavirus levels.

As a result, the market is not divided into as many tiers as it has been over the last two months.

The highest prices in the spot market continued to come down as supply grew, from increased domestic production as well as increased Asian imports.

For example, IPA spot prices free on board (FOB) US Gulf dropped 25 cents/lb on the high end, while lower end prices were unchanged. 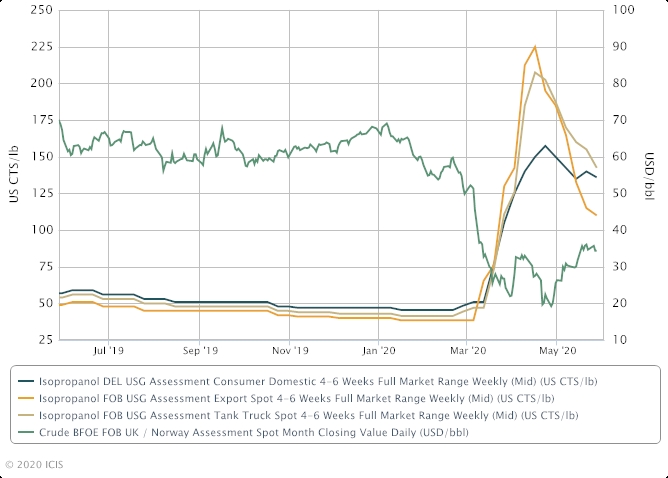 Several separate price increases were introduced last week with the goal of implementation by 1 June.

One price increase initiative, with a target date of 8 June, was introduced this week. Representatives for LyondellBassell were contacted but had not replied by the time of publication.

While some market participants said they had difficulty sourcing IPA for large deals from only one producer, supply is far more ample than it was in late March, when almost everyone struggled to find it due to the sudden surge in demand.

Domestic IPA demand remains high, and while supply has loosened, many US buyers are still on partial sales allocations and filling their remaining space with Asian imports.