SINGAPORE (ICIS)–China’s overall petrochemical demand has weakened in July while supply is projected to increase, dimming the market outlook in the near term.

Inventories of major chemicals such as benzene, polyolefins, ethylene glycol, acetone and toluene all posted increases in the week ended 17 July, according to ICIS data.

Softer demand was reflected in spot market prices as tracked by the ICIS China Petrochemical Index. The index fell to 877 on 17 July, down from 898 on 8 July, and lower than the June average of 888.6. 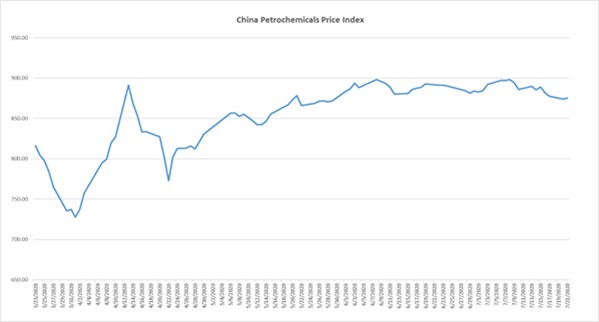 END-DEMAND STILL WEAK
Spot petrochemical purchases have slowed down due to a combination of recent price spikes, high stocks and poor end-demand.

For propylene oxide (PO), recent market gains have driven up prices of downstream polyether polyols, whose producers have had to struggle with limited margins due to inability to fully pass on increased costs to end-users.

Downstream sectors, such as automobile, furniture and fabrics, are still in the process of a slow recovery.

PTA inventory among producers and downstream end-users alike has remained high, while the government is trying to help out exporting companies survive by re-directing their products to the domestic market.

Scheduled turnarounds at another major downstream – liquid epoxy resins (LER) – will also further weaken demand for BPA. The LER market, nonetheless, is relatively healthy on the back of government’s subsidy on its downstream wind power industry.

Petrochemical end-users in general are also hesitant to buy as new capacity coming on stream will boost domestic supply in the third quarter.

For isopropanol (IPA), acetone and polymethyl methacrylate (PMMA) markets – considered as bright spots in the petrochemical space amid the coronavirus pandemic – demand has started to wane in July following spikes in prices.

IPA, which goes into alcohol, along with feedstock acetone, has had strong support from mid-May to June but consumption has since cooled off.

The same is true for PMMA sheet – downstream of methyl methacrylate (MMA) – which is used in medical face shields. Strong demand may not be sustained for long as the end-use as a protective gear against the coronavirus has a long shelf life.

The recent surge of MMA prices in China has also made its exports of the product for use in making PMMA sheets less competitive compared with material from other countries.

FLOODS FURTHER CURB DEMAND
China’s rainy season usually starts in the third quarter and normally lasts two to three weeks, but is turning out to be extreme this year.

Floods have hit a number of provinces in southwest, central and south China since June, severely hitting demand for petrochemicals that go into infrastructure construction.

Emulsion coatings is the second-largest downstream industry of butyl acrylate (butyl-A) with about a 35% share of total consumption.

Production of emulsion coatings in July were much lower than in June due to a slowdown in construction projects amid the floods, according to ICIS data.

Demand for adhesive tapes – the largest downstream market for butyl-A, was also lacklustre.

Demand for PE pipes was likewise hit, but the floods provided some boost to the polypropylene (PP) yarn market.

In some rural areas, woven bags – which are made of PP yarn – usually filled with sand are being piled up to help stop the floods, market sources said.

CONSUMER DEMAND LAGS BEHIND OUTPUT GROWTH
China’s economy posted an annualized growth in the second quarter, rebounding from a slump in the March quarter, as it had emerged from a pandemic-induced lockdown ahead of the rest of the world.

While production indicators were improving, sales of consumer goods have continued to decline, indicating an unbalanced recovery for the world’s second-biggest economy.

June consumer goods sales slipped by 1.8% year on year, against expectations of a 0.3% increase.

Per capita disposable income after deducting price factors in the first half of 2020 declined 1.3% year on year, while per capita consumption expenditure was down a 9.3%, official data showed.

The Chinese government hopes to strengthen employment in the second half to drive up consumer demand.

MORE FISCAL STIMULUS LIKELY
Economic recovery in China will hinge on massive fiscal stimulus measures, and the government is trying to identify drivers of future growth.

Among the measures is a project launched by the Ministry of Commerce promoting small stores across 100 pilot cities, with the aim of building 1,000 small-store clusters by 2025.

Based on a government plan drafted on 9 July, development of rural areas is also targeted.

Housing and urban-rural development will also get a financing boost. On 17 July, loan contracts totaling CNY436bn were signed with five provinces and seven cities, with the bulk of the funds expected to support renovation projects.

The Chinese economy is largely expected to avoid a recession this year, but growth will moderate substantially to low single-digit levels while industrial economies in the west expect a steep GDP contraction amid the coronavirus pandemic.