LONDON (ICIS)–Despite the ongoing recession caused by the pandemic, the EU-backed MMAtwo recycling project has managed to continue its research, starting up a depolymerisation unit including a first-in-the-field pre-treatment plant, according to the project’s chairman.

MMAtwo produced in June the first samples of recycled methyl methacrylate (R-MMA); Jean-Luc Dubois said there had been a number of technological advancements in the project, which is set to use twin-screw depolymerisation technology.

Nearly all MMA is polymerised to make homopolymers and copolymers; the largest application is casting, moulding or extrusion of polymethyl methacrylate (PMMA) or modified polymers.

The MMAtwo project is backed with financing from the EU and lead by producers and research institutions.

“There was a plant previously using this process [twin-screw depolymerisation], but that could only process top quality MMA. We wanted something that could process everything,” said Dubois, who is also scientific director at French chemicals major Arkema.

He added that several polymethyl methacrylate (PMMA) waste products (post-industrial and post-consumer) had already been depolymerised by Arkema at bench scale as high mass yields with high monomer content can be achieved with most of the grades. 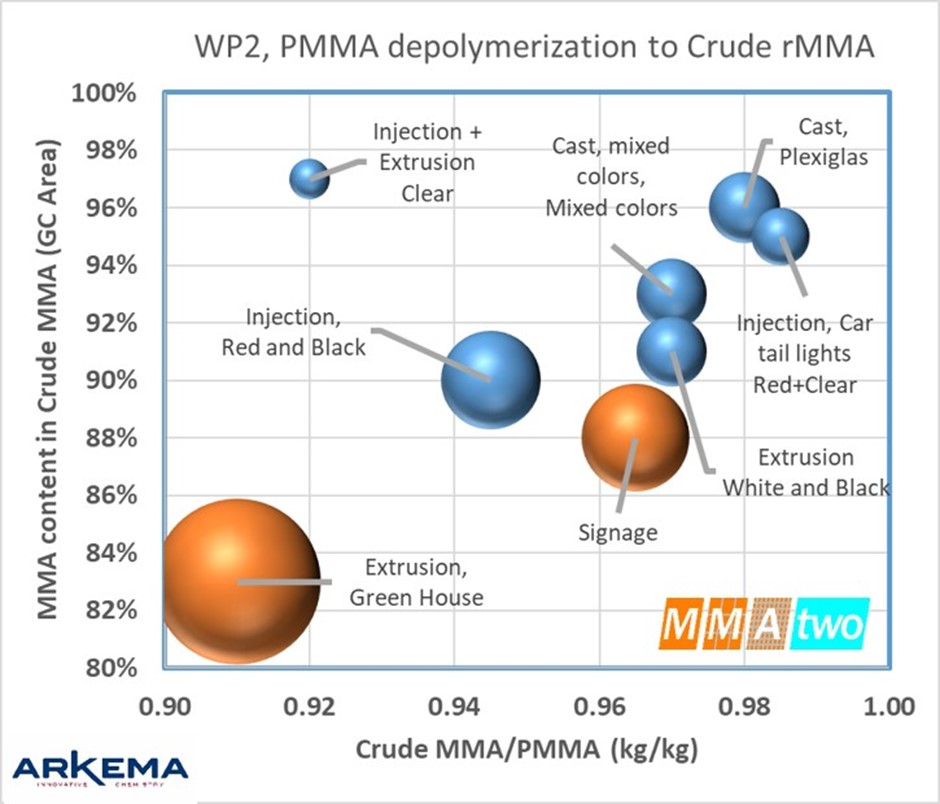 –
This is an area where MMAtwo has seen more success than initially expected and, despite some minor delays linked to the pandemic, the project has managed to process more types of waste products than initially thought.

Despite the progress, the project remains in a pilot phase, however; it produced 700 kilograms of R-MMA during the first test in June.

The next stage would be further runs, with partnering MMA producers taking part in the project using the samples in production.

PMMA samples have been produced from batch and they have been compared to virgin material; most samples within the range can cope with odour issues and behave the same way than virgin product in terms of optical performance when put under accelerated aging tests.

A key next stage would be to see if the technology handles tougher, post-industrial materials, that may contain copolymers or inorganics like screens from computers or televisions.

According to Dubois, a good opportunity to come from the recent pandemic is the widespread investment in PMMA sheets, used as protective shields in hospitals, restaurants and shops.

He said this material is ideal for recycling due to the use of pure, transparent acrylic sheet.

COLLECTION: ALL TO BE DONE
Collection of waste is still a major objective for the project, which is looking at the potential to establish a comprehensive infrastructure across the 27-country EU.

“For any business, your life line is your feedstock, all revenue is based on what you can collect and convert,” said Simon van der Heijden, co-founder of plastics recycling firm Heathland, which is also part of MMAtwo, and coordinator of the project.

The project has successfully identified the multiple waste streams in the EU, and is currently collecting 9,000 tonnes across the bloc, an amount expected to increase considerably as the project continues; end-of-life product remains the main challenge.

He added that the pre-treatment process being tested by Heathland has become one of the project’s milestones this year, and a “first of its kind” in Europe.

“All PMMA that is depolymerised needs to be pre-treated; however, to do this automatically is new – waste collection and straight into pre-treatment, into suitable feedstock to depolymerise. Innovative separation technology and automated,” he said.

There are two key areas that will gather momentum in the market for recycled MMA: government targets and the price of the product versus the virgin monomer.

EU LEGAL FRAMEWORK
Despite this being a partially funded EU project, there is no legislation currently in place for this sector.

Much of the government targets are related to packaging, impacting products such as polyethylene (PE), polypropylene (PP) and polyethylene terephthalate (PET).

“PE/PP worldwide production is more than ten times that of PMMA, it’s easier to collect and [it is a] lower-value material,” said Dubois.

“You consume a lot of energy to depolymerise PE but you don’t save that much energy; however, you do when you produce and recycle PMMA. It is a material harder to collect but of higher value: it is similar to the situation with nylon 6 and nylon 6,6,” said Dubois.

This is an area where the results for R-MMA have been positive, managing to reduce the carbon footprint, compared with the main virgin production methods. 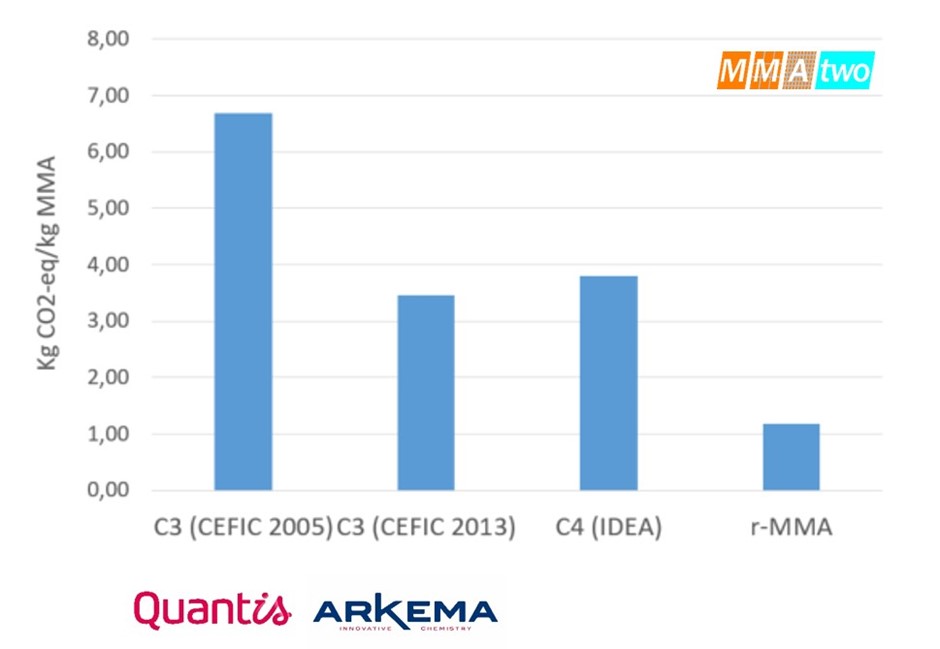 IT’S ALL ABOUT PRICE
While there is interest in the market over sustainability, price and the security of supply are key factors for any purchasers.

At this stage, R-MMA is not available for commercial sale in Europe.

“Historically, it was always a question of price; now, with MMA price lowering, it’s a lot more difficult to make R-MMA into a viable business,” said Van der Heijden.

“So, the question is: what price is viable? The original aim was to be 10-15% below the price of virgin MMA.”

European MMA prices have bounced back after 27 months of pricing declines, which have eroded producer margins.

At the bottom of the pricing cycle for virgin material, it makes it very difficult to make R-MMA a viable business with the additional production costs.

In some markets, recycled product has demanded a premium on virgin, linked to government targets and company sustainability pledged, but this will ultimately be driven by the consumer.

“Firstly, we need to let the PMMA users know that the product can be recycled, so collection can grow. Users also need to be convinced they can source enough material, because they need to grow on size, otherwise this could limit the penetration,” said Dubois.

“It needs to be driven by consumers, the more they ask for it then more it will drive the change. If they want to have R-MMA then they need to show up.”