This story is updated to show more clearly in the 14th paragraph the Mexico Pacific LNG project is based in Sonora state.

HOUSTON (ICIS)–As Mexican imports of US natural gas ramp up to record highs with new capacity, Mexico’s president has become a recent promoter in championing the potential for excess gas to be exported as LNG.

However, these efforts by president Andres Manuel Lopez Obrador, known as AMLO, may instead be a warning signal to aspiring liquefaction developers that the role of the government may come at a cost to project development in Mexico.

Sempra’s Costa Azul project in Baja California was poised to make a final investment decision (FID) earlier this year, but the project may be facing more setbacks given the changing regulatory and political landscape.

The export permit would be the first of its kind to be granted in Mexico, which so far is a net importer of gas from expansive US cross-border pipeline capacity and the additional LNG terminals at Manzanillo and Altamira.

Executives at Sempra said during the company’s second-quarter earnings presentation on 5 August that the company continued to work with the “highest levels of government” and local officials to obtain the permit.

However, market sources said unconfirmed reports that the AMLO administration had requested the company develop a second liquefaction site in Topolobampo in the state of Sinaloa could signal further delays for Costa Azul. 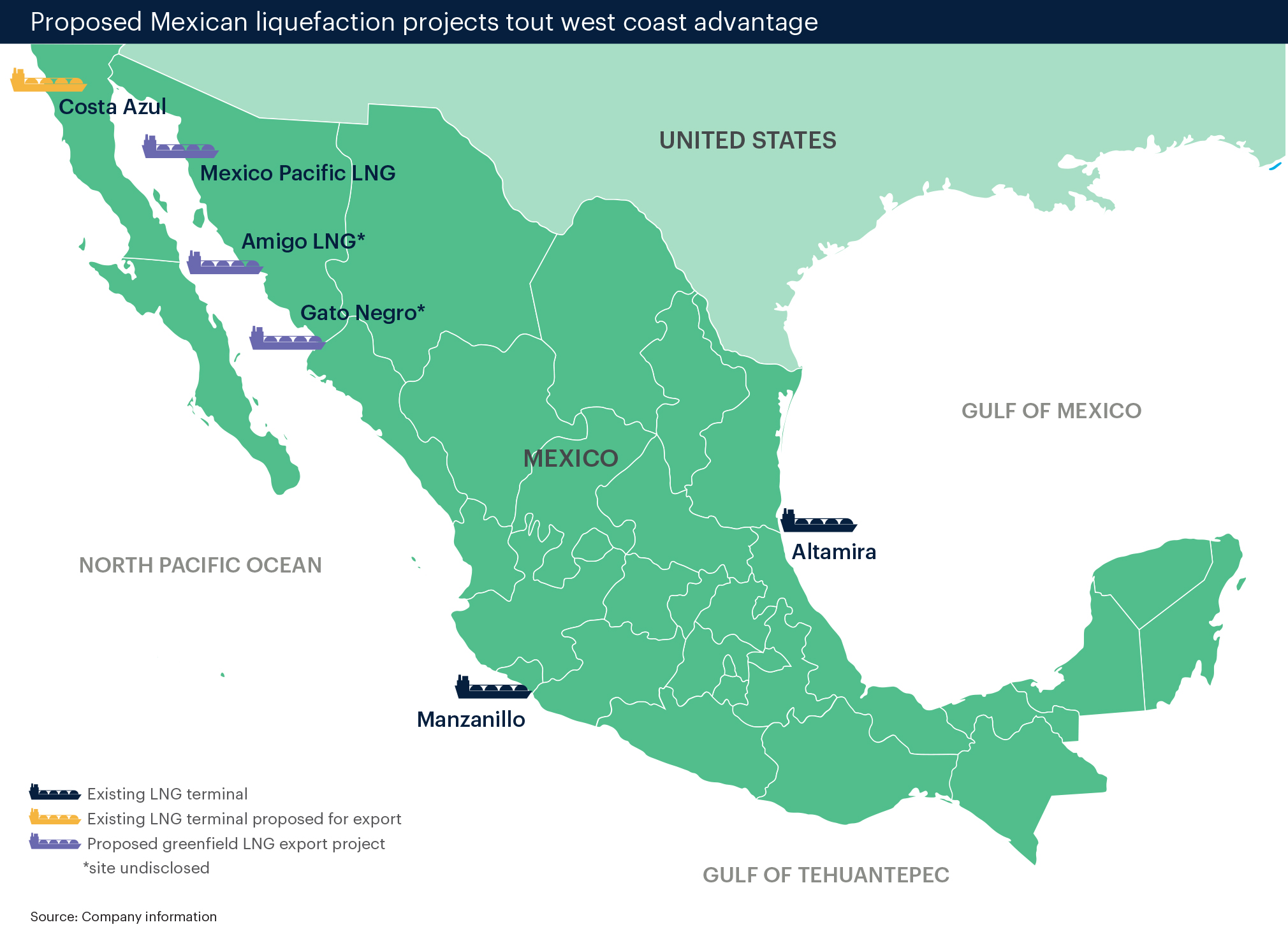 Sempra did not respond for comment on the pending SENER permit or the second site request.

Sempra, through its Mexico arm IEnova, is building a liquid fuels marine terminal in Topolobampo, which was expected to be operational by the end of 2020.

Sources said it was not likely the company would look to develop a second liquefaction project in Mexico, as the company also was looking to advance its greenfield Port Arthur project in Texas and its expansion trains at the existing Cameron LNG.

It was unclear why AMLO mentioned supporting a proposed LNG export project from Topolobampo in his public remarks earlier in August, when other LNG export developers are looking to develop greenfield ventures in other sites.

Mexico Pacific LNG is proposed in Puerto Libertad in the state of Sonora. CEO Doug Shanda said in a 20 August interview with ICIS that Mexico’s regulatory approach had more appeal than in countries such as Australia or the US.

Shanda said in Mexico, a company could file for its permits first and then develop technical details on the project, rather than the upfront investment required in the US, where projects must be relatively more advanced in its front-end engineering and design (FEED) first before receiving regulatory approval from the Federal Energy Regulatory Commission (FERC).

Shanda said their project’s close proximity to the Permian and San Juan shale basins was also a benefit, particularly given the shorter pipeline access to their site in Sonora from some parts of the Permian than even some of the proposed greenfield projects in the US Gulf would be from the Permian basin.

Mexico Pacific LNG has four non-binding agreements in place with potential offtakers from what Shanda described as their target region – South Korea, China and Japan – although Shanda declined to give specifics on the companies.

The project’s FID is now targeted toward the second half of 2021.

Offtake terms are being offered on a free on board (FOB) basis or what Shanda described as a “modified” FOB basis for customers without exposure to US gas markets.

Shanda said the project would not likely offer on a delivered ex-ship (DES) basis at first and would prioritise offtake agreements in order to secure financing, rather than offer equity in the project.

The project is permitted for 12mtpa. Shanda said Mexico Pacific LNG could FID after securing its first 4mtpa tranche, instead of scaling up. He said the company was confident enough after reaching its non-binding agreements that the project could FID on its first phase and advance through the third phase based on customer interest.

Other developers have also proposed sites on Mexico’s west coast, including Amigo LNG and Gato Negro, although these projects were not considered as advanced in either permitting or marketing.