Analysts at Oxford Economics said this week that in spite of the coronavirus pandemic, the sector is anticipated to grow by nearly 35% to 2030, reaching a total of $5.8tn.

This forecast, however, is on the proviso that a vaccine is rolled out in early 2021, and that no second wave of infections causes further lockdowns.

There has been significant regional variation following quarantine restrictions imposed earlier in the year, as industrial activity slowed in a bid to cap rising infection rates.

Construction has been less volatile than other sectors downstream of the chemicals industry, but this could be linked to completion of projects that had already received funding.

There is uncertainty about whether financing will be available for future projects as plans for new developments begins years before any building activity is scheduled, but Oxford Economics analysts are optimistic.

“Massive monetary stimulus by central banks around the world means that credit conditions will remain very accommodative for the foreseeable future, an important factor for financing construction projects,” they said.

Putting this and relative strength discussed in some markets, the European construction industry is unlikely to drive growth on a global perspective.

CHINA POWERS AHEAD
Oxford Economics expects that two thirds of overall growth by 2030 will be accounted for by China, the US, India and Indonesia.

China is already tracking a recovery following lockdown earlier in the year, it added. 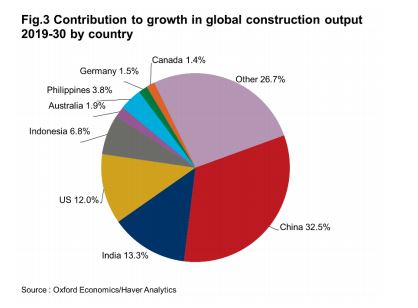 –
“As the rest of the world was entering lockdown in Q2, construction activity in China started increasing rapidly – nearly half of the drop in output was recouped in the second quarter alone, and we expect it to return to pre-pandemic levels by early 2021,” said the analysts.

“We are likely to see similar patterns in other countries, albeit with a one-quarter lag.”

The US has also marked an uptick in the second half of the year, with spending in construction rising for July, and sentiment from the chemicals industry eyes the industry as strong going forward.

An increased focussed on technology and automation could create space for chemicals not traditionally used in the construction industry to enter the field.

“Despite the pessimistic near-term view as the world copes with the coronavirus pandemic, the outlook for construction activity over the next decade offers a wealth of opportunities,” said Oxford Economics.