SINGAPORE (ICIS) — ICIS is expanding its LNG demand forecast to rising markets in South Asia and the Middle East. The most recent additions are Pakistan and Kuwait.

Kuwait, with its upcoming 22mtpa Al-Zour terminal, is one of the most exciting LNG growth countries in the coming year. ICIS forecast Kuwait import to grow exponentially and will rival Pakistan import in three years. Spurred on by the country’s effective oil-to-gas switching policy, gas consumption nearly doubled in the past decade and is expected to continue to grow strongly in the coming years. The country currently imports less than 4 million tonnes of LNG per annum.

Yet, Kuwait is not the first Middle East country to have gone down the road of oil-to-gas switching – mainly to generate power and to fuel industrial expansion – and will probably not be the last, as more Middle Eastern countries seek to retain oil-export revenue.

In terms of domestic gas production, Kuwait is expected to increase as gas fields expansion continue, notably the Jurassic gas project. ICIS forecast shows that LNG will play an increasingly important role, as soaring gas demand far outpaces rising domestic production in Kuwait. Pakistan gas production, on the other hand, will continue to decline as upstream spend falters. This is likely the biggest factor in driving Pakistan’s LNG imports in the coming years. Production decline has accelerated rapidly since mid-2019 and is yet to stabilise. 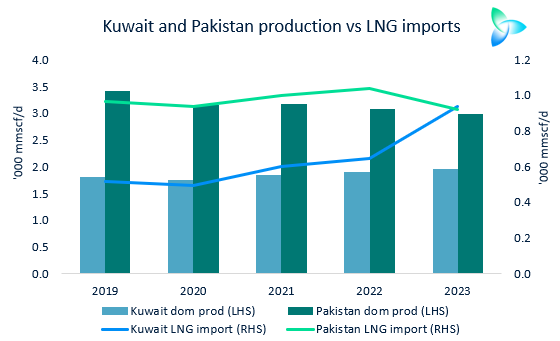 On the demand side, Pakistan is moving toward other fuels in its power sector, thus lowering gas consumption in power. However, its rapidly declining domestic gas production and latent direct gas demand are beginning to tip the scales back to growth. This is expected to push LNG imports closer to 8m tonnes in 2021 and 2022.

While a turn away from gas is already well underway in the power sector, several other sources of demand are moving to take its place. Fertilizer production already saw a year-on-year increase of 18% in the fiscal year ended 30 June 2020, as power producers lowered their offtake from domestic gas fields. Meanwhile, household consumption is prioritised and expected to continue to grow 4% annually as the country’s two distribution companies widen their networks. More gas could now also be made available to industrial consumers after several years of chronic supply shortages.

The introduction of third party access to one of the country’s two import terminals and the emergence of new buyers in the southern Sindh province, which were previously unable to buy LNG, are also promising signs of continued LNG demand growth into Pakistan.

ICIS LNG demand forecasts for Pakistan and Kuwait are now live in LNG Edge. The LNG Edge Demand Forecast is a rolling 24-month forecast which reacts to new market developments as they happen.

As well as the new demand forecasts for Pakistan and Kuwait, ICIS already forecasts LNG demand for Malaysia, Indonesia, Japan, China, South Korea, India and Taiwan. We will be looking to roll-out Bangladesh, Bahrain, UAE, Singapore, Thailand, Vietnam, Myanmar and Philippines in the coming months.