NEW YORK (ICIS)–Should oil companies be investing in solar, wind, battery technology and networks of electric vehicle (EV) charging stations? Maybe, in the broader view of themselves as energy companies. And especially if the consumer shifts to EVs faster than expected, crushing demand for transportation fuels.

It comes down to whether they’re focused on the product or the customer. If the customer is demanding different kinds of energy, it should make sense to provide it, as long as the economics are there.

This would have broader implications for petrochemicals supply and demand. If more oil companies prioritise green energy projects, viewing them as the future growth drivers, there may be less emphasis on building petrochemicals and polymers capacity.

And with less transportation fuel demand, refining capacity could be cut, thereby reducing naphtha feedstock supply as well as aromatics and propylene co-product.

Already some traditional refineries are being converted to biorefineries in Europe as well as in the US. In these cases, it’s not just about swapping feedstock. Rather, overall fuels output is significantly reduced.

France-based Total and the UK’s BP are among those leading the charge in a massive transition towards renewable energy, building brand-new businesses in power generation, energy storage and charging stations.

Both have committed to become “carbon net zero” by 2050. For traditional oil giants, this is a radical pivot.

SOLAR IN THE SPOTLIGHT
The International Energy Agency (IEA) sees solar as the future of electricity as governments and investors focus on clean energy.

“I see solar becoming the new king of the world’s electricity markets. Based on today’s policy settings, it is on track to set new records for deployment every year after 2022,” said Fatih Birol, executive director of the IEA, in the group’s World Energy Outlook 2020 report released on 13 October.

“If governments and investors step up their clean energy efforts in line with our Sustainable Development Scenario, the growth of both solar and wind would be even more spectacular – and hugely encouraging for overcoming the world’s climate challenge,” he added.

Total sees global solar and wind power capacity growing 10%/year through 2030, with solar capturing around 70% of the additions, as it outlined at its Investor Day on 30 September.

The company has 7 gigawatts (GW) of solar and wind power generation capacity, and aims to quintuple this to 35GW by 2025 with major solar projects in Europe, the Middle East and India, and offshore wind farm projects in the UK and South Korea. 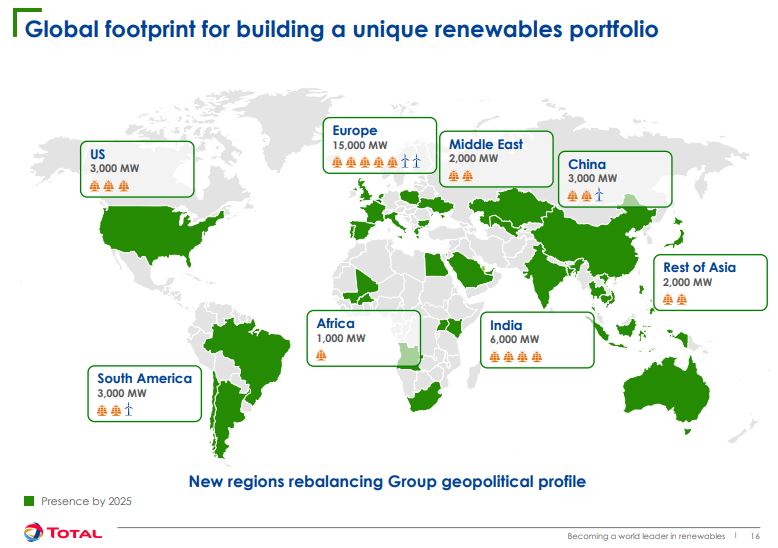 The renewable energy push is not just a European phenomenon, but increasingly global.

By 2025, Total expects its global renewable power footprint to be 15GW in Europe, 6GW in India, 3GW each in the US, China and South America, 2GW each in the Middle East and Rest of Asia, and 1GW in Africa.

BP noted that global average costs for solar and offshore wind builds have declined by 90% and 60%, respectively, over the past decade. It expects costs to fall a further 30-40% over the next decade, it said at its BP Week event in mid-September.

Renewables – solar, wind and bio-power – have the potential to become 45% of global power capacity by 2030, it noted.

“We are leaning in and plan to build material renewables businesses, with an ambition to have developed 50GW [of capacity] by 2030,” said Dev Sanyal, BP executive vice president for Gas and Low Carbon Energy. 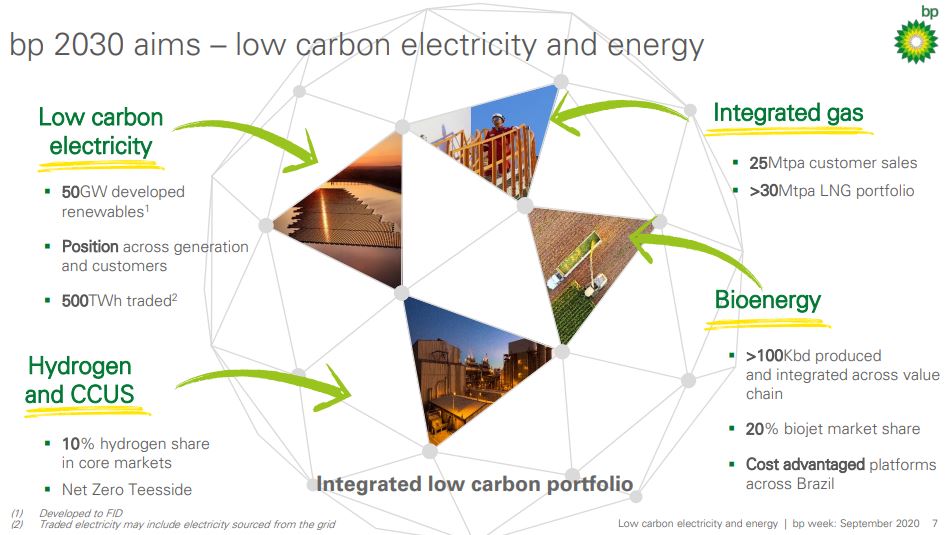 BP solar projects in the pipeline include Bighorn Solar in Colorado which will supply 300 megawatts (MW) to the steel company EVRAZ, and the 260MW Impact solar project in Texas, where BP is offtaking 100% of the electricity. It is also developing solar projects in Spain, Brazil, Australia and India.

On 10 September, BP entered the offshore wind power market through a partnership in the US with Equinor. It is paying Equinor $1.1bn for stakes in existing assets and will jointly develop four projects in offshore New York and Massachusetts to generate a combined 4.4GW – enough to power over 2m homes.

BP’s onshore wind energy portfolio in the US already generates 1.7GW of power.

OIL DEMAND FOR PETROCHEMICALS
BP and Total expect oil demand to decline over the long run. Total sees this not just for transportation fuel, but for chemicals and plastics as well.

Under two of its scenarios, “Momentum” and “Rupture”, “the message is that despite an increase in demand for plastics, especially in non-OECD countries, the oil demand for petrochemicals is likely to come down,” said Helle Kristoffersen, president of Strategy & Innovation at Total. 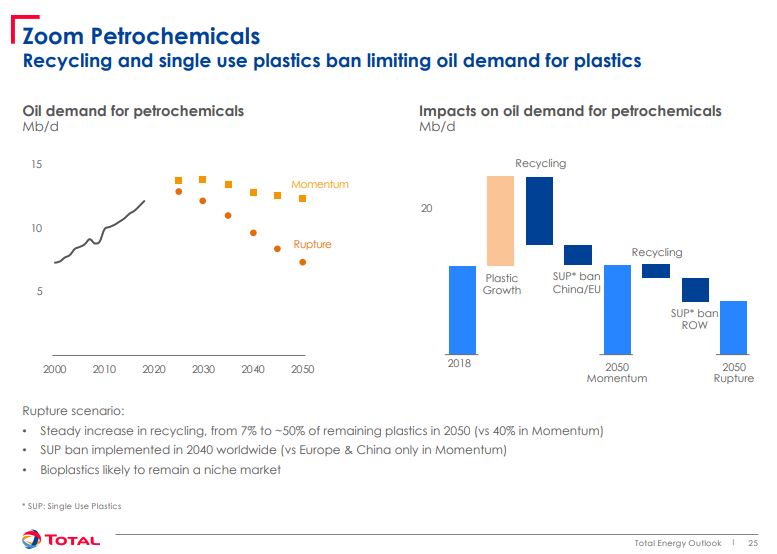 Total assumes a steady increase in plastics recycling on one hand, along with a progressive ban on single-use plastics – first in the EU and China, and then moving worldwide.

In the Rupture scenario, the single-use plastics ban is implemented worldwide, where in Momentum it is only in Europe and China. This drives plastics recycling rates to rise from 7% today to 50% by 2050 under “Rupture” and 40% under “Momentum”.

Total sees oil demand for petrochemicals peaking between the mid-2020s and 2030 under both scenarios. The company maintains a sizeable footprint in global petrochemicals.

BP in June 2020 announced the planned sale of its global petrochemicals business to INEOS for $5bn.

“The future of our [chemicals] industry is no longer in oil and gas, but in recycled material. And companies that move into that area now will be the winners in the future,” said Paul Hodges, chairman of New Normal Consulting, on an ICIS podcast.

“Sustainability is making this major change in the world and that is where we’re going to make our profit,” he added.

BIOFUELS PUSH AND REFINERY CONVERSIONS
In what Total calls the coming “mobility revolution”, it sees a “drastic reduction” in oil demand for transportation by 2050, potentially by well over 50%. Oil demand would be replaced by electricity, natural gas, biofuels and hydrogen.

The company plans to convert its Grandpuits refinery in France to produce 400,000 tonnes/year of biofuels starting in 2024, while also adding a plastics recycling facility, a PLA (polylactic acid) bioplastics plant and solar power at the site at a total cost of over €500m.

The new biorefinery capacity of around 7,000 bbl/day will be a huge step down from the 100,000 bbl/day capacity of the existing refinery, although it was only operating at about 70% of capacity because of reduced pressure on a crude oil pipeline.

The biorefinery will produce aviation fuel, biodiesel and 50,000 tonnes/year of bio-naphtha for bioplastics production.

The cost to convert to, or add biofuels capacity to existing facilities range from $500-750/tonne in capital spending (capex), according to Total. It identified projects that could cost up to $825m at its Investor Day presentation. 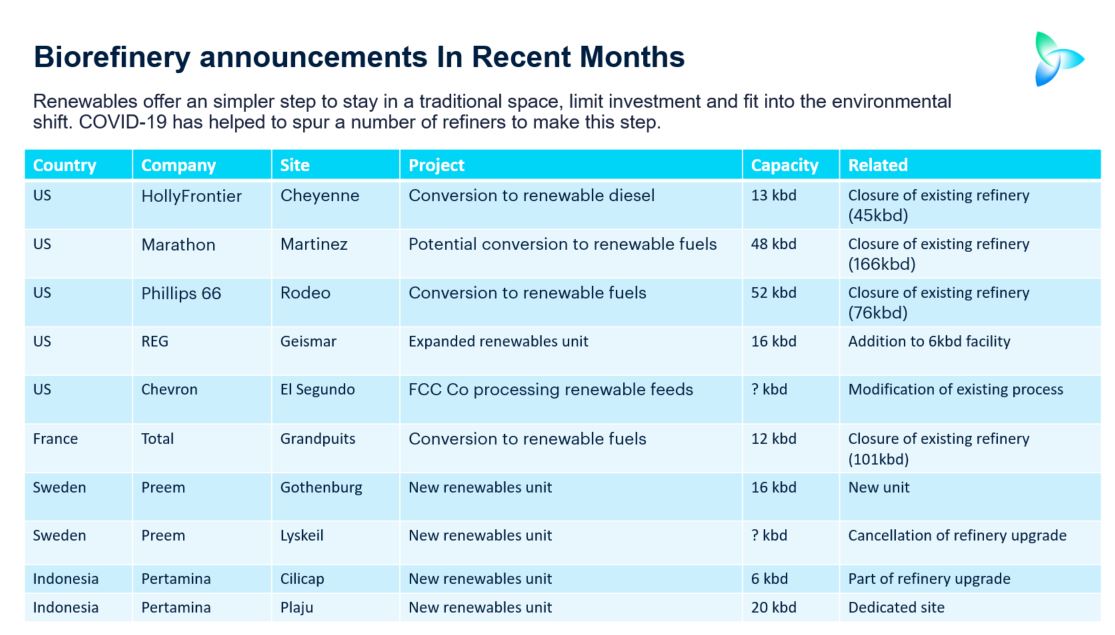 The coronavirus pandemic has accelerated conversions to biorefineries as fuels demand plunged and recovery has been slow, making the economics challenging.

“Renewables are a very easy fit given they can still utilise much of the existing infrastructure as opposed to electrification and hydrogen, which require significant new infrastructure investment in both production and distribution,” he added.

For some petrochemicals producers, the dynamics will change.

“The closures of some refining capacity – in Europe and non-US Gulf Coast – is offset by new capacity built in Asia and the Middle East, meaning sourcing may become more expensive if imported feedstock is required,” said Connolly.

This would impact standalone petrochemicals producers, but integrated refining/petrochemical operations are unlikely to be impacted because of their competitiveness, the consultant noted.

“Greater processing of renewables by refineries will also see opportunities for petrochemicals producers to buy renewable naphtha and LPG feedstocks, enabling them to meet some of their sustainability targets,” said Connolly.

BATTERY GIGAFACTORIES
To engage in the “electric mobility revolution”, Total will ramp up investments in battery technology and EV charging stations.

It sees EV market share growing to 60% or more of the global vehicle fleet by 2050, and grabbing the lion’s share in western Europe.

Total is building out lithium-ion (Li-on) battery capacity in China through its Saft 40/60 joint venture with Tianneng. It also plans to build two EV battery “gigafactories” in France and Germany in a 50/50 JV with automaker PSA/Opel.

The two gigafactories are projected to cost around €5bn over 10 years, providing 48GWh (gigawatt hours) to power 1m EVs, or about 10% of the estimated European market by 2030. 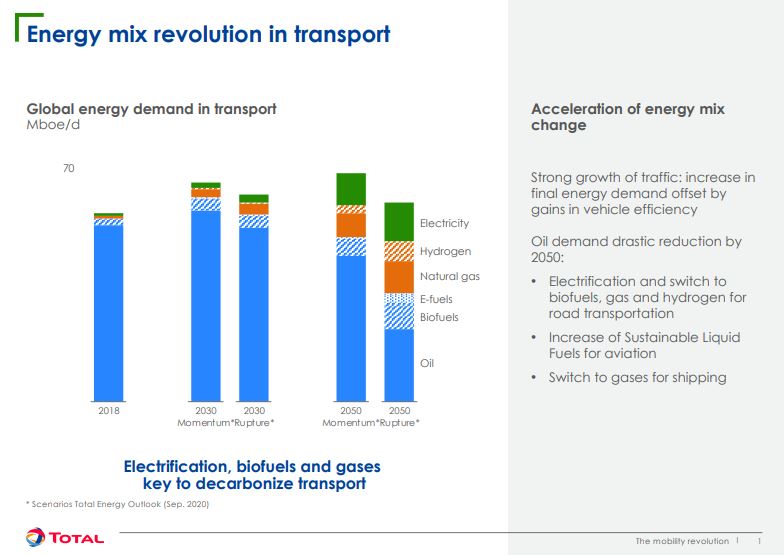 BP is also charging ahead in electric mobility, with a plan to rapidly expand its network.

“Crucially, EVs are no longer the exception – and by 2040 scale-up to around 900m, almost 50% of the car parc (vehicles on the road). More than half of these EVs in 2040 are in the US, EU, UK and China,” said Emma Delaney, executive vice president, customer and products at BP.

“We plan to roll out a mix of rapid and ultra-fast chargers, in advantaged locations and mobility hubs for fleets starting with our four focus regions – the UK, US, Germany and China, which make up for over 60% of the EV car parc by 2030,” said Delaney.

“In Germany, we have plans to roll-out 350KW ultra-fast chargers, which will allow customers 220 miles driving range with just 10 minutes of charging,” she noted.

BP in 2018 acquired Chargemaster, the largest EV charging company in the UK. In 2019, BP and Didi Chuxing formed a joint venture to build out EV charging infrastructure in China.

In September 2020, BP and Uber announced a partnership under which BP will build out a rapid charging network in London to enable Uber’s fleet in the city to go 100% electric by 2025.

Hydrogen also features into Total and BP’s strategies, with the companies planning to build out generation capabilities and fueling stations.

US OIL FAR FROM GREEN STRATEGIC SHIFT
In contrast, big US oil companies have not shown much enthusiasm for a green strategic shift, and nowhere near the magnitude of their European counterparts.

The EU’s European Green Deal, which aims to achieve zero net emissions of greenhouse gases (GHG) by 2050, is certainly giving European oil companies a big push. The EU will seek to enshrine the 2050 target into law, setting the direction for policy initiatives.

No such policy directive exists in the US, but demand for EVs is on the rise, and solar and wind power continue to gain market share in the power generation mix.

It will be interesting to see whether other oil companies enter these markets or cede them to utilities, battery producers and start-ups.

Chevron in May 2019 announced a collaboration with EV charging network operator EVgo to install chargers at select Chevron stations in California.

ExxonMobil is targeting the technical capability to produce 10,000 bbl/day of biofuels, including from algae, by 2025.

US oil companies are dipping their toes into renewables but may need to pivot more quickly to meet future customer demands.

Additional reporting by Will Beacham and Nigel Davis