LONDON (ICIS)–Chemicals container shipping costs have jumped drastically along some routes as the coronavirus pandemic remaps traditional trading patterns and issues at European ports add to delays in the region. 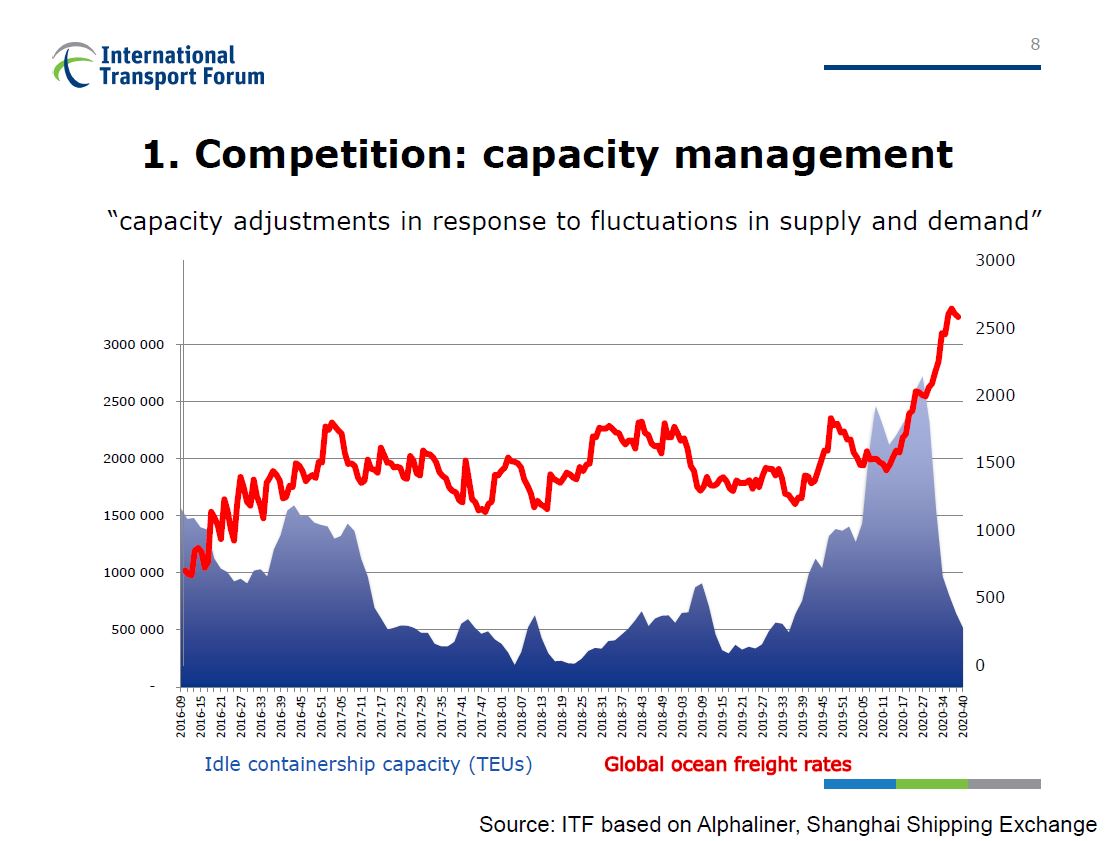 The recovery of multiple key Asian markets from the pandemic relative to the ongoing struggles faced in the west has led to a surge in exports from the region to the rest of the world, with less product going back the other way.

The shift in demand patterns has led to containers returning empty to Asia as demand for exports from the region significantly outstripped demand for imports, increasing costs and lead times for orders.

Shipping lines cut capacity drastically during the first wave of pandemic-related lockdowns, and have failed to boost it sufficiently as demand bounced back.

According to Truong Mellor, senior analyst, specialised products at shipping services group Clarksons: “By June you saw around 12% of global container capacity offline. Following that, they couldn’t restore capacity quickly enough to meet the unexpected Q3 and Q4 recovery, especially out of China where manufacturing activity and containerisable exports have held up pretty well.”

According to Mellor, container availability has been disrupted by too many full containers being stuck in distribution chains west of Suez or in congested ports of entry, with logistics slowed down because of manpower shortages related to coronavirus lockdowns.

CHEMICAL MARKET IMPACT
“Everything is going to China, prices in China are crazy. Also freight costs. Normally freight costs are around $1,500 for a 20ft container. Now you talk about $5,000. It changes every week,” a Europe-based isocyanates producer said:

The extent of demand has led to shortages in Asia, with shipping firms going so far as to send additional empty containers to the region just to alleviate some of the pressure.

“There’s a shortage in Asia,” said another source. “There are extremely high sea freight rates out of Asia. For the time being it’s mainly containers.”

“We had this phenomenon in past years too, where you have shipping companies shipping empty containers to Asia simply to have enough,” it added.

Sources spoke of shipping freight rates for dry cargo rising three- or four-fold, and lead times dragging from six weeks to eight, at a point where demand patterns are extremely difficult to determine due to the trading volatility seen in the market outlook.

BASF CEO Martin Brudermuller noted recently that the company has new order visibility of around two months and almost no indication beyond that.

Lockdown measures in many European countries are creating additional headaches for the shipping sector, Some sources report the use of smaller vessels to cut down on mooring fees but resulting in reduced vessel space, and shipper terms changing fast.

“All the Asian countries are producing and exporting and not importing, because of Covid etcetera. People [in Asia] aren’t importing,” said an Italian trader.

“Shipping lines are saying they can’t respect their contracts. They say pay or we won’t ship,” it added.

DISRUPTION TO PERSIST INTO 2021
Some Asia sources have expressed expectations that freight container tightness in the region is likely to persist until the next Lunar New Year in February 2021.

“The Chinese say it will last until March or April 2021, then the cycle of containers should go back to normal,” said a German trader.

“It looks like it will last at least until the end of February,” said a Spanish trader.

The pandemic has meant product like recycled low density polyethylene (R-LDPE) remaining in storage longer due to additional healthy/safety checks. This adds cost and, more recently, with longer lead times there is demand because people are trying to ship to Asia ahead of the Lunar New Year.

The tightness of the situation has also resulted in some order cancellations, according to a titanium dioxide trader based in Europe that imports from China.

““Vessel space is very tight, prices are increasing extremely [significantly]… we have one container load and the containers were cancelled from the logistics/shipping supplier,“ it said.

PORT CONGESTION
Chemicals supply chains have largely held up during the disruption caused by the pandemic, and distributors have learned lessons from the first spate of European lockdowns to navigate the disruptions seen this time around, according to Peter Newport, CEO of UK-based trade group the Chemical Business Association (CBA).

“The UK chemical supply chain has learned from the first lockdown and is better-positioned and experienced to deal with the second,” he told ICIS recently.

Trade disruptions, bulk orders of medical equipment by governments and geopolitical issues such as the UK’s imminent expected departure from the EU customs union, is also causing congestion at ports and storage issues.

UK chemicals distributors report 90-97.5% of storage capacity currently taken, while the UK Warehouse Association estimates that around 97% of total storage space in the country is taken.

“At [key UK port] Felixstowe… the British government bought a lot of PPE [personal protective equipment], but they didn’t have warehouses so the containers were piled at the ports,” said a trader.

Other key European ports have also had issues, with Rotterdam suffering from delays to arrivals and discharges of shipments due to issues with a new IT system, according to a source.

“There are some problems at the ports,” said an epoxy trader that imports from Asia. “We normally bring our product to Felixstowe and had to move to London Gateway.”

“I spoke to colleagues in Europe, there doesn’t seem to be any space [at] Rotterdam/Antwerp,” it added.

The practicalities of operating during the pandemic are also exacerbating delays at European ports, with additional health and safety checks, furloughing, and social distancing also slowing the speed that product moves through the ports.

“There are still some international shipping delays at port of loading or at UK port of discharge which can lead to significant short-notice storage demand volatility,” Newport added.

Lockdowns are expected to ease in most European countries but, with the virus still circulating at high rates and restrictions expected to be temporarily eased for a spell over the Christmas break, controls on contact and the potential for staff shortages from illness remain high.

The issues mean that, while supply chains are largely continuing to hold and orders continue to be met, logistics issues are likely to continue exacerbating demand opacity, economic volatility and shifts among buyers to more hand to mouth purchasing habits, making for a treacherous landscape for firms through to the new year.

CONTAINER SHIPPING ALLIANCES
Although shipping cartels were outlawed in 2004, shippers are permitted to operate in alliances to optimise use of shipping space.

The OECD’s International Transport Forum claims that links between these consortia mean a large majority of trade routes to and from Europe are operated by one conglomeration of these groups.

It is concerned that too much information may be shared on volumes, costs and pricing.

“The container sector is a lot less fragmented compared to a few years ago. Now you see the top five owners controlling close to 65% of capacity,” added Clarksons’ Mellor.

VIDEO: Asia methanol up on higher cost, restocking ahead of China holiday