LONDON (ICIS)–The UK and EU chemicals sectors face “huge costs” over the coming years in implementing the Brexit trade deal which comes into force on 1 January, according to sector trade groups.

The deal was agreed on 24 December as a looming year-end deadline was approaching. The UK officially left the EU in January but remained as a member of the Single Market under a transition period.

The deal ended years of uncertainty for the UK and EU chemicals industries, whose supply chains are heavily intertwined after more than four decades of UK membership to the now 27-country bloc.

STILL UNCERTAINTY
But the 1,246-page trade pact did not resolve all aspects for future trade within the chemicals and wider manufacturing sectors, and left practically untouched services sectors that make up 80% of the UK’s economy.

A full copy of the “agreement in principle” can be read here; the deal still must be ratified by the UK and EU parliaments; in London, the House of Commons is due to vote on Wednesday (30 December).

The European Parliament will do so in the New Year, with both chambers expected to pass the deal.

The UK’s government warned on Monday about potential “bumpy moments” for companies in all sectors, as well as citizens when trading or travelling in the EU.

“The nature of our new relationship with the EU – outside the Single Market and Customs Union – means that there are practical and procedural changes that businesses and citizens need to get ready for,” cabinet office minister Michael Gove told public broadcaster BBC.

“We know that there will be some disruption as we adjust to new ways of doing business with the EU, so it is vital that we all take the necessary action now.”

Financial services, the UK’s growth engine at the heart of the City of London, are to lose their ‘passporting right’ to operate in the Single Market from 1 January.

The UK’s Chemicals Industries Association (CIA), the main chemicals trade group, said the deal represented “some relief” as potential £1.0bn/year in tariffs on chemicals had been avoided, one of the industry’s main demands.

However, the CIA’s CEO Steve Elliott added that there remained uncertainty on the regulatory framework to come for UK chemicals, potentially still adding costs to operations.

In an annex of barely two pages, the UK and the EU made clear in the official document that, in terms of regulation, all is practically left to be done (see bottom picture).

In the long document, the word chemicals is only mentioned 20 times.

“The Prime Minister [UK’s Boris Johnson] has mentioned chemicals as an industry where we have the potential to do our own thing. With that in mind we need to see, in particular, the extent of regulatory cooperation agreed with regard to the industry’s Reach responsibilities,” said Elliott.

“Failure to secure access to what has been a decade’s worth of investment by UK chemical businesses in data for EU Reach will leave the industry facing a bill of more than £1.0bn in unnecessarily duplicating that work for a new UK regime.”

The opinion was shared by his counterpart at the EU’s trade group Cefic; director general Marco Mensink welcomed the no-tariffs arrangement, but warned the agreement did not provide many details about chemicals regulation.

“The specific chemical annex seems very thin and falls short of securing data access of UK authorities and companies to the Reach database in Helsinki [where the EU’s regulator ECHA headquarters are located]. This means duplication of work and a potential bill of more than €1.0bn to establish the new UK regime,” Mensink told ICIS.

“As the EU rolls out the Chemical Strategy for Sustainability, the UK will have to decide if it follows these new legal developments in the EU from the first day the new trade deal is in place. It is likely the two regulatory regimes will differentiate from the start, which is a concern to all of us.”

The president of Germany’s trade group VCI was quoted on German news outlets on Monday sharing the same concerns.

VCI did not immediately respond to a request for comment; Germany’s chemicals industry is the largest in the EU, with annual sales in 2020 at €186.4bn – including the pharmaceutical sector – and a 464,000-strong workforce.

MIXED MARKETS
UK stock exchanges were closed on Monday due to a public holiday.

Frankfurt’s DAX index was up around 1.50% as manufacturers in the German export-intensive economy welcomed the trade deal.

The UK and the EU have finally avoided the so-called ‘cliff-edge’ on 1 January – a scenario where the UK and EU would have implemented tariff-based rules on World Trade Organization (WHO) terms for trade in goods.

But the CIA’s CEO said a lot of work still needs to be done for the two parties to avoid other trade barriers.

“All our efforts now must be focused on working with the [UK and EU] authorities to deliver a chemicals regulatory regime that is efficient, innovation-friendly and sensitive to international competitiveness,” said Elliott.

“Although this Free Trade Agreement represents a mixed bag for our industry, we shouldn’t underestimate the huge value that a deal brings in terms of certainty … A predictable trading environment with our most important marketplace, coupled with emergence from the Covid-19 pandemic, should make 2021 a year to look forward to.” 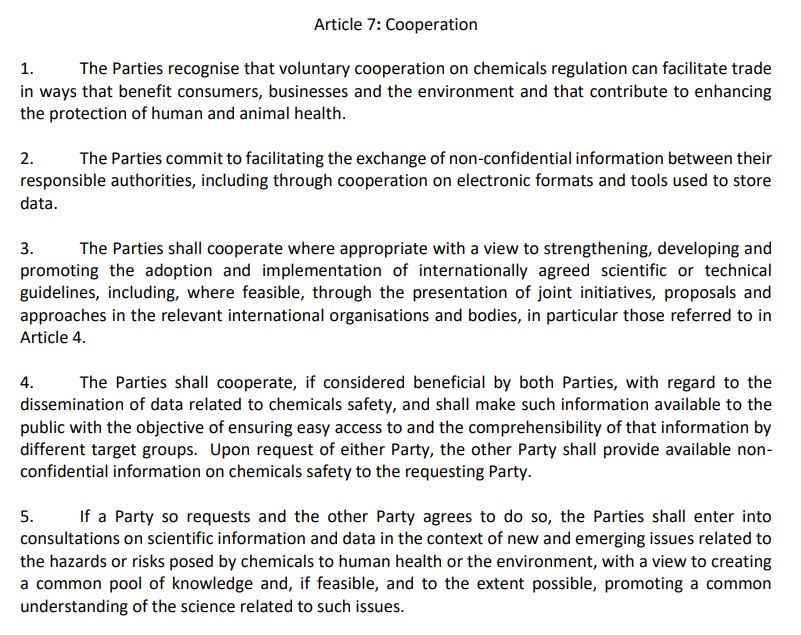