INSIGHT: US GDP growth may exceed China in ’21 but watch housing, auto weakness

NEW YORK (ICIS)–Forecasts for 2021 US GDP growth are ramping up, with the Federal Reserve and economists making big upside revisions as the economy opens up amid accelerating vaccinations and another $1.9trn stimulus package makes its way through the system.

The Fed in mid-March boosted its 2021 GDP growth forecast to a whopping 6.5%, up from 4.2% in December, while projecting near zero interest rates through all of 2023 and continuing $120bn in monthly asset purchases for the time being.

There’s a real chance US GDP growth exceeds that of China, which is targeting over 6% in 2021.

This is sparking inflation concerns, evidenced by the rapid ascent of 10-year Treasury yields from just over 0.5% in August 2020 to over 1.6% today, causing increased volatility in financial markets.

While the Fed expects to hold firm on rates through 2023, in the latest NABE (National Association for Business Economics) Policy Survey, nearly half the panellists expect the Fed to hike rates in 2022 while a majority sees elevated inflation risks.

The severe winter storm and freeze in February will have a lasting impact throughout 2021, leading to higher chemicals and polymers prices amid an extended period of tightness. Rising prices of other basic materials such as crude oil, copper and lumber would only add to overall inflation.

Fuelling the fire is unprecedented levels of fiscal stimulus. The passage of the $1.9trn stimulus plan in March comes on top of the $900bn stimulus package signed in December.

Coming up next is yet another $3trn in proposed stimulus that may be separated into two bills – one focused on infrastructure and the other on social programmes.

Passage of these plans is less certain and could take much longer as it would require bipartisan support rather than a simple majority in Congress. In today’s political environment, a deal on infrastructure is much more likely than on social programmes.

If it is anything similar to the $2trn infrastructure plan announced during the campaign, which includes major investment in transportation including automotive, as well as housing and construction, this has the potential to provide a significant boost to chemicals demand. GDP estimates for 2021 and 2022 would rise further.

VACCINE ROLLOUT LIFTS ECONOMIC FORECASTS
And of course there’s the accelerating vaccine rollout in the US, along with much of the rest of the world, although at varying degrees.

Moody’s Investors Service changed its global chemical industry outlook to positive from stable as it expects vaccine rollouts will overcome initial teething problems and lead to more consistent demand and earnings before interest, tax, depreciation and amortisation (EBITDA) growth across most of the sector.

The credit ratings agency expects average EBITDA growth of 16% for its global chemical universe under coverage in 2021.

“Increasing immunisation rates and a gradual phasing out of lockdowns will result in a resumption of more stable demand growth leading to a normalisation of order patterns in terms of size and frequency,” said Moody’s analysts in a report.

Economists’ consensus estimates for 2021 US GDP growth have been rising, with the latest at 5.7% – up from 4.9% in February, 4.2% in January and 4.0% in December. Look for these estimates to rise further, getting closer to the Fed’s 6.5% forecast. Morgan Stanley recently raised its GDP estimate to 8.1%.

US RETAIL SALES HIT A BUMP
Meanwhile, US retail sales in February fell 3.0% following an upwardly revised 7.6% gain in January but were up 6.3% year-on-year. Notable year-on-year gains were in ecommerce (+25.9%), building materials and garden equipment (+14.2%), motor vehicles and parts (+9.2%), and furniture and home furnishings (+8.9%).

The US unemployment rate in February fell 0.1 percentage point to 6.2%, continuing its steady downtrend.

The American Chemistry Council’s Chemical Activity Barometer (CAB) – the trade group’s leading indicator for US industrial production – rose 1.0% in February on a three-month moving average basis, marking the 10th consecutive month of gains. The index is up 1.3% year-on-year.

HOUSING AND AUTO ROLL OVER
Two key sectors that bear watching are housing and automobiles – both of which are now rolling over after several months of strong gains. These have been major drivers of chemicals demand through the recovery.

US housing starts dropped 10.3% in February to a seasonally adjusted annual rate (SAAR) of 1.42m following a 5.1% decline in January, and are now 9.3% below year-ago levels. Permits also fell 10.8% in February. Higher mortgage rates and lumber costs continue to be headwinds for the sector. 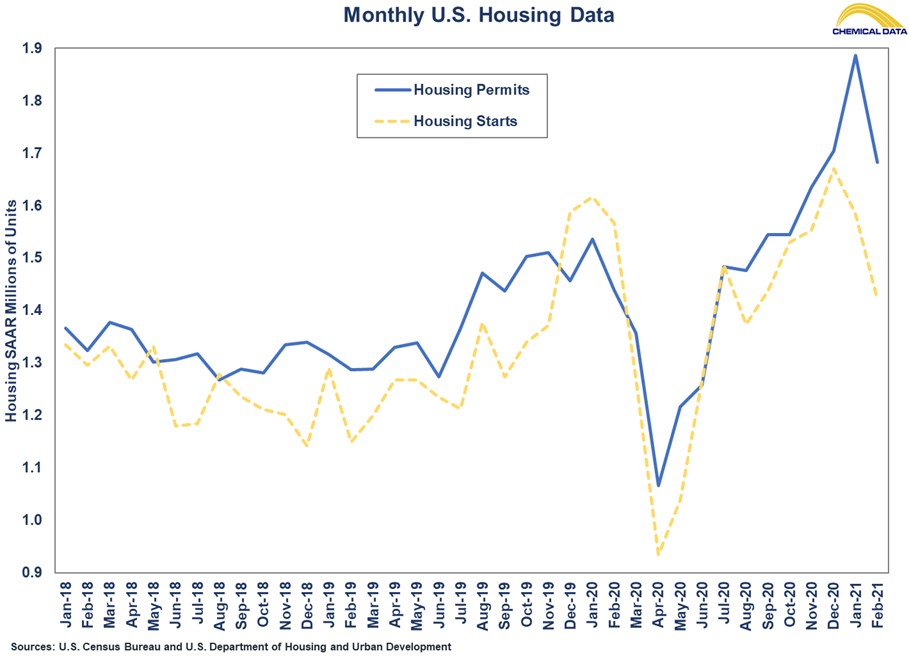 US February light vehicle sales fell 5.7% to a SAAR of 15.7m units, which was also down 6.6% from year-ago levels. The semiconductor shortage is now being compounded by limited supplies of plastics and foam arising from the US polar storm. A number of automakers are halting or further cutting US production in March.

It bears watching whether this weakness in two key chemicals end markets will be transitory or become headwinds to underlying demand.