This should continue to lengthen supply of IPA in the US because most buyers purchase domestically.

While IPA did not endure the tightness of markets such as butyl acetate (butac) or monopropylene glycol (MPG) after winter storm Uri in mid-February, there were production issues at two Gulf producers  – LyondellBasell and Monument Chemical – which declared force majeure in the immediate aftermath of the storm.

Now, according to a customer letter, as of early April, LyondellBasell is increasing its allocation volumes to 100% for customers. Allocations will be determined by a six-month average from August 2020 to January 2021.

A representative for LyondellBasell did not respond to a request for comment.

IMPORTS DOWN IN FEBRUARY
Imports make up a small segment of the US market, especially as volumes from China have collapsed since last summer. More than 2,000 tonnes arrived from China in May and June 2020, but fewer than 50 tonnes has been recorded in each of the last three months.

Despite a noticeable increase in Taiwanese material in the last month, other leading countries have also reported falling IPA exports to the US. 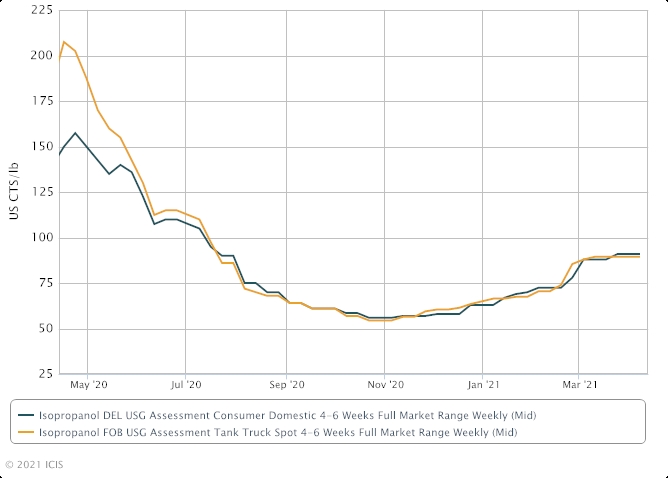