HOUSTON (ICIS)–Hurricane Ian gained strength during the day on Tuesday, leading more oil and gas producers to evacuate offshore drilling platforms in the US Gulf as the storm maintained its path toward Tampa, Florida. 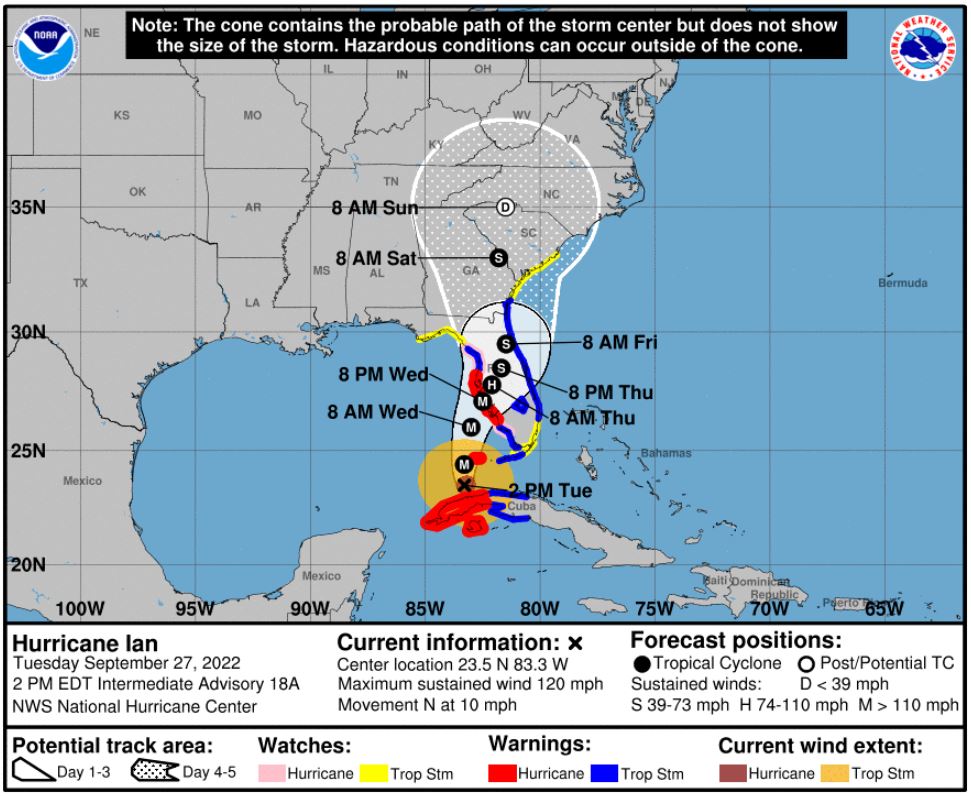 The Bureau of Safety and Environmental Enforcement (BSEE) said that as of mid-day personnel have been evacuated from 12 production platforms, which represent about 2.3% of the 521 manned platforms in the Gulf.

BSEE said personnel have been removed from two non-dynamically positioned (non-DP) rigs, and that four DP rigs have moved off location and out of the storm’s path as a precaution.

From operator reports, BSEE estimates that about 11% of the current oil production and 8.56% of the natural gas production in the US Gulf has been shut in.

The Port of Tampa closed on Tuesday morning, according to GAC Hot Port News.

As of mid-afternoon on Tuesday, Ian was about 265 miles (430km) south of Sarasota, Florida, with maximum sustained winds of 120 miles/hour, making it a Category 3 storm based on the Saffir-Simpson scale.

The US fertilizer industry is watching the tropical threats closely as Tampa is a key centre with both trading, shipping and production operations in the area.

Major domestic producers, including both Yara and Mosaic, have facilities in the surrounding region.

“We continue monitoring weather updates while completing preparations at our phosphate mining and production facilities in Florida as well as sites in Louisiana,” a Mosaic spokesperson said. “Employees at our headquarters in downtown Tampa and at other locations in Florida are working remotely so they can be safe and focus on their own personal preparation. We’re also communicating with our customers globally so they’re aware of any impact to services.”

Ascend Performance Materials has a plant in Pensacola, Florida, that produces nylon 6,6 as well as feedstocks hexamethylene diamine (HMD) and adipic acid, according to the ICIS Supply and Demand Database.

Pensacola is located on the far western edge of the state and is not within the projected path of the storm.

Huntsman International produces maleic anhydride in Pensacola, and Reichhold Chemicals has production sites in Pensacola and in Jacksonville, Florida.

“Our Pensacola site is operating normally at the current time, but we are watching the storm and are prepared to take necessary precautions if it approaches the site,” according to a Huntsman company statement.

Jacksonville is on the Atlantic Coast side of Florida and is within the projected path. However, the storm could lose intensity once it makes landfall.

Hexion produces epoxy resins and phenolic resins in Lakeland, Florida, according to the database.

Lakeland is about 35 miles east of Tampa.

Railroads CSX and Florida East Coast Railway (FECR) operate in the region, but as of mid-afternoon neither had announced any service updates.

The railroads did not immediately respond to requests for comments.

US Senate adopts resolution to avert strike from rail workers

INSIGHT: Chlorum sees US as next market for its small chlor-alkali plants