SINGAPORE (ICIS)–China’s jet fuel export will not return to pre-pandemic levels this year as global air travel is expected to stay low with border restrictions still in place in most countries.

China’s average annual jet fuel export was around 16m in 2018 and 2019, before plunging to less than 10m tonnes last year when the pandemic hit.

Global international air traffic in March 2021 was 87.8% below the 2019 level, according to the International Air Transport Association (IATA).

The international air travel market in Asia, in particular, has been the worst performing, due to its strict border control measures (see chart 1).

In the first quarter of this year, Asia international travel demand in terms of revenue passenger kilometres (RPK) was only around 5% of the 2019 level over the same period, according to IATA. 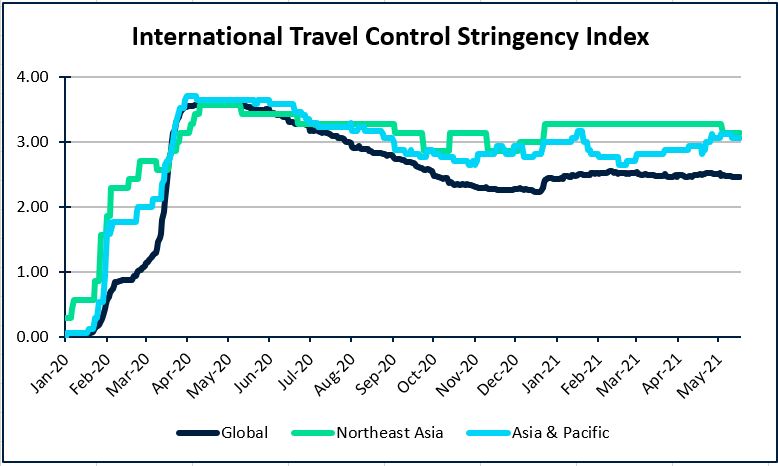 Asia accounts for more than 70% of China’s jet fuel exports, and jet fuel demand in Asia excluding China has remained in the doldrums.

In the first quarter of this year, demand in several key markets in Asia was down by 35%-77% compared with the same period in 2019. 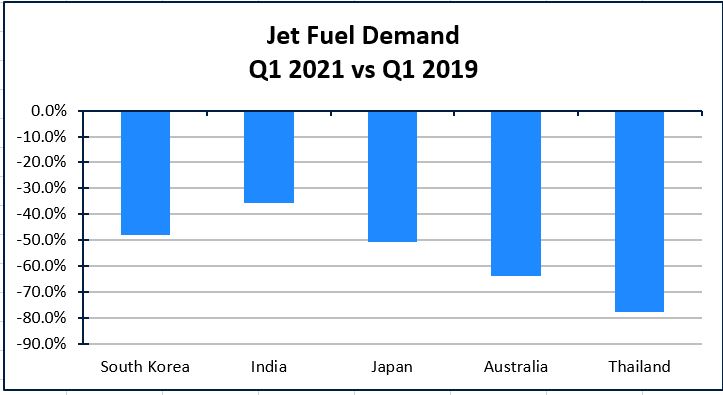 Over the same period, China’s jet fuel exports fell 64% compared with 2019, according to China General Administration of Customs.

Asia’s jet fuel demand recovery is likely to remain slow for the rest of the year, as the recent emergence of new and more transmissible variants of COVID-19 indicate that any recovery to normalcy could be quickly set back.

While vaccination has raised hopes that air travel demand will improve as borders reopen, its uneven roll out across countries means the demand recovery will be slow.

At this rate of vaccination, it could take 4-5 years for Asia to cover 75% of its population. Hence air travel demand in Asia, excluding China, is unlikely to return to pre-pandemic levels before 2024.

RECOVERING DOMESTIC AIR TRAVEL DRIVES REFINERIES TO INCREASE PRODUCTION
There is some relief though for Chinese refiners as domestic air travel in China is coming back strongly and margins in jet fuel production are recovering.

According to the Civil Aviation Administration of China (CAAC), the domestic air travel in terms of revenue passenger-kilometres (RPK) in March rose by 1.6% compared with the same period in 2019, following two successive months of subdued demand due to renewed restriction measures.

According to China’s National Development and Reform Commission (NDRC), apparent demand for jet fuel was up 24.6% year on year in Q1 2021, but was about 33% below the 2019 level.

CHINA’S REFINERY JET FUEL EXPORT FACES GREAT PRESSURE
China’s refining sector will face more supply pressure in the second half of the year as the domestic refinery maintenance season is due to end in June.

With jet fuel demand recovery in Asia set to be a long haul, China’s refiners will come under increasing supply pressure and margins will be squeezeed in the next two years when new and expanded refineries come on stream (see chart 3). 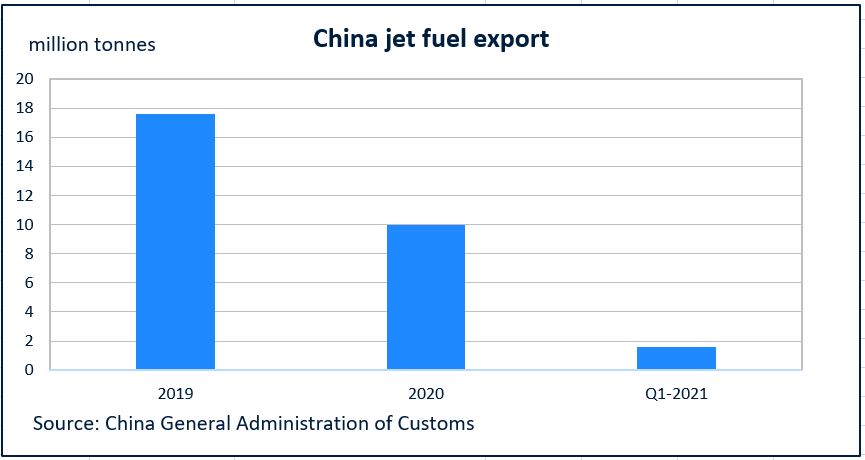