BARCELONA (ICIS)–Petrochemicals producers which are non-integrated or attached to older, smaller oil refineries face an uncertain future as new, efficient mega-refineries come onstream in Asia and the Middle East which will accelerate the closure of other facilities.

From 2021-2025 eight new mega-refineries are due to come onstream which, together with major expansions at existing sites in India and China, will add 4.2m bbl/day to net global capacity which includes closures, according to data from the ICIS Supply & Demand database. 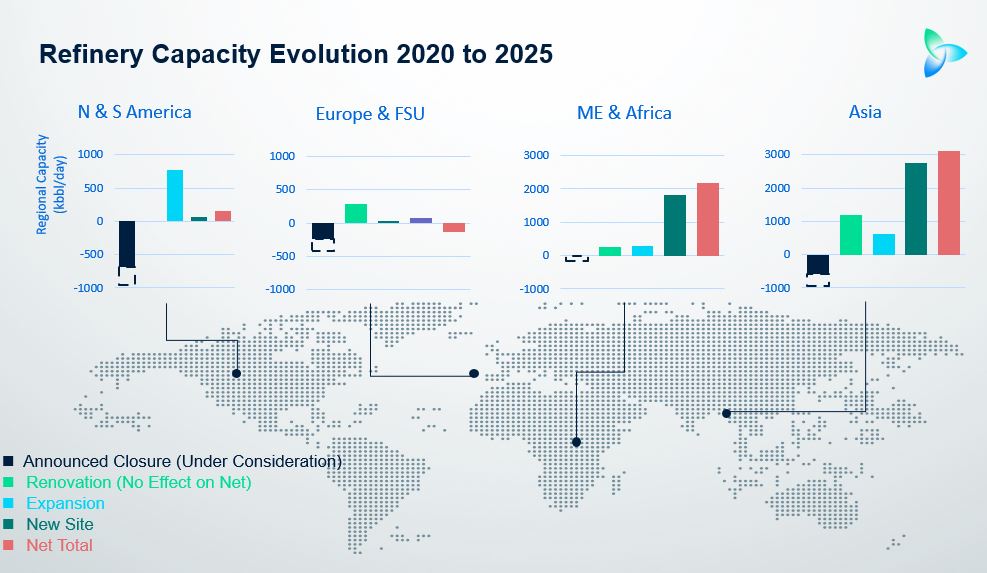 They will come onstream at a time when demand for output from oil refineries is still recovering from the devastating impact of the pandemic on aviation and road transport. Indeed demand may never fully recover to pre-pandemic levels as low carbon transport and energy replace fossil fuels.

Since the pandemic began, refinery closures have already been in full swing. Take Europe as an example. Here, in the last 12 months alone there have been around 500,000 bbl/day of permanent closures as demand for transport fuels collapsed. At least five more refineries in Europe are still idled and face an uncertain future.

Europe lost 1.5m bbl/day of production in 2020, but only one third of that is forecast to be recovered by 2023. From then on, a structural decline is forecast according to the ICIS Supply & Demand database.

ICIS oil refining analyst, Michael Connolly said: “These new, efficient capacities in the Middle East and Asia will put pressure on older refineries in places like Europe and the US where we expect to see more closures as the new refineries come onstream.”

These new mega-refineries are highly integrated to olefins and aromatics and are focussed on making petrochemicals with very high conversion rates to naphtha, he added.

Mega-refineries have the capacity to process at least 200,000 bbl/day compared to a global average of 122,000 bbl/day

The big oil majors, particularly in Europe, have embraced a  lower carbon future. The likes of Total and Shell have recently updated their strategies to shift away from oil and gas exploration and refining as they aim to become providers of energy rather than oil companies.

This means more oil refinery closures must be in the pipeline, with sites being either abandoned or converted into low carbon energy and chemical hubs.

PETROCHEMICAL FEEDSTOCK IMPACT
Petrochemical producers which are not attached to larger, more modern, oil refineries may find themselves starved of feedstocks if adjacent refineries close, and be forced to buy naphtha and other petrochemical feedstocks on the merchant market, with added logistics costs.

According to Connolly: “It will be a challenging time for European and US petrochemicals – the stronger parts of the refining fleet tend to be integrated to petrochemicals. But if you are a standalone cracker there will be more pressure on naphtha markets and more requirements for imports of naphtha, with added freight costs and competition from other regions.”

With net refining capacity in Europe and the Americas forecast to be flat or in decline, it is in these regions where chemical producers are more likely to be affected by feedstock shortages.  However there have also been refinery closures in Asia and Australasia.

Asia and the Middle East will see significant refinery capacity additions and oversupply, but face the logistical challenges of exporting to other regions. Global supply chains have been experiencing severe disruption since the second half of 2020, and this is likely to persist until the vaccination programme has brought the pandemic under control.

Analysis by ICIS consultant John Richardson highlights regions are effectively being cut off from each other by supply chain problems. This has led to unprecedented price differentials between regions.

He said: “The container shipping market is finely-balanced at the best of times. We may have to be prepared for sporadic disruption for a long time, depending on how the shipping companies adjust to the new reality of almost constant disruption.”

CAN RECYCLING SOLVE THE PROBLEM?
Some commentators suggest that there will be a rapid rise in the recycling of polymers in the next few years. In that case, chemical producers would be able to use that new source of feedstock to replace much of the lost virgin feedstocks.

However considerable technological and supply chain challenges remain. Recycled polyethylene (PE) as a percentage of global PE production is forecast to rise from 3.0% in 2020 to 5.5% in 2030 and to 8.3% by 2040, according to the ICIS Supply & Demand database. 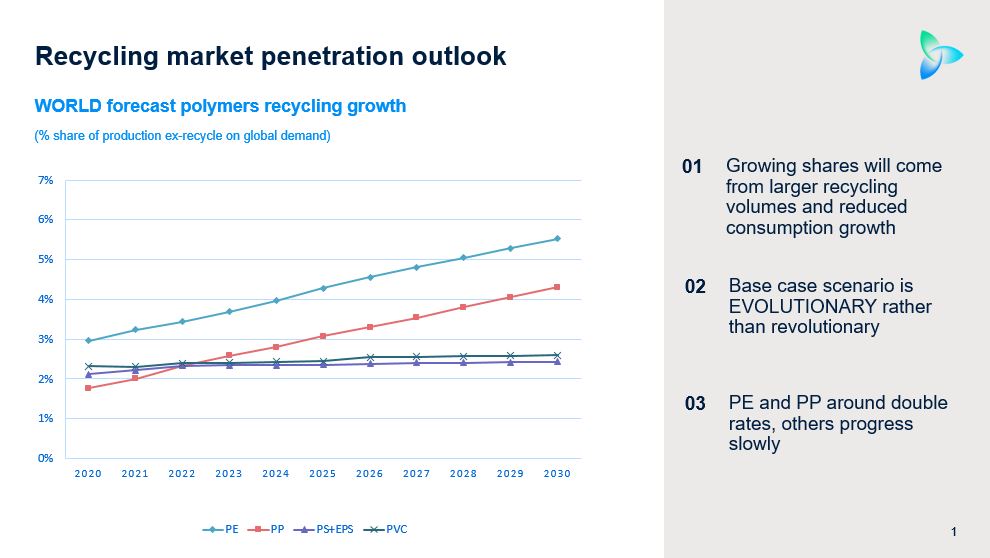 ICIS analyst Ajay Parmar said: “When you have the world’s two largest economies putting billions and even trillions of dollars into a green recovery, we can see that there will be a long-term impact from the drive to low carbon in refining and petrochemicals.

Insight article by Will Beacham.

Listen to a podcast interview with Michael, John and Ajay.