LONDON (ICIS)–Water levels on the River Rhine continue a slow return to normality and more than 25km of a prior closure could reopen to barge shipping later in the day, the German federal waterways authority WSV said to ICIS on Wednesday.

A 76km-stretch on the Rhine has been closed since Monday (19 July) after heavy flooding rose the key petrochemicals waterway’s levels to over the legal maximum for shipping.

“Rhine water levels are on their way back to normality, but it takes some time. The gauges Speyer and Maxau are still exceeding the maximum shipping water level and thus the stretches shut on Monday remain shut,” said a spokesperson for the WSV.

“Speyer – representative for Rhine kilometres 384 to 410,5 – may reopen today [Wednesday] late in the evening.”

Water levels at Maxau remain nearly one metre higher than allowed for shipping, at 750cm; according to German regulations, shipping must be stopped when water levels exceed 660cm.

–
GENERALISED DISRUPTION
While Rhine closures have not taken place in the heavily industrialised areas of Mannheim, Ludwigshafen, Cologne or Leverkusen, the knock-on effect from the closures occurred further up (south) the river have caused mayhem in petrochemicals logistics.

In a letter to customers notifying them hefty price increases for shipments due to the disruption, Swiss chemicals logistics provider Bertschi said on Monday the disruption would last, at least, until 23 July.

Analysts have said most companies along the Rhine have experienced logistical knock-on effects, be it large or small.

Chemicals majors BASF, Covestro, Evonik or LANXESS would be among those experiencing difficulties, according to a note to analysts from Germany’s investment bank Baader Bank.

OFFICIAL COMPANY LINES: WHO SAID DISRUPTION?
BASF, which operates the large-scale petrochemicals complex at Ludwigshafen, would not respond to specifics this week, Although several sources did tell ICIS it was having problems in the styrene chain.

On Wednesday, a spokesperson for BASF said it would not comment on specifics about styrene.

LANXESS said to ICIS that it had not experienced any impact on logistics from the floods but “of course we are keeping a close eye” on the Rhine’s water levels.

“We are prepared for possible restrictions in shipping traffic. We have implemented a good risk management and flexible logistics management and are able to shift more goods to rail and/or road, if necessary,” said a spokesperson at LANXESS.

Covestro and Evonik had not responded to a request for comment at the time of writing.

The truth about how much the disruption has cost producers is likely to come out when the companies, at least those publicly listed on the stock exchange, publish their financials for the third quarter.

Logistics costs were already high prior to Germany’s floods, which are set to increase them further. 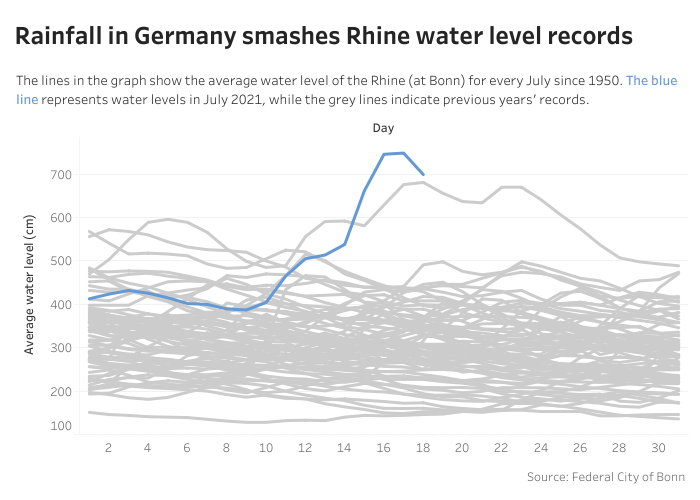 US EPR adoption to drive up plastic recycling rates over time