Update: This article was updated on 6 August to reflect new hydrogen production capacity figures for HyNet

LONDON (ICIS)–The UK government has announced five potential candidates for phase one of its cluster sequencing programme, which combined would support 9.7GW of low-carbon hydrogen production by 2030, ICIS analysis showed.

The programme aims to have two active carbon capture, storage and utilisation (CCUS) projects online by the mid-2020s, with an additional two online by 2030. The programme is split into two tracks. 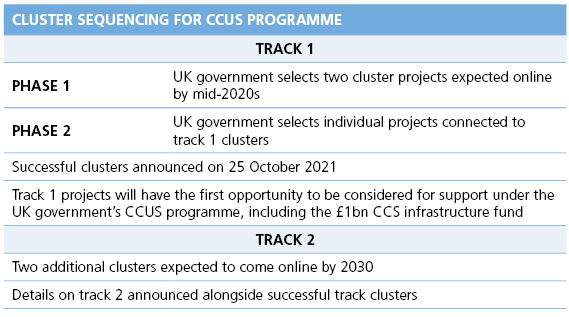 The project aims to have T&S operational by 2025, offering transport of emissions by vessel for locations not easily accessible by pipeline.

The hydrogen capacity is expected to ramp up in three phases of 0.6GW increments, with natural gas supply coming from the UK national transmission system.

The power demand for the blue hydrogen capacity will be met with supply from a newly built power plant with CCS, although Neptune Energy told ICIS there was no confirmation on capacity of the plant at this point.

Both power generation and hydrogen production at scale is expected to be in place by 2027.

Located in the northwest of the UK, the HyNet project will develop 3.8GW of blue hydrogen capacity by 2030, delivering 80% of the UK 5GW target, lead developers Progressive Energy told ICIS.

The project will support decarbonisation of industry, flexible power generation and transport in addition to blending hydrogen into the local gas distribution network.  The carbon capture and storage system will underpin hydrogen production and will also be a key enabler for hard-to-decarbonise industries such as cement and ammonia production.

The ECC is led by the Northern Endurance Partnership (NEP) which will provide the common offshore T&S infrastructure to transport carbon from industrial emitters in Teesside and the Humber. The NEP is made up of numerous energy participants, including BP, Equinor, Eni, National Grid, Shell and Total.

If the ECC project gains track one funding from BEIS, construction would begin in 2023, with completion and first carbon injection around mid-2026.

By 2030, the ECC aims to have capacity to store up to 27mtpa of carbon, split between 10mtpa in Teesside and 17mtpa in Humber, accounting for nearly 50% of UK industrial carbon emissions.

Within the Humber and Teesside regions are two large-scale blue hydrogen capacity projects, the 0.6GW H2H Saltend project, led by oil and gas major Equinor, and the 1GW H2Teesside project led by BP. As well as H2H Saltend, Equinor is working on a further 1.2GW of blue hydrogen capacity in the Humber region to supply its joint venture with SSE Thermal, the Keady Hydrogen plant.

The projects led by Equinor and BP are due to come online after ECC is expected to commence T&S operations, but will utilise the NEP’s infrastructure to capture carbon from the blue hydrogen production process.

Harbour Energy is the sole developer of the VNZ T&S project and is the VNZ Cluster lead.

The VNZ Cluster seeks to decarbonise the primary emitters at the Immingham SuperPlace through T&S in the Viking Area depleted gas fields, Harbour told ICIS.

The VNZ T&S project aims for first injection of captured emissions by 2027, with an ambition to store up to 11 million tonnes of carbon by the end of 2029. Thereafter, the storage capacity is expected to ramp up to greater than 12mtpa by 2034.

The VNZ Cluster contains a diverse range of primary emitter capture projects including VPI, Phillips 66 (Humber Zero), PRAX and EPUKI, with the capacity to add more.

The VNZ T&S project also has the capacity to store carbon that would be created by several of the Humber region emitters’ blue-hydrogen aspirations.

The Scottish Cluster is a T&S solution led by a cross-sectoral group of Scottish industrial emitters and the Acorn CCS and hydrogen project partners.

The cluster aims for construction between 2023-2025, with first carbon storage expected from 2025. Up to 25.5mt of carbon emissions are projected to be stored by 2030, when capture rates are forecast to reach 6.7mtpa.

Nine large-scale emitters are expected to implement CCS between 2025-2030, eight of which are forecast to have CCS in place by 2027.

The cluster project is expected to support 1.5GW of low-carbon power generation utilising CCS, as well as blue hydrogen production capacity up to 1.3GW by 2030.