With a capacity of around 87,000 cubic metres (cbm) each, the vessels could carry about 58,000 tonnes of ammonia – almost 50% more than the capacity of the largest tankers operating currently.

Namura Shipbuilding will construct the two vessels at its Imari Shipyard, under a technical tie-up with Mitsubishi Shipbuilding Co. Ltd. Financial details were not disclosed.

“The vessels, which can also run on LPG fuel, are slated for delivery in succession after 2023 [… and] are designed to maximise fuel efficiency,” MOL said in a news release.

“Ammonia is drawing attention as a next-generation clean fuel that does not emit carbon dioxide when burned, and as ‘hydrogen carrier’ that can be used to transport hydrogen.

“The newly-ordered vessels are also designed to transport ammonia, and are presently the world’s largest-scale ammonia carriers.

“Furthermore, the vessels will be built with an eye toward conversion to ammonia fuelled in the future because LPG and ammonia fuels have similar characteristics.”

A fertilizer in its own right, a key component of nitrogen and phosphate fertilizers and utilised in chemical products like caprolactam, ammonia is widely traded.

Around 1.6m tonnes/month of ammonia is moved by marine vessel, with about 60 tankers on the water at any one time, ranging in capacity from 4,000 tonnes to 40,000 tonnes. 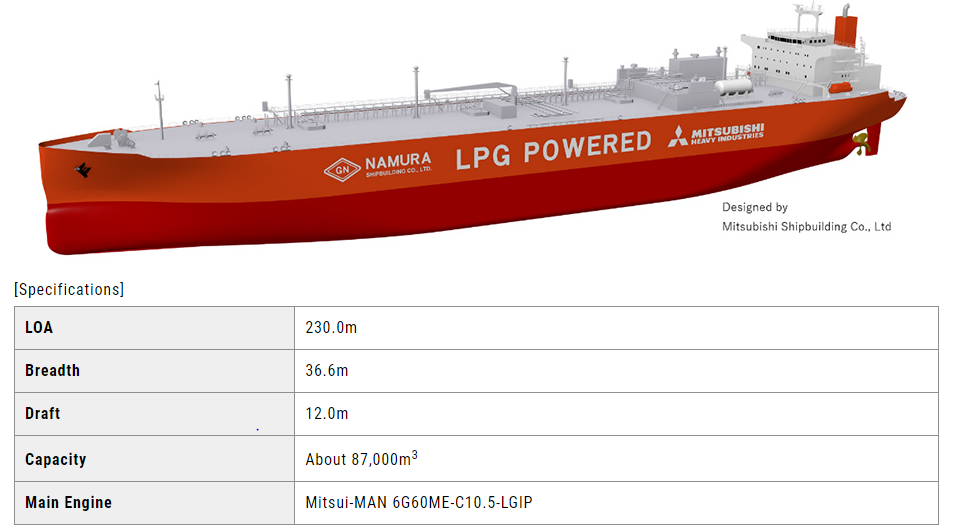 Illustration of one of MOL’s new VLCC to transport LPG and/or ammonia. Image courtesy of MOL