US plants shut as Hurricane Ida heads toward Louisiana

HOUSTON (ICIS)–Several US chemical plants and refineries are shutting down as a precautionary measure before Hurricane Ida hits Louisiana on Sunday.

BASF is idling its Geismar, North Geismar and Vidalia sites by noon on Sunday, it said on Saturday. The Geismar site produces butanediol (BDO), ethylene oxide (EO), isocyanates, polyols and other chemicals.

ExxonMobil said on Saturday it is taking precautions to protect its Baton Rouge facilities. “For example, we are working to protect critical equipment, structures and supplies, including our docks and fuel terminal facilities in the Baton Rouge area.”

Phillips 66 began shutting down its Alliance refinery in Belle Chasse on Friday.

Other chemical sites such as Dow, NOVA Chemical and Huntsman said on Friday they are continuing to monitor the storm.

Sasol activated inclement weather plans at US Gulf Coast locations, but operations at Lake Charles were normal as of Friday evening.

CITGO’s refinery in Lake Charles continues to operate at normal rates, it said on Saturday. “The current path of Hurricane Ida is tracking east of Lake Charles, La; however, the CITGO Lake Charles refinery is implementing its Hurricane Preparedness Plan, which includes safely securing the refinery in preparation for the oncoming storm.”

The Louisiana region is home to petrochemical plants and refineries. Many companies are still recovering from disruptions caused by Winter Storm Uri last February and the active 2020 hurricane season. 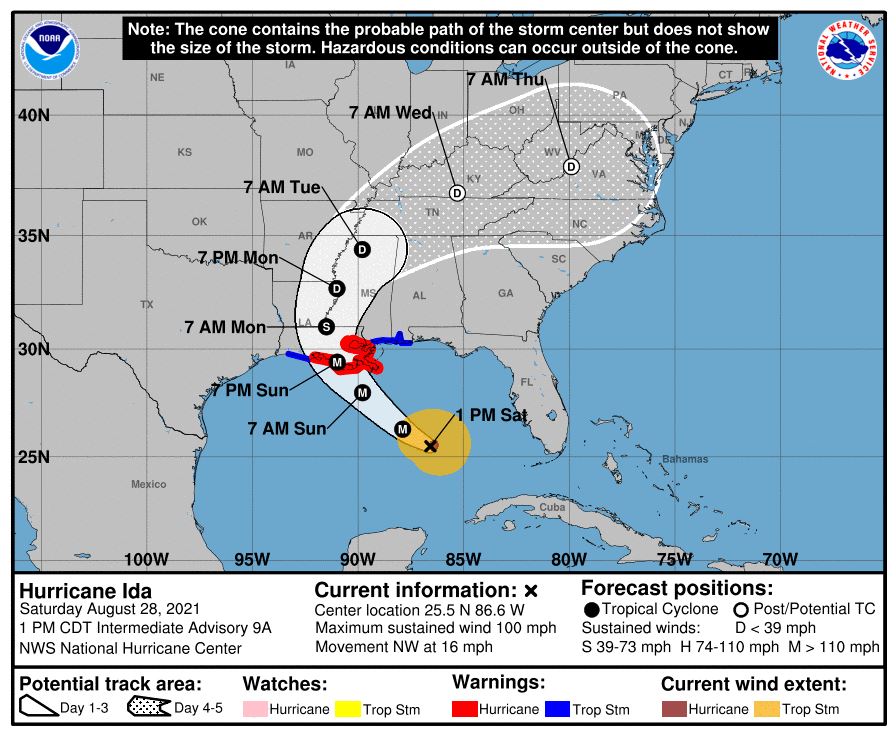 At 18:00 GMT on Saturday, Ida was about 290 miles (470km) southeast of the mouth of the Mississippi River, moving northwest at about 16 miles/hour (26km/hour), according to the National Hurricane Center.

Ida is expected to make US landfall along the coast of Louisiana on Sunday and move inland over Louisiana and western Mississippi on Monday.

So far, oil and gas operators have evacuated 279 platforms, nearly 50% in the Gulf of Mexico, the US Bureau of Safety and Environmental Enforcement (BSEE) said on Saturday.

Producers have shut in nearly 91% of oil production and nearly 85% of gas production.

Shell, BP and Chevron began shutting in oil production and evacuating personal from its platforms on Friday.

The Gulf federal offshore oil production accounts for 17% of total US crude output, according to the Energy Information Agency (EIA).

Ports of New Orleans, Plaquemines, South Louisiana and St Bernard were among those that closed on Saturday, according to the US Coast Guard. Other ports on the path of Ida remain open but with restrictions.

The following are port conditions. Whisky is when tropical or hurricane force storm is predicted to make landfall within 72 hours, X-Ray within 48, Yankee within 24 and Zulu within 12.