HOUSTON (ICIS)–Container freight rates continue to rise, and despite efforts by global shipping competition agencies and a commitment to freeze rates by some carriers, some players think that prices are unlikely to return to normal until the middle of next year, if ever.

Robert Khachatryan, founder and COO of shipping forwarder Freight Right Global Logistics, said this week that he still thinks the market will not start to settle until the middle of 2022.

“Things are actually getting worse,” he said, noting that container rates from China and east Asia to the US continue to top $20,000 per 40-foot container. 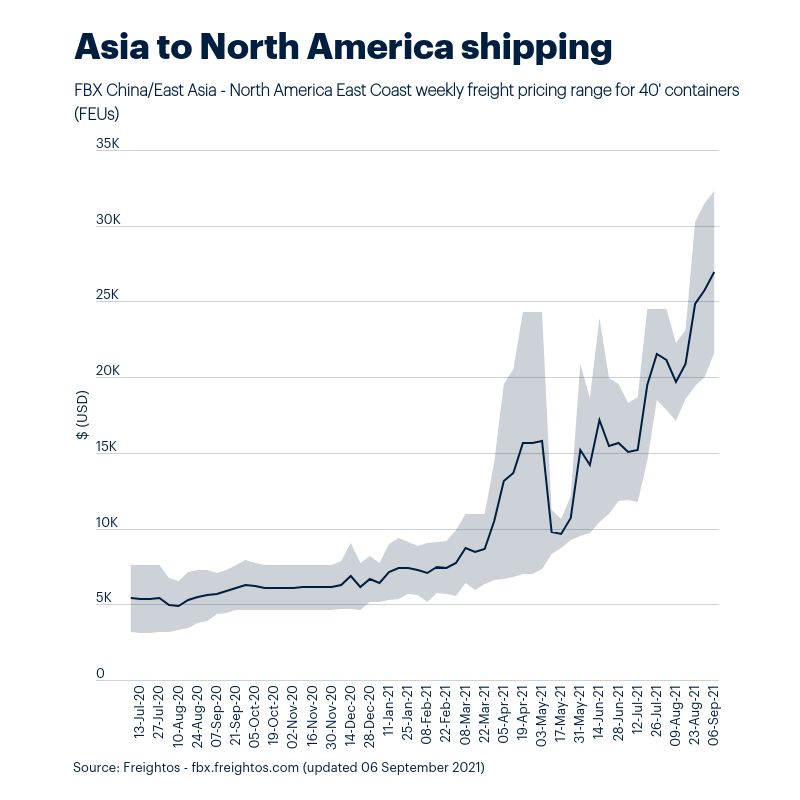 For context, the cost of a container for the same route was about $4,500 this time last year.

Khachatryan said he expects rates to continue rising, with the US East Coast continuing to see slightly higher rates than the West Coast, and that year-ago rates could become the new floor.

SOARING RATES
While most chemicals are liquids and shipped in tankers, polymers such as polyethylene (PE) and polypropylene (PP) are shipped in pellets and moved by container ships.

Container ships also carry a wider scope of cargo, including consumer products like electrical appliances and automobiles. However, demand for that space has also increased as economies reopened after lockdown measures were lifted.

The spread of the coronavirus pandemic – and the lockdown measures introduced to help mitigate it – led to a surge in demand for goods.

Consumers who were able to work from home found themselves with extra money as they were limited in how they could spend it.

This led to the surge in rates for containers out of Asia, with some currently more than four times higher than they were in January.

Khachatryan said the news is welcome and likely to ease current tensions, but said it was not a final solution.

“It definitely helps, but in the spot market you have to keep in mind a lot of these containers are held by forwarders and resellers, and they are not going to stop with the hikes,” he said.

As a freight forwarder, Khachatryan said he has seen his company’s revenues skyrocket, but he believes that rates have now reached a point where they are not sustainable.

“I think they are realising that at this rate they are making changes to the industry that may not be reversible,” he said. “In the short term they make a lot of money, but in the long term nobody can predict what this is going to do to the global economy, logistics and supply chains in general.”

INTERNATIONAL SHIPPING COMPETITION AGENCIES
The current situation was the main topic of discussion when shipping competition agencies from the US, Europe and China met virtually last week.

The fifth biennial meeting of the Global Regulatory Summit gave key competition authorities responsible for the oversight of the container shipping industry the opportunity to share information about what their respective monitoring and enforcement regimes are observing in the marketplace and comparing conclusions about carrier behaviour, US Federal Maritime Commission Chairman Daniel Maffei said.

“The performance of ocean carriers in meeting historic demand for their services and the unusually high costs to move ocean containers are of interest and concern to regulators, legislators and the public globally,” he added.

Although efforts by the regulators are a positive sign, Khachatryan thinks they will not necessarily produce results.

“It is really hard for them to regulate – there are too many hands in the pie,” he said.

OUTLOOK
It sounds crazy to say, but the market could actually benefit from reduced demand for goods in the US, Khachatryan said.

“Unfortunately, we need demand for goods to curtail a little bit for these rates to stabilise,” he said.

However, with the US in the middle of the peak season ahead of the Christmas shopping period, demand is likely to remain robust.

Freightos said in its weekly update that the rebound in US consumer spending on services that started this summer and is seen as key to normalising ocean demand after the peak season has weakened because the Delta variant continues to spread.

And with peak season in full swing, the latest estimates from the National Retail Federation had US August ocean imports 16% higher than in August 2019, and September not far behind.

Other observers do not expect any significant easing in demand or rates until summer 2022.